New Delhi: On December 29, 2017, in a dry, desert near India’s western frontier, forest officials found the dismembered carcass of a large brown-and-white bird.

They quickly recognised it as one of the world’s largest flying birds, one of its most endangered species, and the bird most likely to be the first in the subcontinent to slide into extinction in 21st century.

With its distinctive bare, powerful legs, the dead great Indian bustard (Ardeotis nigriceps)--no more than 150 are believed to be alive worldwide, meaning in India and Pakistan--was found electrocuted the previous evening in the village of Khetloi near Rajasthan’s Desert National Park, which is twice the size of Mumbai and is India’s second-largest national park. The bustard lives on less than a third of the national park, where about 4% of park land is controlled by the forest department.

Now extinct across 90% of its original subcontinental range, the last stand of the bustard indicates the loss of the scrub land and grasslands where this ground-dwelling bird makes its home. Its retreat also indicates growing pressures on open land in India for mining, agriculture, grazing, power lines and other infrastructure.

The state bird of Rajasthan, the dead bustard of Khetloi was the second killed by power lines--many strung over bustard habitats nationwide are plugged into renewable energy projects--in December 2017, the fourth since June 2017 and the ninth over the previous decade. 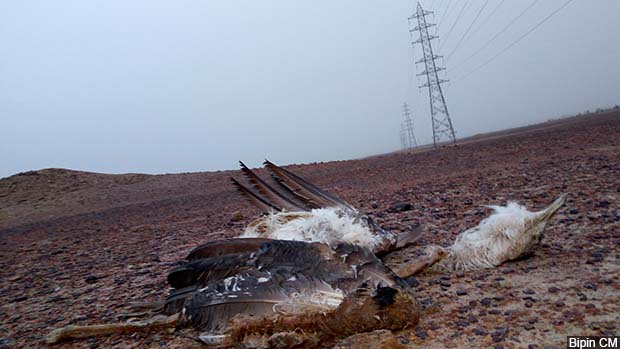 On December 29, 2017, in Khetloi village, Rajasthan, forest officials found the dismembered carcass of a great Indian bustard--the second killed by power lines in December 2017, and the ninth over the previous decade.

Bustard mortality could be higher because many cases go undetected in the remote landscapes of what is called the Great Indian bustard arc--a swathe of land sprawling across about 8,000 sq km in Rajasthan’s Jaisalmer district--said former director of the Desert National Park, Gobind Sagar Bhardwaj.

Nine dead bustards over a decade does not sound very much. But there are no more than 150 bustards worldwide, and if even a bird dies from reasons linked to human behaviour, it could be extinct within three generations, scientists had warned in this 2010 paper. That warning was reiterated in 2013 in the guidelines for the Great Indian Bustard Recovery Programme, issued by India’s ministry of environment, forests and climate change.

The great Indian bustard is classified as “critically endangered”--just short of extinction--in the International Union for Conservation of Nature’s (IUCN) Red List. Like the tiger, the bustard is supposed to be protected as a “schedule I species”--endangered, threatened or of special concern--under India’s Wildlife (Protection) Act, 1972. But the bustard isn’t as well known as the tiger, and it lives in areas where its life is in growing conflict with human development.

The main threat to the bustard comes from an ironic source: Renewable energy.

About 18,700 birds die every month on power lines in the Thar desert

Five birds of various species die per km of power line every month in the Thar desert, according to an unpublished study conducted by a team led by Sutirtha Dutta, bustard conservationist and scientist at the autonomous but government-run Wildlife Institute of India (WII), Dehradun.

From 2000 onwards, two prime habitats of the great Indian bustard have been invaded by a slew of renewable energy projects--primarily wind--located in remote, open areas, from where the electricity must be evacuated to the grid. One of these habitats is the bustard’s stronghold, Rajasthan’s Thar desert, which is home to at least 90 of the 125 birds left in India, although experts emphasise these are estimates. The second is Gujarat’s Kutch province, which hosts, perhaps a dozen birds, India’s second-largest bustard population. The Gujarat numbers are unclear: The state officially declares 40 bustards, but a 2016 count yielded no more than six birds, as the Times of India reported in November 2016.

In the southern Maharashtra district of Solapur, which wildlife experts estimate as having no more than eight bustards, power lines have killed three over the past decade. The last to succumb in September 2015 was ‘Alpha’, tagged with a geo-positionary system (GPS) transmitter linked to a satellite and was the last breeding male in the region. It was singed by a power line running close to the Nanaj Wildlife Sanctuary, 350 km southeast of state capital Mumbai.

The heavy bustards--the average male is 15 kg, heavier than a beagle--are particularly vulnerable to power lines “due to their low flight paths and narrow frontal vision”, said WII’s Dutta. Great Indian bustards are mostly ground dwellers, clumsy fliers with limited vision and tend not to spot obstacles, such as power lines, until it is too late.

These characteristics have also been observed with the Ludwig’s bustard, largest of the endemic bustard species in South Africa. Their home range in the Karoo--an open desert of extreme climates--has a high concentration of electric lines and a study in the late 1990s recorded about two Ludwig’s bustard collisions per km of high-voltage line every year.

Although Ludwig’s bustards number in the thousands, their mortality on power lines mirrors that of their Indian cousins.

Can the deaths of the great Indian bustard be prevented? Yes, said researchers.

These deaths of bustards that crash into power lines can be minimised, but a key life-saving device is not being implemented, said researchers who have mapped the “core critical areas” of the bird that need to be free of power lines, emphasising that lines in such areas should be removed or forced underground.

In Kutch, this no-go area covers about 200 sq km of coastal grasslands and those around the Lala Bustard Sanctuary and Naliya in Kutch, Gujarat. In the Thar, the great Indian bustard is concentrated mainly in a tiny swathe--about 250 sq km of 3,162 km--of the Desert National Park, while the other main population is in the Indian army’s Pokhran field firing range. The corridor that connects the two is densely packed with power lines, which kill the birds and have isolated the two populations. 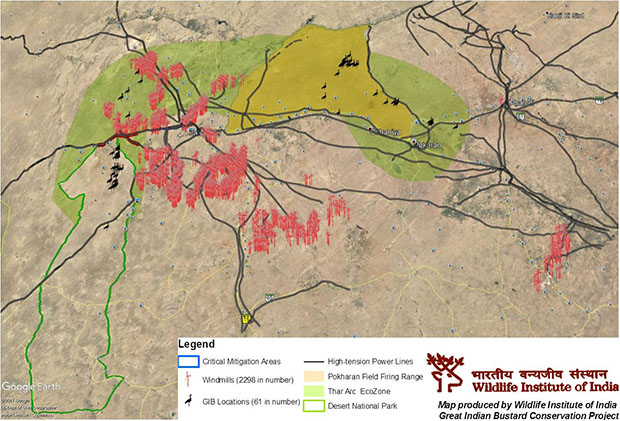 In the Thar, the great Indian bustard is concentrated mainly in a tiny swathe of the Desert National Park, while the other main population is in the Indian army’s Pokhran field firing range. The corridor that connects the two is densely packed with power lines, which kill the birds and have isolated the two populations.

The great Indian bustard does not confine itself to a park, and it is a “nomad”, said R S Shekhawat, Chief Conservator of Forests (Wildlife), Jodhpur. It flies outside either to feed on crops or look for water and thus encounters--sometimes fatally--power lines.

“There are at least about 2,000 wind turbines around the park,” said Shekhawat, adding that these were established outside forest areas, where the forest officials have no authority.

Besides, at the time--during 2000s-there was little understanding of the impact of renewable projects, perceived as green energy. The park lies in Jaisalmer district, home to the Jaisalmer Wind Park, one of India’s largest.

As much as 81% of Rajasthan’s installed renewable energy capacity is in Jaisalmer district, said Surendra Vashistha, spokesperson of the Rajasthan Renewable Energy Corporation Ltd (RREC), a government company.

Scientists also advocate the use of what are called bird-flight diverters--brightly coloured spirals of plastic or steel that repel birds and make transmission lines more visible--on existing power lines.

A meeting in June 2016--between the Rajasthan forest department, the RREC, Rajasthan Rajya Vidyut Prasaran Nigam Ltd, a government company, conservationists and wind-power companies, including some of the largest, such as Suzlon--decided that no new wind turbines would come up in the great Indian bustard arc, and mitigation measures like diverters would be installed on existing power lines. The WII would provide diverters and help with initial installations, after which the concerned power companies would take over.

Yet, 18 months and three bustard deaths later, nothing changed. No diverter had been installed by the time this story was published, although WII supplied 27 diverters by May 2017.

Speaking on condition of anonymity, an official from the RREC, the nodal agency for clearing and commissioning renewable energy, said their role is over once a power plant is commissioned. “Besides, we do not have the manpower to monitor what the companies do,” said the official.

Efforts to liaise with energy departments and companies are continuing, and a meeting of stakeholders was held on January 11, 2018, said Shekhawat, the chief conservator of forests. “Renewable energy generation projects are important but need to adopt compatible mitigation strategy in the great Indian bustard landscape to avoid bird collision and ensure the survival of these critically endangered species,” he said.

Off the record, most officials, including from the RREC, acknowledged there was little interest in safety measures due to the extra costs; the only way forward is if the state government bore the expenses.

Burying wires below ground and installing diverters has reduced bird mortality--by some estimates between 50 to 70%--in Spain of a related species, the Great bustard.

IndiaSpend’s attempts to reach Sanjay Malhotra, Rajasthan’s energy secretary, by phone and email, over five days got no response. If there is one, we will update this story.

Energy projects also spur habitat loss. For example, more than 24 bustards were sighted in two hours by G S Bhardwaj in 2013 before the installation of wind turbines in the Salkhan area, north of the Desert National Park. Since then, there is little trace of bustards, only the occasional sighting. Similarly, the Mokla grasslands--crucial because they connect two bustard sub-populations in the Thar--close to the Desert National Park also lost bustards after the installation of wind-turbines and transmission lines in early 2011.

Transmission lines, of course, are just one among a medley of threats. Once abundant across the dry bush and grassland of the Indian subcontinent, ranging from Pakistan to Odisha in the east, extending southwards to Tamil Nadu, the endemic great Indian bustard is now extinct in over 90% of its habitat. The bird vanished from Madhya Pradesh over the last decade, and Maharashtra and Andhra Pradesh with barely 3-4 birds each may soon follow.

Historically, the bird was hunted for meat. The rampant hunting--and the abundance--of the bustard is evident in a narrative in the Oriental Sports Magazine of one Robert Mansfield, who hunted between 1809 and 1829 and bagged no less than 961 great Indian bustards in Maharashtra’s Ahmednagar district, where none exist now. But the key cause of near-extinction, as we said, is the steady annihilation of the bird’s habitat--grasslands, a vibrant ecosystem harbouring rare and endemic wildlife, such as wolves, caracals, blackbucks, floricans, rhinos, and, of course, bustards.

These grasslands are crucial for humans too as an important genetic resource for ecological and food security in a country where many crops are derived from grasses. Most Indian cereals--wheat, rice, corn, barley, millets, and other foods, such as sugarcane--are derived from grass that have been selectively bred, developed and cultivated for over thousands of years.

Yet, grasslands and deserts are India’s most-neglected ecosystems, according to a 2006 report of a task force appointed by the erstwhile Planning Commission. “Grasslands are denounced as wastelands in land use policies, and continue to be diverted to infrastructural and renewable power projects without any scrutiny that are detrimental to the ecology of these systems,” said the WII’s Dutta. Pesticides and changing crop patterns--a shift to mechanised farming and cash crops--have taken a toll as well.

As Rajasthan falters in protecting its state bird, time is running out for the great Indian bustard.

(Bindra is a former member of the National Board for Wildlife and the author of The Vanishing: India’s Wildlife Crisis.)