Govt Building Homes That Poor Do Not Want 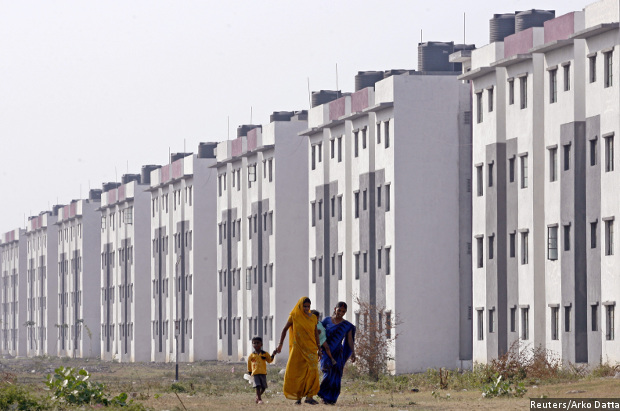 Residents walk past a block of state-funded flats for slum dwellers in the western Indian city of Surat. Slum dwellers are reluctant to move to the houses built by the government due to lack of proper infrastructure and means of livelihood, the government acknowledged in a recent reply to the Lok Sabha.

Over 10 years, the central government spent Rs 21,482 crore ($3.2 billion) building houses for the urban poor but 23% of them are vacant, according to this May 2016 answer to the Lok Sabha (lower house of Parliament).

The vacant houses include 224,000 built under the Jawaharlal Nehru National Urban Renewal Mission (JNNURM) and 14,448 houses under the Rajiv Awas Yojana (RAY)--now discontinued and subsumed into the Pradhan Mantri Awas Yojana launched in June 2015--the Ministry of Housing and Urban Poverty Alleviation said.

“In spite of the continuous efforts by the government, slum dwellers are reluctant to move to the houses built by the government due to lack of proper infrastructure and means of livelihood,” the statement to Parliament said, explaining further that the new houses often lack electricity and water, cheaply available--often through illegal connections--in slums. The new houses are usually not close to workplaces, the ministry acknowledged.

“Houses are too far from workplaces, which means additional commuting time and expense,” Kulwant Singh, India advisor, urban basic services, UN-Habitat, an agency for human settlements and sustainable urban development, wrote in this Hindu Business Line column in January 2016. “In a slum, basic amenities such as electricity and water are often acquired at dirt-cheap prices. There is a certain degree of empathy and firmness that these projects lack, which consequently takes away effectiveness.”

Maharashtra (54,282) has the highest number of vacant houses, followed by Andhra Pradesh (24,611), states in which 24% and 35% of the urban population, respectively, lives in slums.

Over the last 10 years, Maharashtra got the most money to build housing for slum-dwellers, Rs 3,246 crore, followed by West Bengal (Rs 2,384 crore). 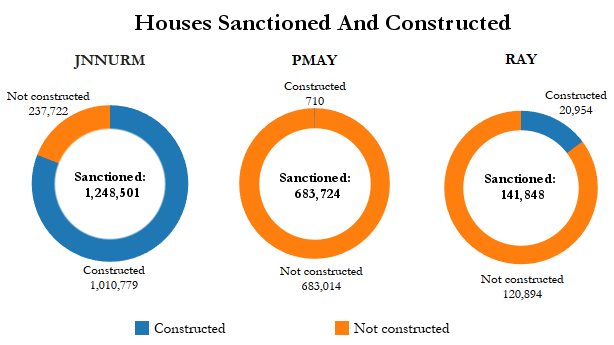 Census of India defines a slum as a residential area where “dwellings are unfit for human habitation [due to] dilapidation, overcrowding, faulty arrangements and design of such buildings, narrowness or faulty arrangement of street, lack of ventilation, light, or sanitation facilities or any combination of these factors”.

Source: 69th round of NSSO reports

Maharashtra has more slums than any state (7,723), followed by Andhra Pradesh,West Bengal, Gujarat and Tamil Nadu.

(Bhattacharyya is an intern with IndiaSpend.)