Government Spending, Agriculture Up, Manufacturing, Finance Down, As Economy Slows 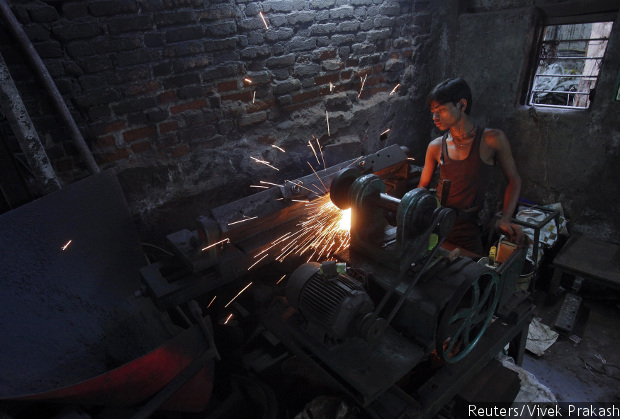 A mechanic shapes metal parts used in heavy machinery inside a workshop at an industrial area in Mumbai. India's economy slowed in the January-March 2017 quarter even as Finance Minister Arun Jaitley denied that the withdrawal of 86% of India’s currency, by value, had a role to play.

Record spending by the government and an agricultural rebound prevented India’s economic growth from dropping below the 5.6% it registered in the fourth quarter of the last financial year (January to March 2017), according to an IndiaSpend analysis of the latest government data.

Public administration, defence and other services grew 17% against 6.7% in the previous quarter (October to December 2016), and agriculture growth was higher at 5.2% as against 1.5%, even as Finance Minister Arun Jaitley on June 1, 2017, denied that the withdrawal of 86% of India’s currency, by value, in November 2016 had a role to play.

A slowdown in manufacturing, finance and trade led to a drop in a critical metric that measures goods and services produced in India--gross value added (GVA)--and resulted in India losing its position as the world’s fastest-growing major economy.

The growth in gross domestic product (GDP), which is GVA plus indirect taxes minus subsidies, has slowed to 7.1% for the year 2016-17 from 8% the previous year.

"The headline growth number conceals more than it reveals," columnist Manas Chakravarty wrote in this Mint analysis on June 1, 2017.

"If we leave out the ‘public administration, defence and other services’ component of GVA, comprising mainly government expenditure, then growth slumps to an even lower 4.1% in the fourth quarter,” Chakravarty wrote.

"Clearly, the impact of the pay hike to government personnel has bailed out the economy,” he added. “And if we leave out “public administration, defence and other services” as well as agriculture, on the grounds that agricultural growth is chiefly due to the rain gods’ generosity, then growth in the rest of the economy at constant prices plummets to a piffling 3.8% for the fourth quarter."

“There are several factors that contribute to GDP. There was impact on growth on account of other factors, even before demonetisation,” Finance Minister Arun Jaitley said on June 1, 2017, according to this Firstpost report.

Many factors can contribute to GDP in a quarter, some slowdown visible given global, domestic situation even before #demonetisation: Jaitley pic.twitter.com/NVt3wCD4AX

Here are some reactions to the GDP/GVA numbers:

This is a broad-based economic slowdown, cutting across sectors. Indicative of overall govt ineptness. Are we headed for a bigger disaster? pic.twitter.com/yHHONbSJ1v

Falling GDP. Rising unemployment. Every other issue is manufactured to distract us from this (GDP) fundamental failure: Rahul Gandhi pic.twitter.com/6u22COOI2N

Big takeaway from GDP data is collapse of construction Jan-March 2017.Fell 3.9% vs growth of ~6% in same period last year #DeMonetisation

Sorry To disappoint you Mam
But the fact is India's GDP grew at 7.1 percent in Fy 2016-17 despite #DeMonetisation and remain ahead of China https://t.co/JbqrEZoRO1

So, has demonetisation harmed the economy? The jury is still out.