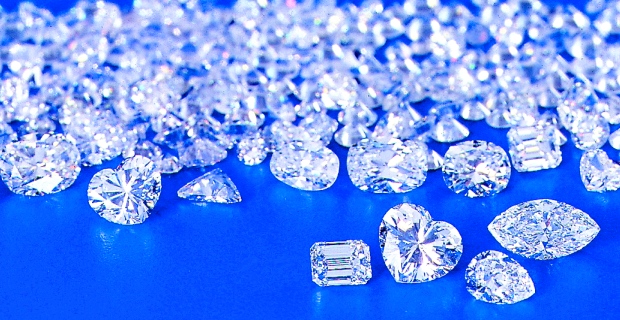 That’s according to the Statement of Revenue Foregone, a part of the Union Budget documents presented for the first time in the 2006-07 Union Budget, and a regular practice ever since.

This is not to say all such breaks are good or bad, merely to highlight what the specifics are and for those who want to ask; what specifically can we afford and not ?

Revenue foregone also tells you about the Government’s policy stance and how concessions/relaxations/exemptions are conferred upon ‘preferred’ tax payers. Such tax breaks could also be termed hidden subsidies, since they could be in the form of exemptions, special tax rates, deductions on taxable income, rebates and tax deferment or tax credits. 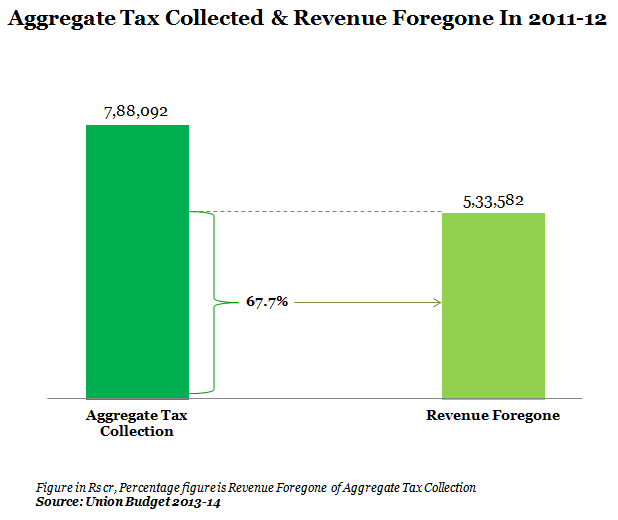 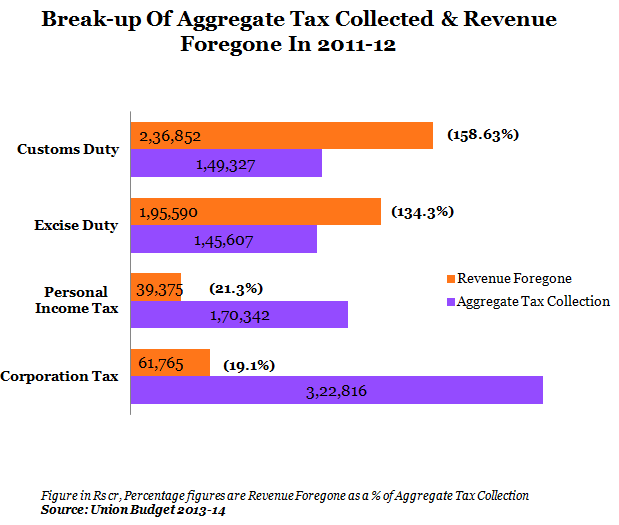 Let us now look at each category of revenue foregone: the components under the smallest one, Personal Income Tax, include exemptions given on account of investments made by tax payers in infrastructure bonds, donations to charitable trusts and institutions, contributions to political parties and higher exemption limit for women and senior citizens. This would also include a tax credit of Rs 2,000 to every person who had a total income up to Rs 5 lakh proposed in the latest budget.

The latest released figures show that the effective Corporate Tax rate (Effective tax rate in case of companies is the ratio of total taxes paid including surcharge and education cess but excluding Dividend Distribution Tax to the total profit before taxes [PBT]declined in reverse proportion to total profits.

Interestingly, the Statement of Revenue Foregone document observes that the ratio of total income to PBT is much higher (85.79%) for companies with PBT of up to Rs 1 crore than that for the total sample (70.60%). This indicates lesser deviance from PBT in case of relatively small companies as compared to larger companies owing to higher tax concessions being availed by the latter. 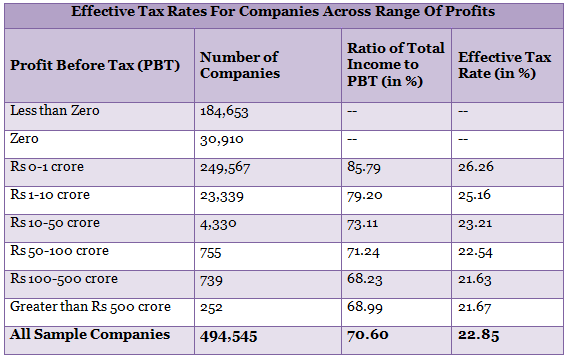 Moreover, the tax liability across companies is highly asymmetric. For instance, in FY 2011-12, 48,527 companies, with average effective tax rate greater than the statutory rate, accounted for 10.88% of total profit before taxes and 19.40% of the total taxes paid. While 263,315 companies accounting for 37.42% profit before taxes and 15.44% of total taxes paid had an average effective tax rate of up to 20%.

Major tax expenditures on corporate tax payers in terms of revenue foregone during the year 2011-12 include on account of accelerated depreciation, deduction/weighted deduction for expenditure on scientific research/housing projects/cold chain facility, deduction of export profits of units located in SEZs, deduction of profits of undertakings set-up in regions such as North-East, Sikkim, Himachal and Uttaranchal etc.

What about indirect taxes including excise and custom duty? Interestingly, revenue foregone under excise duty is greater than the actual collections (see Table 1). Considering such large exemptions are granted on inland taxes, the document does not give detailed information on its components. It only disassociates between ‘area-based exemptions’ (applicable in the North Eastern states, Uttaranchal, Himachal Pradesh, J&K and Kutch district of Gujarat) and ‘others’. The area-based exemptions account 9% of the total excise duty exemptions for 2011-12.

The largest component of revenue foregone is custom duty exemptions, i.e. exemptions on duty charged on imports. The largest share of customs duty foregone (Rs 65,975 crore or 23%) in 2011-12, is for the commodity group of diamonds and gold. 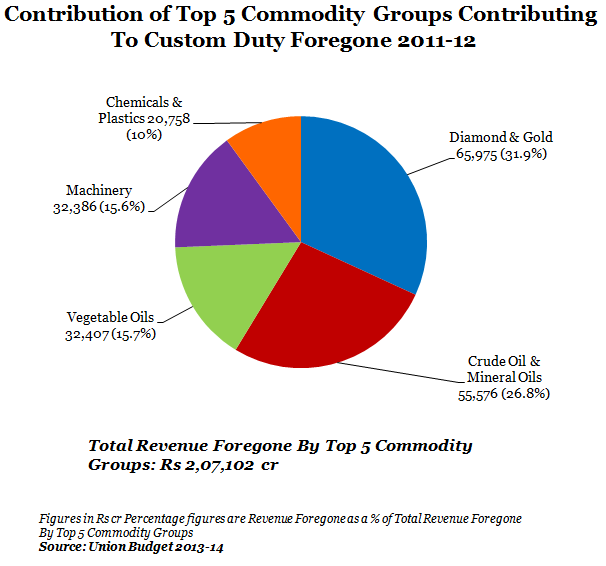 In the current and preceding years (2012-13 and 2013-14), the government has been trying everything to limit gold imports to control the current account deficit (CAD): yet this commodity has one of the largest share in terms of exemption given. In 2012-13, the estimated amount of custom duty foregone for diamond and gold would be Rs 61,035 crore or 20.5% of the total revenue foregone.