New Delhi: States with gender budgeting showed significantly greater reduction in spousal violence between 2005-06 and 2015-16 than those without it, according to a recent study using data from National Family Health Survey (NFHS) waves 3 (2005-06) and 4 (2015-16). India began gender budgeting in 2004 and currently 16 states undertake this exercise which is aimed at reducing gender inequalities at scale.

Researchers at the Center on Gender Equity and Health at the University of California, San Diego, and the International Institute for Population Sciences in Mumbai analysed the effects of gender budgeting on key outcomes related to maternal health care and women’s safety as part of the Gender Project [Gender Equity aNd DEmography Research Project] with the goal of supporting India’s achievement of Sustainable Development Goals 5--Gender Equality and Empowerment and 3: Good Health and Well-Being.

Gender budgeting: Its origins and place in India

Gender budgeting, an approach encouraged internationally since 2001, allows governments to take a fiscal path to address persistent gender inequalities that compromise health and development of nations. This typically involves one or a combination of the following three budgeting approaches: 1) gender-informed resource allocation to promote gender inclusion; 2) gender-assessed budgets where sex-disaggregated data are used to determine whether beneficiaries differ by sex; 3) gender-targeted budgeting based on a priori-determined gender needs.

In 2001, India began evaluating its economic policies with a gendered lens, to determine whether and how to better meet the needs of women and girls and to improve gender equality at scale. State-level gender budgeting followed, led by Odisha in 2004, Tripura and Uttar Pradesh in 2005, followed by Gujarat, Karnataka, Arunachal Pradesh, Chhattisgarh and Jammu and Kashmir in 2006. 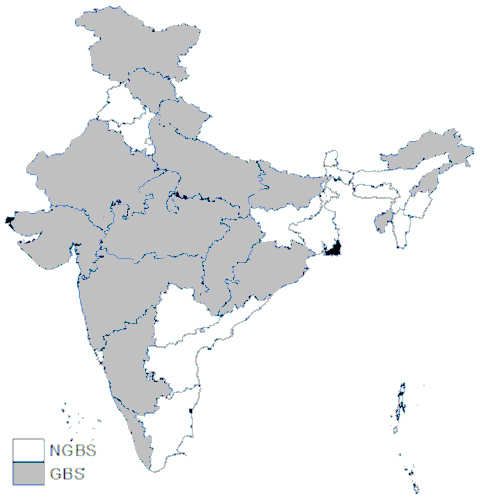 Uneven responses across the world

More than 100 countries have instituted gender budgeting, and multi-country analysis of the impact of gender budgeting shows effects in some nations, but not others. In countries showing an effect, there are documented improvements in both allocation and focus of funding as well as use of sex disaggregated data to affect policy makers’ decision-making regarding gender inequality issues and to monitor gender-budgeting impact.

Examples of nations that show impact from gender budgeting include Mexico and Brazil, where budgetary allocations to women’s health issues increased, and Iceland, where gender data guided tax code reforms to ensure economic equality by sex. Lack of comprehensive (i.e., cross-sectoral) implementation and variability in evaluation periods were viewed as reasons for inconsistent effects across countries.

In India, gender budgeting showed some promise over a decade

Research from India has found that gender budgeting is linked to improvements in girl education, especially in the field of primary education.

The Gender Project researchers tested whether gender budgeting was associated with better improvements from 2005-06 to 2015-16 for maternal health and women’s safety outcomes:

Gender budgeting states fared worse than others in 2005-06 and in 2015-16 on all four gender equality outcome indicators--ANC, institutional delivery, child/early marriage and spousal violence, though states were not significantly different on these outcomes in either 2005-06 or 2015-16 [See Figure 2]. 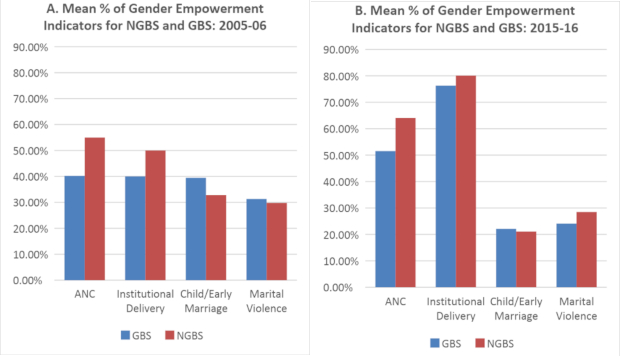 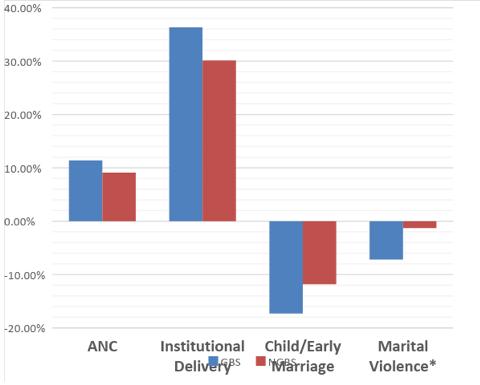 Note: t-tests were used to determine significant differences between NGBS and GBS for change over time on mean prevalence for each gender equality indicator; *p<.05, **p<.01, ***p<.001. Only spousal violence was significant.

States’ enactment of gender budgeting is linked to the demonstrated national reduction in spousal violence in India, but not to other key gender equality indicators such as uptake of maternal health services or reduction in child marriage.

Analyses of budgets in India show that while funding for women is fairly easy to identify, these funds are typically less than 1% of the total budget, and the remaining 99% of the budget is usually indicative of sectors (e.g., health, social welfare) and not easily disaggregated into gender targets or focus.

Improvements in the financing and efficiencies of schemes in the health and education sectors in the past 15 years may be a challenge to assessing the specific impacts of gender budgeting on maternal healthcare utilisation and reduction in child marriage. However, the impact of gender budgeting on spousal violence suggests that this form of budgeting can have impact beyond existing sector-wise schemes.

The findings of this study as related to spousal violence cannot be tracked back to budgetary efforts focused on spousal violence prevention given the lack of available data on this. Further research is needed to identify the mechanism through which gender budgeting may have impact on specific gender equality indicators.

Spousal violence affects almost one in three married women in India, so the value of gender budgeting in reducing its prevalence cannot be understated. But as stated earlier, comparable granular data on budgetary allocations for gender budgets is needed to help us link data findings more directly to policies. Simultaneously, researchers will need high quality gender data in a timely fashion to correspond with gender budget data for ongoing and stronger analyses. Implementation of NFHS-5 so rapidly after NFHS-4 will be a boon to these efforts.