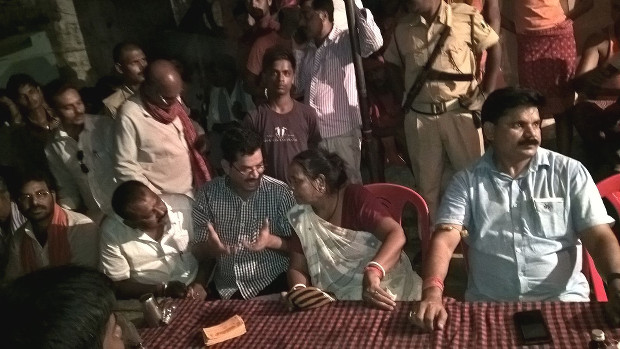 A former sweeper from a Mahadalit--or lowest of the low--castes, Bhagirathi Devi (centre), 65, is among 28 female MLAs from Bihar contesting the forthcoming assembly election of their own standing, refuting a commonly held notion that most women in politics are proxies for male spouses or relatives. Image credit: Bhagirathi Devi/Nityanand Kumar

Thirty five years ago, Bhagirathi Devi was a sweeper in the block development office in Narkatiyaganj, a town in Bihar's West Champaran district.

Today, she is a third-term member of the legislative assembly (MLA) of the Bharatiya Janata Party (BJP), representing the Ramnagar (formerly Shikarpur) constituency in northwestern Bihar, one of 34 female MLAs in the 243-member vidhan sabha.

A Mahadalit--as the Bihar government started calling the poorest of low-caste Dalits in 2007-- Bhagirathi Devi joined politics as a reaction to what she saw around her.

“I was angry at the injustice and cruelty meted out to the poor, especially poor women, who came to the block development officer’s office,” said Bhagirathi Devi, 65.

“Us din hum soch liye ki rajneeti mein jayenge aur babu logon ko sabak sikhayenge (That was the day I decided to enter politics and teach the officers a lesson)," she said.

Since 1980, when she quit her job as sweeper, Bhagirathi Devi spent the next several years creating mahila sangathans (women’s groups) in Narkatiyaganj block, organising women and stirring awareness around issues that included domestic violence, violence against dalits and fair wages.

Gradually, she expanded her political activism to other blocks in the district, going to jail in 1991 for organising demonstrations.

Bhagirathi Devi's decision to enter politics was not easy for a poor Mahadalit family with six children (her husband is a railway employee). It was particularly challenging to organise her household before she set off every day, travelling to nearby villages.

Her husband was doubtful. “Ghar dekhogi ki rajneeti karogi?” (Will you take care of the house or do politics?) he asked.

She answered, as she recalled: "Ghar bhi dekhenge aur rajneeti bhi karenge" (I will take care of the house and do politics as well).

Such was the strength of her conviction that Bhagirathi Devi seperated from her husband for the next five years, taking him back only when he realised that there was no turning back for her.

It took a decade of grassroots organising before she entered party politics, and 10 more years before she got a BJP election ticket.

Today, she is seen in the legislative assembly, the vidhan sabha, as an MLA who will not be easily silenced.

Bhagirathi Devi’s political journey, while being one of grit and determination, is also a reminder of the difficult choices women politicians, especially from marginalised groups, have to make and yet be consigned to the margins of political landscape, always spoken of as "proxies" of a male relative.

It is also a reminder of the restricted spaces for women in Bihar's--and India's--political parties, unless they are backed by political lineage.

Why Bihar’s women MLAs are not proxies

Bhagirathi Devi represents, as IndiaSpend reported, a remarkable surge in female MLAs that otherwise backward Bihar has witnessed over the last decade.

Yet, the question that is often asked is: “Are these women MLAs really empowered or are they proxies for powerful male relatives?”

The term ‘proxy’ was largely used for women in panchayats (village councils), put forward by male relatives to contest seats they had to vacate following the 33% reservation for women, announced in 1992 under the 73rd amendment of the constitution, or when the men became ineligible after criminal convictions.

The term was further made infamous by Lalu Yadav, who installed his wife Rabri Devi as Bihar's chief minister after his imprisonment in a fodder scam.

If proxies were defined as women put forward to contest elections because their male relatives had to step down, mostly due to criminal convictions, Bihar data now dispels this widely held myth.

Of Bihar's 34 female MLAs, only six have contested seats vacated by male relatives, usually husbands, according to data published on Myneta.in, a public-interest website run by Association for Democratic Reforms (ADR), an advocacy, that tracks political candidates nationwide.

The majority, 82% of women MLAs, have won elections of their own merit.

Some Women MLAs In Bihar

Widow of Madhusudhan Singh, against whom many criminal cases have been filed

Yet, the term ‘proxy’ is used for women MLAs with its undertones of gender and class bias. Media stories on female political candidates have often furthered this narrative.

The female proxies who shook off their proximity to their men

Leshi Singh,an MLA from Dhamdaha in eastern Bihar and widow of Butan Singh (against whom many criminal cases have been filed), was called his proxy long after his death, while the well-educated, male politicians who stepped in after the death of their fathers are seen as carrying forth their legacy.

Yet, for some women who enter politics sphere as ‘proxies’, it is an opportunity for political and personal advancement.

Bima Bharti, a JD(U) MLA from Rupauli in Purnia district in eastern Bihar, is a good example. She entered politics as an independent MLA in 2000, at the behest of her husband Avdhesh Singh Mandal, with pending criminal cases against him.

Barely literate, in 2010 she filed a criminal complaint against her husband for domestic violence. It led to his arrest, an uncommon occurrence in a state where politicians usually browbeat the police. Bharti went on to become a minister in the cabinet of chief minister Nitish Kumar.

From Bihar's most backward community, the rat-catching Musahars--with literacy rates between 2% and 10%, according to this paper--Jyothi Devi has a long history of organising Musahar women and children, creating anganwadis (child care centres) and self-help groups.

Yet, she is often spoken of as a relative of former chief minister Jitan Ram Manjhi, someone she must owe her political career to.

Some women are poorly educated, but many are not

If educational qualifications alone were an indicator to empowerment, then female MLAs in Bihar vidhan sabha are not doing badly: As many as 32% of them have graduate degrees and above, while 41% have some form of formal school education.

Of the rest, 17% of female MLAs have declared themselves ‘literate’, a category that could range from being able to read and write to being home schooled or self-taught.

No of women MLAs

Of 34 MLAs, three have been ministers at various times over the past five years: Leshi Singh, Bima Bharti and RanjuGeeta. Neeta Chowdhry of the JD(U) is the deputy chief whip of her party.

A battle that has only just been joined

“Hum toh zabardasti bolte hain. Hum na Lalu se darte hain na Nitish se. Vote janta deta hai. Bus hum sirf usi se darte hain (I insist on speaking I am neither afraid of Lalu Yadav nor Nitish Kumar. I am only accountable to the electorate that elects me)" said Bhagirathi Devi, when asked about the space for women to speak and intervene in the assembly.

Women MLAs in Bihar appear to have restricted speaking time in the House.

On International Women’s Day, Chief Minister Nitish Kumar had to intervene to ask the speaker to allow women members to be allowed to speak.

Lalu Yadav had famously told Bhagirathi Devi in the House that she was "like his aunt", a polite way of asking her to shut up.

While some female MLAs are indeed fronts for male relatives, they are--as we noted--a minority. Dismissing the rest as proxies will not serve the cause of governance.

(This story is the product of a collaboration between GenderinPolitics, a project that tracks women in politics and governance in India, and IndiaSpend. Bhanupriya Rao is a co-creator of GenderinPolitics. Additional research by Prachi Salve, IndiaSpend.)