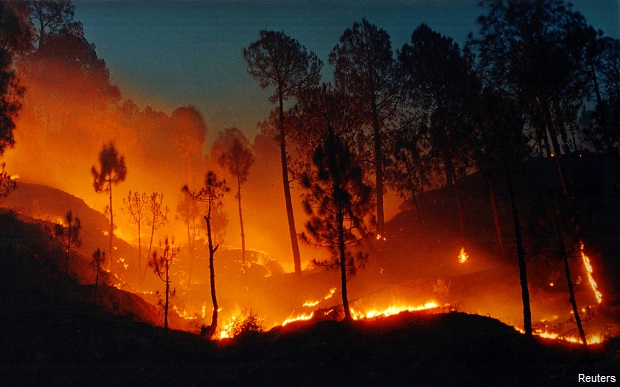 Similarly, a forest fire broke out in Bathuni in the Rajouri district of Jammu and Kashmir on May 1, 2016.

While India faces a water shortage, it cost the Uttarakhand government Rs 85 per litre of water used to douse the fire using two Mi-17 helicopters.

As many as 117,369 forest fires were reported since 2011. Forest fires are a nationwide phenomenon but they vary in intensity and nature; the season for forest fires is from February to June.

While 54% recorded forested area is prone to fire, only about 6% Indian forests are prone to severe fire damages annually.

The top five states accounted for 52% of all forest fires across the country in 2015.

"These (fires) are not new but this time due to the heat, the moisture level has reduced, which at times leads to situation like the ones in Uttarakhand and Himachal Pradesh," environment and forest minister Prakash Javadekar said on May 4, 2016.

Forest fires in Uttarakhand could melt glaciers faster—black carbon from smog and ash is covering them, making them prone to melting—experts said.

Forest fires are major causes of degradation of environment as uncontrolled fires lead to burning of vegetation and surface organic matter, increasing the frequency of flooding and causing soil erosion.

The economic loss of forest fire is estimated to be around Rs 90,000 per hectare per annum, according to the Forest Fire Disaster Management report.

Forest fires around the world

An average of more than one million hectares of forests are burnt annually due to fires in countries like Chad, Australia, United States of America, India and Canada.

Forest fires have been a seasonal phenomenon in Indonesia, caused due to the practice of slash-and-burn agriculture. More than 130,000 forest fires occurred last year, IndiaSpend reported earlier. It was also reported how Indonesian fires are affecting the global climate.

The Indonesian government estimates that 63% of its greenhouse gas emissions are the result of forest and peat-land fires.