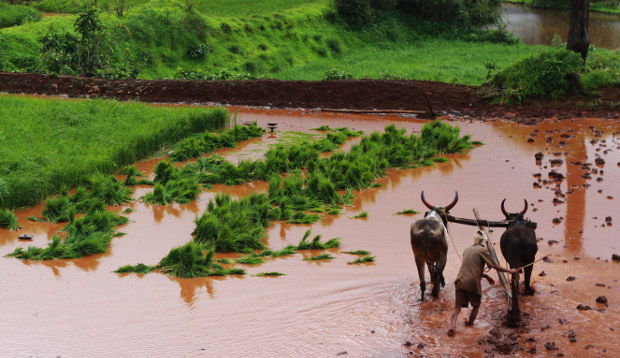 The unseasonal rain and erratic weather unsettling the Indian farmer—and the nation’s agriculture, economy and politics—are no aberrations.

Extreme rainfall events in central India, the core of the monsoon system, are increasing and moderate rainfall is decreasing —as a part of complex changes in local and world weather—according to a clutch of Indian and global studies reviewed by IndiaSpend.

The stories of Indian farmers not only indicate changes over the past three years, as IndiaSpend recently reported, but longer-term patterns in India’s agricultural lifeline, the monsoons.

Even when the average seasonal monsoon figure appear to be normal, fluctuations in rainfall in a country with 56% of sown area rainfed, can cause extreme wet and dry local conditions with wide economic, employment and social implications: about 600 million Indians depend on agriculture in India.

A wide range of reasons—including low productivity of land, market failures, debts, pests and uncertain weather—have led to a farming crisis in India, and farmer’s suicides have become a serious humanitarian and political issue for more than a decade.

As the monsoons bring 85% of India’s precipitation—all the water that falls to the ground as rain, snow and hail—fluctuations and uncertainties in weather can have serious impacts on farming.

The average total rainfall during the peak monsoon season of July and August has declined since 1951, but the variability of rain during these months has increased—deluges are more severe, and dry spells more frequent. 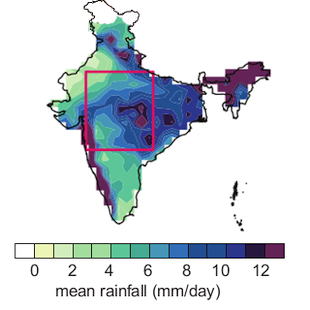 The expected distribution of rainfall across the Indian subcontinent during the peak monsoon season (July-August) is shown above. Heavy rainfall typically occurs over central India and along the Himalayas and Western Ghats. 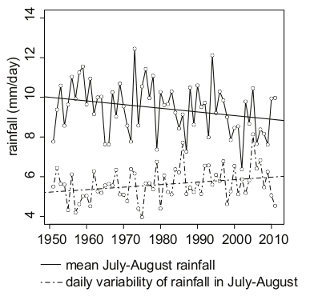 This chart shows how mean July-August rainfall and a measure of its day-to-day fluctuations (variability) over central India have changed over time. It shows an increasing trend in daily variability despite a decreasing trend in mean rainfall.

“Our study focuses on multi-day wet and dry extreme events. We look at how often and for how long such events occur, and also examine their severity (intensity),” Deepti Singh, a graduate student and lead author of the Stanford study told IndiaSpend. “Our study shows that in the historical record for which we have good observations (about 60 years), we find significant changes in these characteristics—increase in the severity (or intensity) of wet spells and in the frequency of dry spells.” 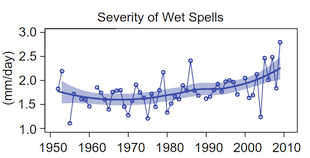 Evidence of an increasing trend in a measure of severity of wet spells over central India. Wet spells are events with above average rainfall for at least 3 consecutive days or more. 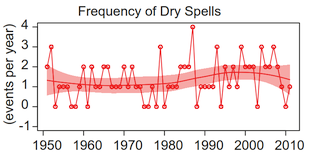 We see in this graph an increasing trend in the number of occurrences of dry spells in each year over central India. Dry spells are events with below average rainfall for at least 3 consecutive days or more. Images: Deepti Singh

The occurrence of such dry spells can be important early in the agricultural cycle: longer and more frequent dry spells can lead to widespread crop losses. “Our findings match the experiences in recent years of farmers we interviewed in several regions within India,” said Singh.

Other studies, using what is called IMD’s high-resolution daily gridded rainfall dataset, a series of detailed rainfall data, have found a similar trend of increasing uncertainty.

Prof B N Goswami, former director of Indian Institute of Tropical Meteorology (IITM) and his Indian Institute of Science (IISc) colleagues have shown an increasing trend in the frequency and magnitude of extreme rain events over central India over the past half century.

In another study, Dr M N Rajeevan, director of IITM, Pune and his erstwhile colleagues at the National Atmospheric Research Laboratory, Tirupati, reported a long-term increasing trend of 6 per cent per decade in extreme rainfall.

Such events also showed annual and decadal variations. For this study, Rajeevan and his colleagues used 104 years (1901–2004) of high-resolution rainfall data.

IndiaSpend has previously reported that scientists predict fiercer floods in the Brahmaputra and the Indus rivers.

Although scientific methods are often different, the findings are consistent with climate-model simulations run on supercomputers: That extreme events—too much or too little rain—will increase with global warming. While scientists say such links require more robust evidence, the research indicates a correlation.

Changes in extremes of rain are not always related in a simple way to changes in the mean rainfall, and, in some cases, can be opposite to a change in such rainfall. Complex, global events, along with changes in local temperatures, appear to be precursors to extreme rainfall the latest research indicates.

Annual and decadal long-term trends of extreme rainfall events are influenced by variations in the temperature of the sea surface and the heat released or absorbed by water evaporation and condensation—technically called the latent heat flux—over the tropical Indian ocean, noted Rajeevan and colleagues in their study of extreme rainfall trends.

Climate change as well as shifts in large-scale phenomena such as the El Niño-Southern Oscillation—a fluctuation of ocean temperatures in the equatorial Pacific ocean—or the monsoons, could affect the frequency and intensity of extremes in several regions, as a UN climate panel report notes.

Such large-scale influences, as well as local changes, were taken into account in a recent IISc study based on IMD data. IISc Research Associate Dr Arpita Mondal and Prof P P Mujumdar studied the summer monsoon and El Niño and found varying causes with little uniformity—except that at many locations, local temperature changes affected intensity and frequency of rainfall.

The significance of the new IISc study is that it looks at changes in three characteristics: intensity, duration and frequency of extreme rainfall. Different studies on extreme monsoon rainfall over India vary in terms of how the extremes are defined and how their changes are studied.

“Our analysis studies such variability, and we find that local effects are likely to influence extreme rainfall characteristics at small spatial scales, much more than large-scale phenomena,” said Mondal.

In short, the studies show that extreme and uncertain weather trends are increasing, and they are linked with global phenomena including climate change as well as local changes. Better and more observation, early warning and rigorous research will reveal more answers.