For First Time, A Seminal Change In India’s Agriculture 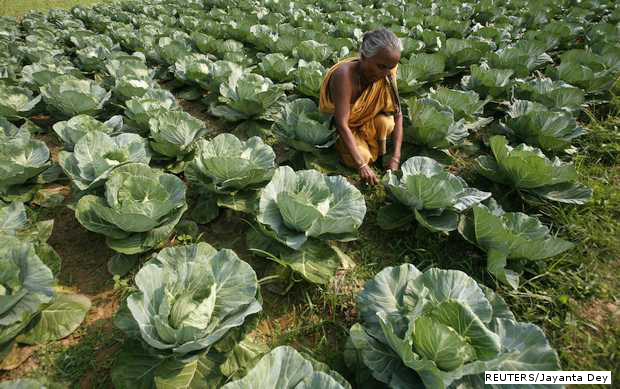 Boosted by rising demand and better storage & transport, fruits, vegetables, spices are among the new growth areas for Indian agriculture.

India is home to a variety of fruits and vegetables, and is now the world’s second-largest producer. Agricultural land under horticultural cultivation has more than doubled over the last two decades.

Famers could be moving towards horticultural production due to increased demand for healthy and fresh farm products in organised urban markets, itself a reflection of rising prosperity.

A higher shelf life of fruits and vegetables due to better refrigeration, transportation and accessibility to markets appears to have boosted horticultural production.

Lets us look at the rising trend in horticultural production vis-à-vis foodgrain.

Let us look at state-wise production of top two major horticultural contributors (i.e. fruits and vegetables) in the country.

Total fruit production in the country increased 8.5% to 81 million tonne between 2010-11 and 2012-13. India is the largest producer of mango, banana, papaya, sapota, pomegranate, acid lime and aonla.

Uttar Pradesh is the second largest producer of vegetables with 19 million tonne followed by Bihar (16 MT), Madhya Pradesh and Andhra Pradesh with (12 MT) each.

India is also the largest producer, consumer and exporter of spices in the world, with around 50 species grown in the country.

India’s productivity as much as China’s 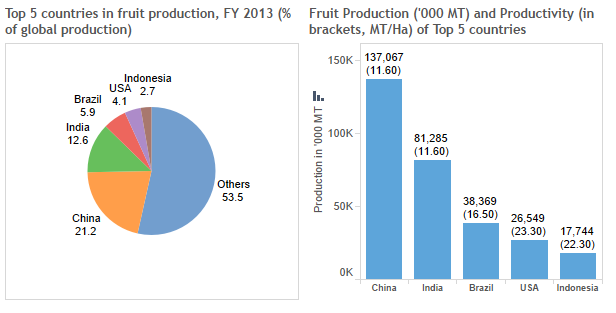 China is the largest producer of fruits with an output of 137 million tonne. Among the top five fruit producers in the world, four are developing nations. India accounts for 12.6% of the world’s total fruit production, compared with China’s 21.2%, but both countries have the same productivity rate of 11.6 MT/Ha.

India is also the largest vegetable producer after China. India produces 16 million tonne of vegetables compared with China’s 57 million tonne. India’s productivity is the lowest compared to the top 10 countries around the world with just 17.6 MT/Ha whereas Spain tops with 39.3 MT/Ha.

The export failure could be because India does not produce enough to meet its food-security norms, according to this research paper by P.K Sinha for the Indian Institute of Management, Ahmedabad. Sinha suggested that production should grow four-fold to generate marketable surplus and improve exports.

The Indian government is trying to boost exports. A Mission for Integrated Development of Horticulture (MIDH) is being implemented during 2014-15, providing new infrastructure development, market promotion, boosting quality and transport. The National Horticulture Mission, set up by the government in 2005-06, has also helped the sector evolve over the years.