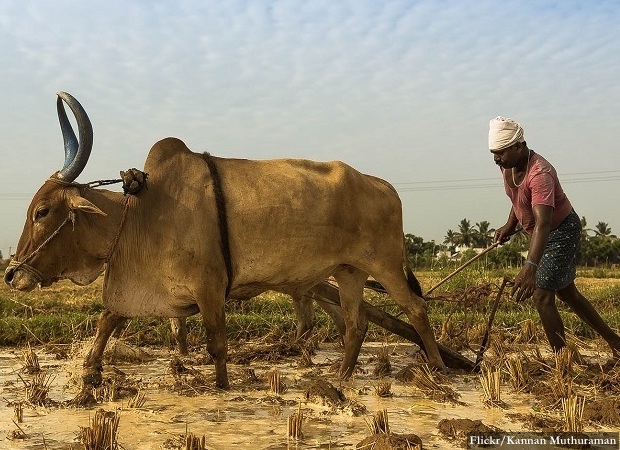 India's foodgrain production rose five times over six decades, according to 2016 government data, the latest available. But with the average Indian farm half as large as it used to be 50 years ago and yields among the lowest in developing economies, both the agriculture sector and farmers have been driven to the brink, shows an IndiaSpend analysis.

Though it is the largest producer of pulses in the world, India’s pulses crop yield (659 kg/ha) was the lowest among BRICS countries in 2014.

Cereal yield in India was the second lowest in the BRICS list, above Russia (2,444 kg/ha), according to Food and Agriculture Organisation’s 2014 data, the latest available. China reported the highest yield of cereals (5,888 kg/ha) and pulses (1,725 kg/ha) among BRICS nations.

Source: Food and Agriculture Organisation of the United Nations; Note: Figures for 2014.

The reason for the low yield is excessive dependence--52% of India’s farmland is not irrigated--on the annual monsoons, which climate change is making ever more erratic, IndiaSpend reported on June 8, 2017.

“The preponderance of small and marginal holdings makes this high volatility even more worrisome, as small and marginal farmers are highly vulnerable to adverse climatic conditions,” said the State of Indian Agriculture 2015-16 report.

Small and marginal farmers cannot afford to adopt modern techniques of irrigation and production. They also find it hard to use modern machinery on small plots. Stressed and burdened by indebtedness, successive crop failures and low yields, 4,659 farmers opted to end their lives in 2015, as IndiaSpend reported on January 2, 2017.

Why is India’s agriculture growth volatile?

The primary reason, as we discussed, is that more than half of India’s farms still depend on the monsoon, increasingly uncertain in an era of climate change. Climate change can impact crop yields, as well as the types of crops that can be grown in certain areas, by impacting agricultural inputs such as water for irrigation.

Yields in rainfed areas remain low, underscoring the importance of irrigation in the country. Similarly, rising temperatures are likely to worsen yield fluctuations of many crops, the agriculture report said.

Yield can be achieved by adopting non-conventional methods such as sprinkler, drip or micro-sprinkler irrigation, said the report.

Average farm holding shrinks by half over 50 years

About 67% of agricultural land in India is held by marginal farmers with farm size less than one hectare, while farmers with large holdings--having more than 10 hectares--constitute less than 1%.

Farmers’ capacity to invest in land has decreased due to smaller land holdings at disposal, the Economic Times quoted Prakash Bakshi, former chairman of the National Bank of Agriculture and Rural Development, as saying on August 24, 2013.

“With average land holding halved, the cost of getting inputs and time consumed has doubled,” said Bakshi. “Laws governing ownership of land has made matters worse. So a marginal farmer lets his land (lie) untilled while he seeks jobs elsewhere.”

About 52% of India’s agricultural households are indebted; with an average outstanding loan of Rs 47,000, according to Agricultural Statistics 2016 based on the National Sample Survey Office--Assessment Survey of Agricultural Households (Jan-Dec 2013).

The indebtedness varies across states, from 93% in Andhra Pradesh to 2.4% in Meghalaya.

Agricultural households with marginal holdings are the most indebted (64%) compared to just 0.6% of households holding large farms.

Nearly 70% of India’s 90 million agricultural households spend more than they earn on average each month, pushing them towards debt, IndiaSpend reported on June 27, 2017.

About 62.6 million households spending more than they earn had land holdings of one hectare or less. In contrast, 0.39% households owning more than 10 hectares of land had an average monthly income of Rs 41,338 and consumption expenditure of Rs 14,447, thereby maintaining a monthly surplus of Rs 26,941.

"Farmer suicides would not end unless and until farmers’ debt is not taken up as an individual issue," said agricultural economist Sardara Singh Johal, quoted in the Indian Express on July 26, 2017.

“Stress due to debt is an individual problem, not across the board of all farmers. Settlement, rewriting, reconciliation, debt waiver etc. should be decided on individual basis,” said Johal. “This will help the indebted persons (sic) who are stressed in reality and will be less costly for the state.”