Mumbai: With increased mobility, unprepared health facilities and the possibility of weaponising disease, a viral respiratory disease can travel through the world quickly, turning into an outbreak capable of killing up to 80 million people and wiping out 5% of the world’s economy, a new report has warned.

This is unless world leaders increase funding for disease control and coordinate their efforts to develop strategies to contain the disease, the Global Preparedness Monitoring Board (GPMB), convened by the World Health Organization (WHO) and the World Bank, said.

Drawing on the recommendations made by experts after the 2009 H1N1 influenza pandemic and 2014-16 Ebola outbreak along with other reports and data, the 15-member panel of experts, politicians and heads of agencies assessed the preparedness of countries in dealing with pandemics. The panel includes former WHO director-general Gro Harlem Brundtland and International Federation of Red Cross and Red Crescent Societies secretary-general Elhadj As Sy.

An outbreak of a viral disease such as Ebola, severe acute respiratory syndrome (SARS) and influenza will be more difficult to manage at a time when travel times are shorter than ever before, the report, released on September 18, 2019, said. Management is even more difficult in underdeveloped countries with large populations lacking access to healthcare.

Countries and donor agencies need to increase expenditure on building systems that detect health emergencies to ensure timely and adequate response and share data and resources like vaccines to minimise the spread of the pandemic, the board recommended.

Lives and livelihoods at risk from disease

Since the 1918 flu epidemic that killed 50 million people (2.8% of the population) worldwide, the population has increased over four times. In addition, a person carrying a deadly virus can travel to any part of the world in less than 36 hours, increasing the likelihood of turning a localised outbreak into a catastrophe that has the potential to destabilise the global economy.

The WHO tracked 1,483 epidemics between 2011 and 2018 in 172 countries, including SARS, Ebola, zika and the nipah virus. It detected man-made and previously unknown viruses in the last 50 years and mapped them.

Healthcare facilities are already inadequate in poor countries, making it more difficult to contain the spread of infectious diseases. A lack of trust in government agencies, such as that witnessed in Pakistan, reduces the efficacy of preventive measures. The cost of treating those affected and implementing preventive measures puts an additional strain on the economy.

The combined cost of the Ebola epidemic of 2014-16 to Sierra Leone, Guinea and Liberia--the three countries in which 99.8% of all cases--was $2.8 billion. Economic activity was adversely affected: every second Liberian worker lost their job nine months into the epidemic; tourist visits to Sierra Leone, which lost 20% of its GDP, were down by half; and government revenues from taxes fell by 4.9-9.4% in the three countries, according to the report.

In such an epidemic, as we said, India stands to lose about 2% of its GDP in a year, according to GDP forecast models used in the report. 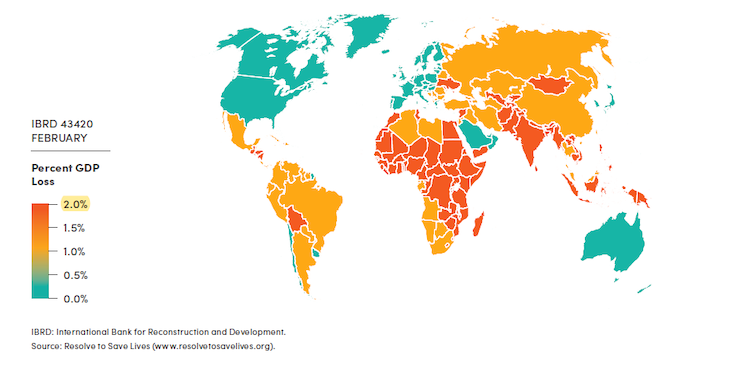 Prepare for the worst

Donors and multilateral institutions must ensure adequate investment in the development of vaccines and other treatments, increasing manufacturing capacity for vaccines at short notice during a pandemic and implementing appropriate public safety protocols, the report said.

Existing systems for responding to outbreaks are not sufficient and funds earmarked for epidemic control would fall short in the case of an actual epidemic, the report noted, adding that new vaccines, medication and diagnostic techniques need to be developed, which require research and development (R&D).

To limit the damage caused by infections, the GPMB recommended that countries, aid agencies and multilateral institutions like the WHO increase funding for R&D. In addition, developing countries’ capacities for dealing with epidemics need to be increased.

The WHO has assisted countries financially and technically to improve their health capacity. Funding for research on neglected diseases has increased 7% to reach a 10-year high between 2016 and 2017, the GPMB noted.

The world is currently in possession of a stockpile of 400 million doses of pandemic influenza vaccines with the capacity to manufacture 6.4 billion doses, which can be used to vaccinate 43% of the world’s population with two doses in the event of a pandemic. However, the ultimate aim is to develop a universal influenza vaccine, and the GPMB wants world leaders to commit to a timeline and allocate funds for developing such a vaccine by September 2020.

Diagnostic technology--which helps identify affected persons in time and test the efficacy of vaccines--is a critical investment that pays off during epidemics. The Global Influenza Surveillance and Response System has 151 laboratories in 115 countries that allows timely identification and effective monitoring of respiratory pathogens, including SARS and the Middle East Respiratory Syndrome (MERS) viruses, according to the GPMB.

Provision of basic healthcare is crucial for a country to be able to deal with health crises: Unless the most basic healthcare facilities, such as those for maternal and child health, are in place, a country cannot prepare for a pandemic, the GPMB said.

The Board called for improving health coverage and involving religious leaders, local governments and civil society to devise community-specific plans that are tested adequately before an emergency actually occurs.

Accessible and efficient care provided locally will build the people’s trust in government agencies, according to the GPMB. In addition, existing facilities and resources can be mobilised in times of emergencies, such as in Nigeria, where polio care facilities were used during the Ebola outbreak.

Investment in disease-containing capabilities pays off, as illustrated by the successful implementation of strategies that helped limit the damage caused by the Nipah virus in Kerala in India and the MERS virus in the Republic of Korea, both in 2018. In the same year, Uganda and countries bordering the Democratic Republic of Congo managed to detect and treat cases of Ebola in time, reflecting better preparedness.

National-level bodies, commissions or agencies with political authority and accountability should be set up in every country to lead efforts during health crises, the GPMB recommended. This will help avoid delays in decision making, such as those witnessed in the Ebola and Zika response.

Investing $3.4 billion in health systems will provide a benefit of $30 billion, reducing both economic and human loss, making health a worthwhile investment. Yet, the GPMB observed, governments continue to neglect health.

Poor countries are unable to deal with healthcare emergencies by themselves, putting the world at risk of a pandemic. The WHO’s contingency fund for emergencies (CFE) has been depleted after the Ebola outbreak in DRC in 2018. Member states should increase their contributions to the WHO’s CFE and also assist developing countries to develop the infrastructure required to deal with pandemics, the Board recommended.

National leaders should lead efforts, not only during epidemics but also in ensuring preparedness for health crises, the report said. In times of epidemics, the UN and WHO need to unanimously declare a leader to oversee disease control efforts.

New approaches are required to deal with health emergencies in conflict zones like the Eastern DRC and Yemen. Poverty and unstable governance can amplify a disease outbreak, making it difficult for government agencies to control it.

(Iqbal, an economics graduate, is an intern with IndiaSpend.)

Nushaiba Iqbal works as a reporter and analyst at IndiaSpend.