Five states in India now have more than 500 confirmed COVID-19 cases, and together account for nearly 60% of all cases nationwide. 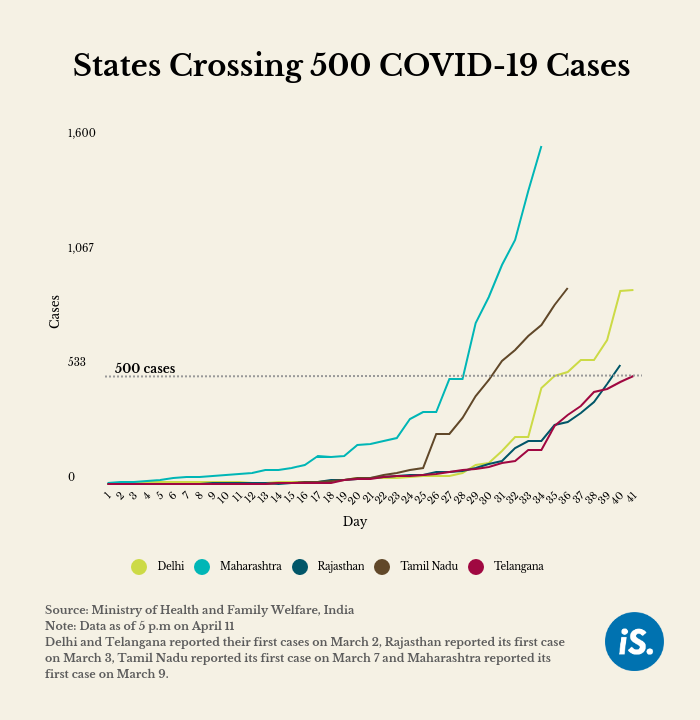 Telangana follows Maharashtra, Delhi, Tamil Nadu and Rajasthan into the list of states with over 500 cases, as of 5 p.m. on April 11, health ministry data showed. Mumbai alone has 1,182 cases--higher than any other state.

Telangana has reported two of the three deaths nationwide since 8 a.m. on April 11, taking its death toll to nine. The state’s bulletin reveals 12 deaths--11 by April 4, and the 12th on April 9. Delhi, which has 12% of all COVID-19 cases, reported one more death taking its total deaths to 14.

Maharashtra, the state with the most cases and deaths, and Karnataka have also extended the 21-day lockdown, after Odisha and Punjab announced similar extensions yesterday.

With 189 cases detected today, Mumbai’s total has now reached 1,182. Eleven more deaths took the city’s toll to 75--68% of the casualties in Maharashtra, which has reported 1,574 cases and 110 deaths, per health ministry data. Data released by the state government show 1,666 cases in Maharashtra.