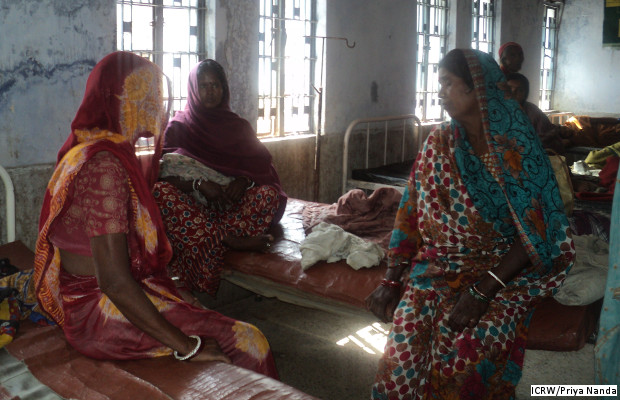 Women at a healthcare facility which was part of a study on female sterilisation in Eastern Bihar.

These were the results of an audit of public healthcare facilities offering surgical sterilisation procedures in the eastern state of Bihar, which boasts India’s highest fertility rate of 3.5 children per mother—against the all-India average of 2.4—and struggles to contain its population.

The audit is part of a five-district study conducted by the International Center for Research on Women (ICRW), based in Washington D.C. Apart from the “unsanitary environment”, the study said: “Most facilities even lack the very basic, minimum necessary equipment, drugs and supplies for sterilisation, with some lacking simple essentials, such as scissors and narrow forceps.”

The fallout: Fever, bleeding, pus and other problems

The state of healthcare facilities was worst in the largest hospitals at the main district towns. More than half of women suffered sepsis, or infections, from their sterilisation wounds. The problems included fever, bleeding, pus and problems with sutures. 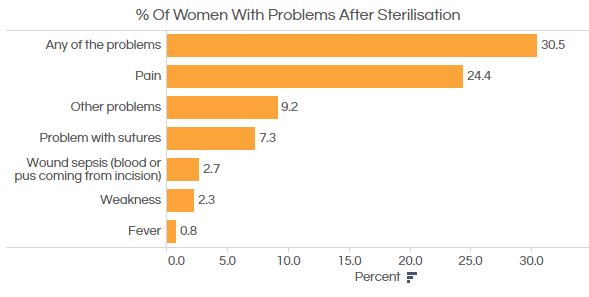 The objective of the ICRW study was to provide evidence on the gaps in family planning services for women as well as efforts needed to improve the quality of such services in Bihar.

These are some of the conclusions of the ICRW study:

In an incident that led to much soul-searching in India last year, 16 women lost their lives in Chhattisgarh to failed sterilisation procedures.

This was not an aberration, as IndiaSpend reported.

Our analysis of national health data revealed 200 deaths ever year between 2009 and 2011.

A preliminary inquiry into the Chattisgarh deaths revealed that the first camp held on November 8, 2014, carried out 137 operations, ignoring government orders restricting sterilisation operations per day to 30, India’s Minister for Health and Family Welfare, Jagat Prakash Nadda said in a statement to the Lok Sabha.

Nadda also said the operation theatre was not working, and adulterated medicine was given to the women who died.

However, larger questions emerged after the incidents regarding better practices at health centres. The ICRW report from Bihar indicates that while there have been some improvements over the years in physical infrastructure, such as electricity and water, other problems were widespread and severe.