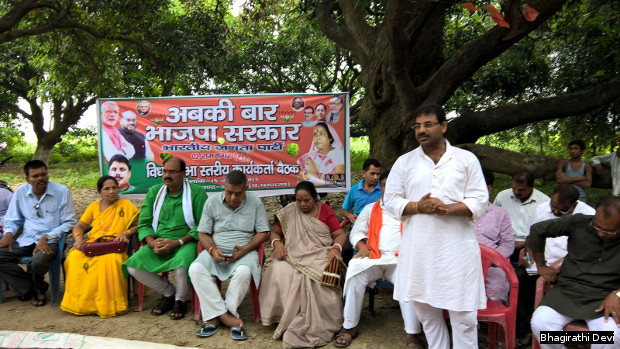 In the newly elected Bihar vidhan sabha (Legislative Assembly), women legislators have declined to 28, six fewer than the 34 elected to the last assembly in 2010.

Although still higher than the national average of 7.3%, Bihar’s position among states with female legislators has dropped to fifth from second.

As a proportion of total legislators (243), women now make up 11.5%, against 14% in the last vidhan sabha, reversing the strides Bihar was made over the last decade in female political empowerment.

As IndiaSpend reported earlier, Bihar was next only to Haryana, where women MLAs constituted 14.4% of the legislative assembly.

States with poor development indicators for women (mainly sex ratio and female literacy) have higher representation of women in their vidhan sabhas as IndiaSpend reported earlier.

Of 28 women MLAs, 10 belong to the Rashtriya Janata Dal (RJD), nine to the Janata Dal (United), four to the Congress, four to the Bhartiya Janata Party (BJP) and one Independent MLA, according to data compiled by Association for Democratic Reforms, a non-profit think-tank working on electoral and governance reforms.

Most female MLAs (25) belong to the victorious Grand Alliance including the RJD, the JD(U) and the Congress.

Fewer women MLAs are a result of fewer tickets distributed to them in the elections, as IndiaSpend reported earlier.

The BJP fielded 14 women candidates of whom four were elected, a strike rate of 28.6%.

As IndiaSpend reported earlier, Nitish Kumar of the JD(U) replaced six of his sitting female MLAs with male candidates, of which four contestants lost the elections.

The seat of Govindganj went to Congress due to seat adjustments within the Grand Alliance, and it fielded a male candidate in place of sitting MLA Meena Dwivedi.

The seat was lost to Raju Tiwari of the Lok Janshakti Party( LJP).

Eight of the 28 female MLAs won with margins of more than 20,000 votes over their nearest rivals.

The highest margin of victory belonged to Veena Kumari of the JD(U), who won from Triveniganj against Anant Kumar Bharti (LJP) by 52,400 votes.

The current vidhan sabha has fewer women with high educational qualifications than the last one.

As our profiles of Bhagirathi Devi, a four-time MLA who is fifth-standard pass and Jyothi Devi, who is 10th-standard pass show, educational qualifications are no indicator of political performance.

The JD(U) won in 11 out of 20 constituencies where the turnout of women was higher than men.

(This story is the product of a collaboration between GenderinPolitics, a project that tracks women in politics and governance in India, and IndiaSpend. Rao is a co-creator of GenderinPolitics. Saha is a freelance journalist based in Delhi.)