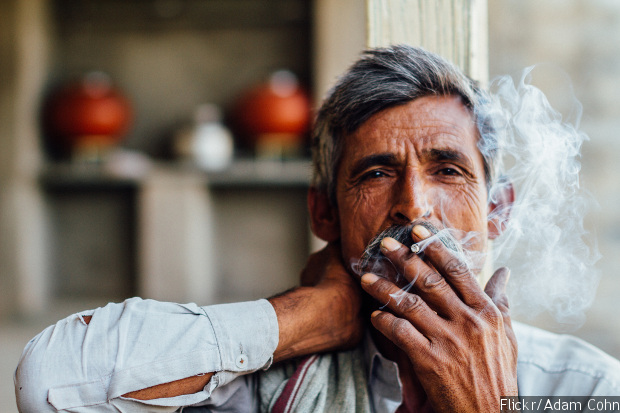 Fewer Indians used tobacco in 2015-16 than a decade ago, but only China consumes and produces more tobacco, keeping cancer rates high, according to the latest national health data.

Tobacco consumption in India is the highest in the six north-eastern states of Mizoram, Meghalaya, Manipur, Nagaland, Tripura and Assam: On average, 70.7% men here use tobacco in some form or the other, according to data from the National Family Health Survey 2015-16 (NFHS-4). This figure is 26 percentage points higher than the national average.

At 37.7%, the female average for tobacco users in Manipur, Tripura, Meghalaya and Nagaland was way above the national average of 6.8%.

Source: National Family Health Survey, 2015-16Note: Figures refer to tobacco use in any form in the age group 15-49 years.

The north-eastern states also report a higher risk for cancer--112 men and 60 women of 1,000 die of cancer here while the national average is 47 for men and 44 for women, according to the 2012 Million Death Study published in The Lancet.

Tobacco use is one of the main risk factors for a number of chronic diseases, including cancer, lung diseases and cardiovascular diseases. And not just in the north-east, elsewhere too millions of Indians continue to be vulnerable to these diseases.

The latest national average for tobacco consumption, according to NFHS-4--44.5% men and 6.8% women--is lower than 2005-06 figures. Tobacco use has fallen in India--by 12.5 percentage points for men and four percentage points for women--over a decade. But India is still the second highest producer and consumer of tobacco, according to National Tobacco Control Programme.

In 2011, the total cost of dealing with diseases related to tobacco use among the 35-69 age group in India amounted to Rs 1.05 lakh crore ($22.4 billion), according to this 2014 study by the ministry of health and family welfare. This is 1.16% of the gross domestic product and 12% more than the combined state and central government expenditure on healthcare in 2011.

The survey also shows that 29.3% female and 30.6% male tobacco users in the 15-49 age group tried to wean themselves off tobacco in the 12 months preceding the survey. In Mizoram, tobacco use has fallen by 1.6 percentage points and three percentage points for women and men, respectively, since 2005-06.

Source: National Family Health Survey, 2015-16Note: Figures refer to those who tried to stop tobacco use in the 12 months preceding the survey (in the age group 15-49 years).

Punjab and Puducherry with 19.2% and 14.4%, respectively, recorded the lowest use of tobacco among men. Fewer than 1% women in the 15-49 age group use any kind of tobacco in Himachal Pradesh, Daman & Diu, Kerala, Chandigarh and Puducherry.

Not a single state has more than 50% of male and female tobacco consumers (in the 15-49 age group) attempting to quit consumption of tobacco in any form in 12 months preceding the survey.

Why India needs to further raise taxes on tobacco products

The number of those using smokeless tobacco (25.9%) is almost double that of those who smoke (14%), according to Global Adult Tobacco Survey 2009-10.

“Tobacco is responsible for nearly 50% cancers in India and 90% of mouth cancers. Half of the mouth cancer patients die within 12 months of diagnosis,” said Pankaj Chaturvedi, professor and surgeon at the Tata Memorial Hospital in Mumbai.