Farmed Land Drops Over 25 Years, So Does Food Per Person 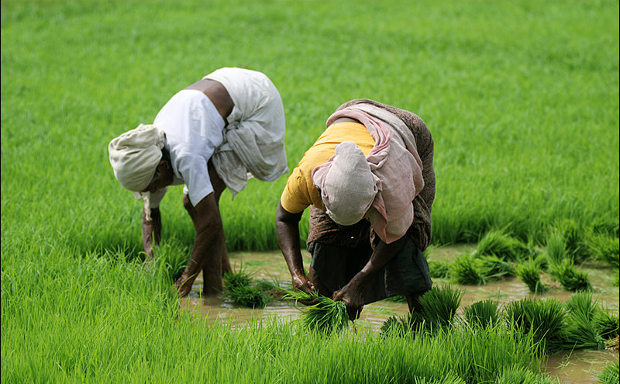 Cultivated land on India’s farms has declined 15% over 25 years, according to government data analysed by IndiaSpend, reducing foodgrain production and portending new pressures as more land is set to be acquired for industries.

Sources: Estimates of total area cultivated based on unit-level data from different rounds of NSS Surveys of Employment and Unemployment. Data on net sown area are taken from Agricultural Statistics at a Glance, Directorate of Economics and Statistics, Ministry of Agriculture, Government of India.

IndiaSpend’s recent reports have been focusing on the farm crisis in India with case studies of Bundelkhand farmers. We have also reported on the decline in farmers across India.

The Bharatiya Janata Party (BJP)-led government at the centre is trying to push through a controversial land acquisition act, and that might reduce the land available for farming.

The most controversial change proposed in the new act is the exemption of five categories of projects—industrial corridors, public-private partnership projects, rural infrastructure, public housing and defence projects—from getting the consent of 70% farmers of the area.

Reasons for the decline in cultivated land include a drop in households owning land in rural India and a decline in the proportion of households dependent on manual labour and farming, according to a study by the Foundation for Agrarian Studies, using data from the National Sample Survey Organisation (NSSO), an organisation run by the Ministry of Statistics and Programme Implementation.

To analyse how the drop in cultivated area has affected India’s food sufficiency, we matched the availability of foodgrains (cereals and pulses) to the decrease in cultivated land. The decline is clear:

Key problems with agriculture in India are related to low yields and production, as IndiaSpend has previously reported.

Let us now look at another angle: yield, which has been improving over the decades. 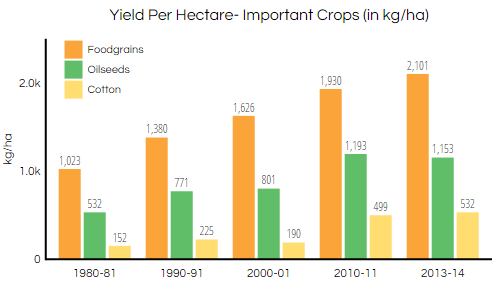 Despite its fluctuating farm fortunes, India is among world’s top producers of food crops, according to UN’s Food and Agriculture Organization (FAO).

Rank in world in production

Rank in yield among top 5 producers

While India figures among the top producers, yields across agricultural products are low, as these data show: