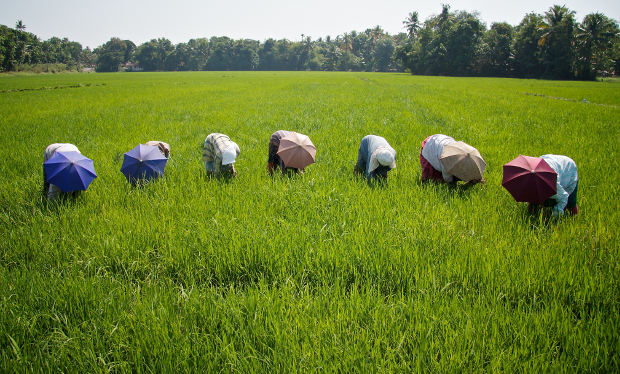 India's agriculture growth rate dropped to 0.2% in the last quarter of 2014-15, according to the latest government data, compounding predictions of a bad monsoon ahead.

The meteorological department on June 2, 2015, lowered its rainfall projections, predicting the monsoon rainfall would be 88% of normal. If this prediction pans out, 2015 will officially be a drought year, declared when monsoon rainfall shortfall exceeds 10%.

While agriculture--which supports 600 million Indians--faces significant distress, the warning signs have been evident for many years. Over the past 20 years, the farm sector has experienced negative growth during five years, three of those being drought years.

Two indicators of India's struggle to keep its people fed are foodgrain production and per capita availability of foodgrain.

Although foodgrain production increased 32% over the past two decades, the population has increased by roughly 42% over this period. Per capita availability of food grains has increased marginally, from 471 gm in 1994-95 to 511 gm in 2013-14.

With final figures for the financial year 2014-15 awaited, here is a look at India's agriculture sector over the past 20 years.

Agriculture in India is mostly weather dependent, and that is a major reason for the fluctuations in farm growth.

The year 2014-15 has not been a good year for agriculture and productivity. Our recent report shows how hunger and malnourishment are growing in India, and why agriculture needs a boost in innovation for better productivity.

Instead, India's farmers are sinking deeper into distress.

Why farmers are becoming workers

Data gleaned over last three census periods--1991, 2001 and 2011--indicate that the population of cultivators has declined and farm labourers have increased.

This indicates that more people engaged in agriculture are landless and work on other people’s land for wages.

People engaged in the farm sector are mostly unskilled workers.

Meanwhile, India's urban-rural divide appears to have widened between 1993-94 and 2011-12, according to this IIM Ahmedabad study, which indicated two trends over this period:

The increasing gap shows that instead of moving towards greater economic productivity, rural India is engaged in low wage-earning activity on farms.

Update: The copy has been updated to correctly reflect the growth rate of the agricultural sector.