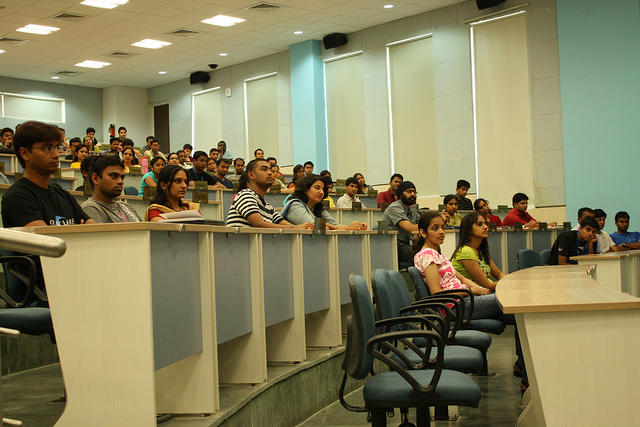 Prime Minister Narendra Modi recently urged doctors at the prestigious All India Institute of Medical Sciences (AIIMS) to stay back and serve their country. The call highlights some of the larger challenges in India's higher-education system.

And some surprising data across the board, including, somewhat depressingly in research: For instance, while 80% of students were enrolled in undergraduate programmes, only 0.3% (84,058 students) were enrolled for PhDs in 2012-13, a sure sign that research is weak and faltering; only 21% of young men and women aged 18 to 23 are enrolled for higher education; and a small state like Puducherry had proportionately more colleges than bigger states, such as Uttar Pradesh and Maharashtra, a sign of great regional disparities.

We can see that higher education has made progress in the two years under review. While all parameters have improved, the figure that really needs watching is the gross enrolment ratio (GER). The GER is the number of college students in the 18-23 age group divided by the total population of that age group (140.36 million). While it was 20.8 in 2011-12, the GER has improved marginally to 21.1 in 2012-13, according to the provisional results of AISHE.

In contrast, a report from the British Council points out that India's enrolment rate is well below the global average of 27% and low compared with 26% in China and 36% in Brazil. By 2020, the Indian government aims to achieve 30% gross enrolment, an increase of 9%.

Now, here are some other facts:

* Uttar Pradesh tops the list with the highest number of student enrolment, followed by Maharashtra and Tamil Nadu.

* While 73% of colleges are privately managed, 58% are private-unaided (no help from the government, which means higher fees for students) and 14% private- aided (government provides some grant for infrastructure development and academic activities).

Let us now look at some disaggregate data:

The Ministry of Human Resources actually tracks 11 types of universities, including what it calls "Institutes of National Importance" and others.

Now, here is an interesting bit of data: the national average of colleges per 100,000 population is 25, but a small state like Puducherry beats all the big states with 61 colleges ! The low points here are states like Bihar (6), Jharkhand (7) and surprisingly, West Bengal (9). And when it comes to gross enrolment ratio, Chandigarh tops the list with 51.3, followed by Puducherry (42.1), Tamil Nadu (42), Delhi (38.5) and Uttarakhand (33.1).

The task ahead is clearly tough. Prime Minister Modi and HRD Minister Smriti Irani have little choice but to make sure the higher-education plan works, if the government is to keep its promises for better education and jobs.