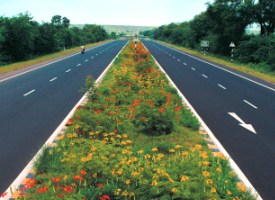 There have been charges and counter-charges between the Congress-led UPA and the BJP-led NDA about the progress (or lack of it) of road projects during the last few years.

While BJP claims that road building has come to a virtual stand-still under the UPA, the Congress is countering that more projects are being executed under their regime.

Here is a quick fact check on only one aspect – national highways - of the 3.3 million kms road network in the country.

Per day increase* (in Kms)

# refers to the fact that the road built might not have been reported.