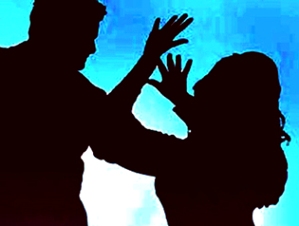 A Congress Member of Parliament and chief of the National Commission of Scheduled Castes P L Punia claimed last week that the crime rate against scheduled castes is the highest in Haryana. His statement followed a reported case of a gang rape of a Dalit girl in the state.

BJP spokesperson and Rajya Sabha MP Prakash Javdekar also claimed that incidents of atrocities against Dalits have been increasing in Haryana.

In our new series Fact Check, IndiaSpend's Danielle Collaco checks if the actual figures back the claims.

According to the National Crime Records Bureau Report on crime in India, the number of crimes against scheduled castes rose to 33,719 cases in 2011, up from 33,594 cases reported in 2010.

Haryana, which made headlines, actually had a crime rate of only 1.6, way below the national average…. and there were only 408 cases reported as crimes against scheduled castes in the state.

The graph below shows the top 3 states with the highest crime rate against Scheduled Castes in the country, along with the crime rate in Haryana 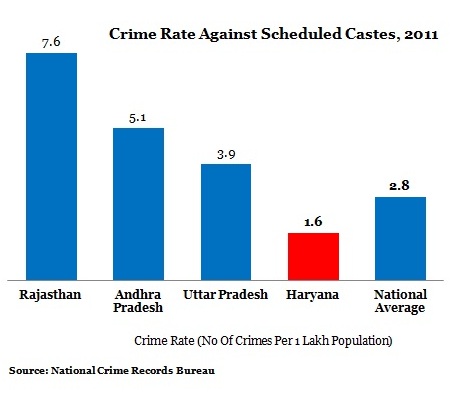 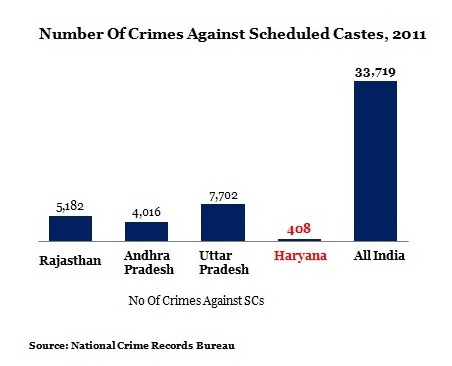 Incidentally, 1,557 cases of rape against women belonging to scheduled castes were reported in the country in 2011. This is an increase of 15.4% from the 1,349 cases reported in 2010. Uttar Pradesh reported 397 cases, accounting for 25.5% of the total cases reported in the country followed by Madhya Pradesh that accounted for 21% of the total cases, reporting 327 cases. The unfortunate fact is that rape against women from scheduled castes is rising in India, though may not be in the states that were referred to.