Fact Check: Narendra Modi on Decline in Tourists to Rajasthan 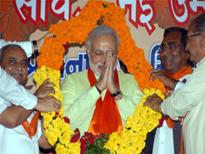 We looked at data from the Ministry of Tourism.

Foreign exchange earnings (FEE) from tourism have also been increasing for India. FEE increased from Rs 64,889 crore in 2010 to Rs 94,487 crore in 2012. The provisional estimate for the first six months of the current year (January-June) is Rs 50,448 crore.