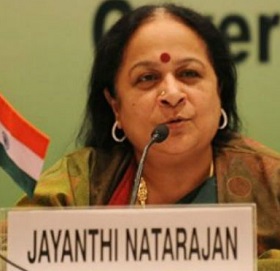 Congress leader Jayanthi Natarajan recently quit as Minister of Environment and Forests (MoEF), a move accompanied by speculation that she was shunted for stalling important infrastructure projects.

When asked, Ms Natarajan said: “No projects have been put on hold. No projects at all …” She added that “Only 8% projects come to MoEF. 92% of the projects are cleared by the states. Nothing comes to me. There are no pending projects."

How do the facts stack up ? Admittedly, it’s a little tough to establish this but let’s look at available data.

An environmental clearance (EC) is required for 39 types of projects and it covers aspects like screening, scoping and evaluation of the upcoming project.

The official line is it is conducted to assess the impact of a particular project on the environment and people and reduce its impact.

Once a company figures that their proposed project needs an environmental clearance, it conducts an environment impact assessment (EIA) study either directly or through a consultant.

Projects are divided into two categories, A and B. If the project falls under Category A, the environmental clearance lies with the central Government, and if it is B, it lies with the state Governments.

The classification of the project into A and B depends on the size and the potential impact of the project on human health and natural and man-made resources. Examples of Category A projects are ports, highways, water and sanitation and urban transport.

Category B projects are smaller in size or capacity and have potentially lower impact. Each state has a dedicated department, namely the State Environment Impact Assessment Authority (SEIAA), for the purpose of issuing environmental clearances.

This year, the central Government received a total of 1,538 proposals of which 372 were granted ECs. There are 1,128 projects that are waiting for EC at the centre at this point while there are 89 projects pending in Maharashtra and 15 pending in Karnataka.

The following table shows the clearances granted and awaited for different projects by the central Government in 2013.

So, it is clear that the former minister might not be entirely correct in saying that there are no projects waiting for EC. In fact, there are 86 projects still awaiting approval.

Let us now look at state-level clearances in 2013 for three states, Gujarat, Maharashtra and Karnataka: