The communications adviser to the Prime Minister's Office, put out a tweet on 9th April, which claimed that "India is the second fastest growing economy in the world since 2004".

An accompanying chart showed that India grew at an average growth rate of 7.28% during the period 2004-2014. The tweet obviously attracted a lot of attention with some accusing him of using manipulated data, etc. 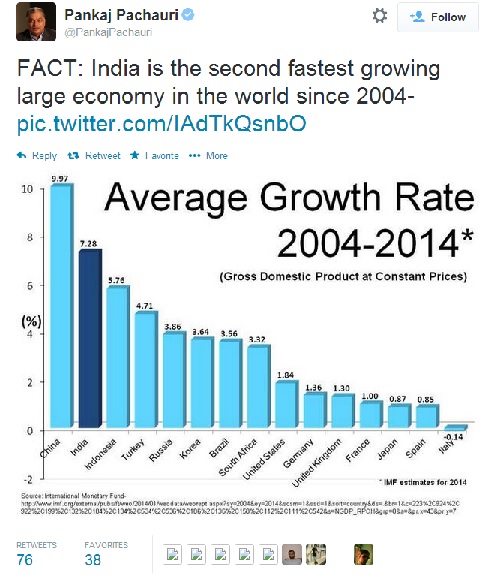 We decided to check the data available with the International Monetary Fund (IMF), and here is what we found. The data used by Pachauri seems to be from a report written by IMF economist Juan Yépez who has used a specific set of countries in his report titled: "Spillover Feature: Should Advanced Economies Worry about Growth Shocks in Emerging Market Economies?

However, if we look at the overall global growth of countries, the chart uploaded by him can be misleading. If we took the average of growth during 2004-2014, India does not feature among the fastest growing countries. The fastest growing country is Qatar (13.49%) followed by Azerbaijan (12.19%) and Turkmenistan 11.49%), which are much smaller economies. Here, India ranks 21st on the list with an average growth rate of 7.27%.