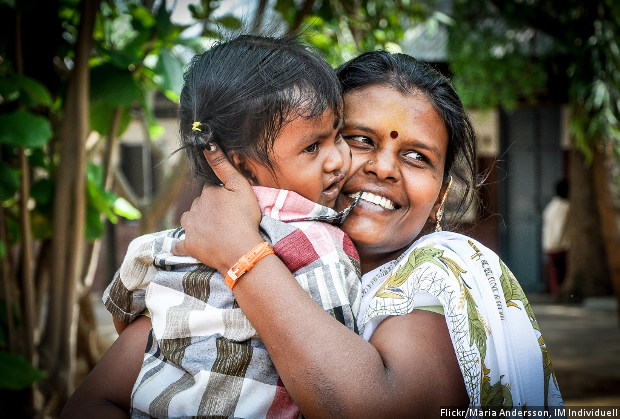 In the rural areas of Krishna district of Andhra Pradesh where we’ve been working, we found that 40% of reproductive-age women are overweight or obese (with a body mass index, or BMI, of 25 or higher; 18 to 22.9 is considered healthy in women). This rate of obesity is nearly three times higher than underweight prevalence, higher even than the average prevalence in Punjab, which leads all Indian states.

It appears clear to us that the problems of overweight and obesity are no longer limited to the urban rich in India, one of three major contributors, along with the US and China, to the world's heaviness epidemic.

The two of us have been working on under-nutrition in India and other countries for more than 30 years. We have seen plenty of overweight and obese persons, but we generally dismissed the issue as one of the consequences of urban, upper-income plentitude and one of little importance in India’s overall development.

With such numbers, and the strong association of overweight with cardiovascular disease, diabetes, high blood pressure and some cancers, India can no longer be blasé about the problem.

Obesity plagues India's affluent, as IndiaSpend reported in December 2015. This is happening as India fights a losing battle with the bulge, hosting as it does the third-most number of obese people in the world, 61 million and growing.

Low-income populations are no longer immune

Some of the overweight increases among the poor are surely due to what’s come to be known as the “thrifty phenotype” or the “Barker” hypothesis (after a late British epidemiologist), a now-proven postulate that persons who are undernourished during the foetal period, or the first two years of life, suffer biologic dysfunction as adults, including an inability to properly oxidise fat.

Commonly seen photos of an overweight mother feeding her undernourished child often suggest that the mother herself had been malnourished in her early years.

But, additionally, some of the same factors precipitating overweight and obesity in more affluent individuals also have a role with low-income families: the tendency to calm a crying child with sweets, the insidious effect of omnipresent processed foods filled with sugar and trans fats and their aggressive advertising (a downside of India’s continued integration into global food markets), alcohol, tobacco, and a more sedentary lifestyle than had earlier been the case.

Although there are no reliable national data, there is evidence from local studies that childhood obesity is growing in India, with poorer children as affected as richer children.

These trends have proven difficult to reverse, even in countries which have addressed them seriously. Yet some promising developments in these countries may have relevance for India.

The importance of anti-obesity champions

One pre-requisite to engineer change appears to be finding a champion, preferably more than one. Such a champion in the United States has been its first lady, Michelle Obama, who has made the reduction of childhood overweight and obesity the primary goal of her years in the White House, with some positive results for the Let's Move! campaign she designed.

An earlier champion was presidential candidate and former governor of the US state of Arkansas (not a state one generally thinks of as particularly innovative), Mike Huckabee. While governor, Huckabee suffered from, and then recovered from Type 2 Diabetes with the help of a nutritious diet.

Huckabee then got religion on the subject, removed the junk food-filled vending machines from schools, and required that school cafeterias serve only healthy food. (When told that the children might not eat such foods, Huckabee instinctively responded, “Then they’ll be hungry.”)

Also important are themed campaigns. One relatively successful campaign geared to the parents of children in a number of countries has the motto “5-2-1”. The meaning: Your child should consume a minimum of five servings of fruits and vegetables a day, should have a maximum of two hours of screen time daily, and a minimum of one hour of exercise.

South Korea has made its theme “patriotism”. If you are a patriotic Korean, the message goes, you will eat foods that are Korean… and not foreign fast food.

Finland, which had the highest prevalence of cardio-vascular disease in Europe, embarked on an energetic campaign--aimed at increasing energy expenditure:

The campaign was a success.

Some countries, including Mexico, have placed hefty taxes on sugary soft drinks (justifying the tax on a need to reduce public health expenditures on the consequences--the same argument used successfully to impose high taxes on cigarettes.) Some have argued that these tax revenues be used to subsidise the price of fresh vegetables and fruits in low income areas.

Other countries have placed strict controls on the advertising of unhealthy food products in the media and in schools.

These campaigns, though challenging, are doable (India has overcome greater challenges in its recent history). They are certainly far preferable to the increasing tendency among India's rising middle class to splurge on unhealthy processed food and then opt for the latest quick fix: Bariatric weight-loss surgery.

Perhaps the time has come for India to consider seriously a national effort to address this problem of overweight and obesity which is now imperilling the well being of all of the country’s economic and social classes--and contributing dangerously to national health costs.

Adding such an effort to the still desperately needed assault on under-nutrition in the country--the two now frequently referred to as “the double burden of malnutrition”--is likely to pay valuable dividends for the country and its people.