Conservationists have called cheetah translocation a vanity project to grab eyeballs. We explain why

The project is scheduled to be launched by Prime Minister Narendra Modi today, on his birthday, September 17, in what is being termed as a first-of-its-kind conservation project for cheetahs, as well as for grasslands which make up their natural habitat.

But experts say that India does not have the habitat or prey species for wild, free-roaming African cheetahs, the project will not fulfil its aim of grassland conservation, and that conserving other threatened species, such as caracals and the Great Indian Bustard, should be the priority.

The name "Cheetah" originates from Sanskrit and means "the spotted one", and the species is depicted in ancient Neolithic cave paintings in central India. The subspecies found in Iran at present is the same one that disappeared from India in the 1940s, and were officially declared extinct in 1952. The last cheetahs in the wild in India were recorded in 1948, when three cheetahs were shot in the Sal forests of Koriya District, Chhattisgarh. There were a few sporadic reports of sightings from the central and Deccan regions till the mid-1970s.

The cheetah (Acinonyx jubatus) is listed as 'vulnerable' in the IUCN Red List of Threatened Species of 2021. There are only 6,517 mature individuals left in the world. The cheetah is native to countries including Botswana, Chad, Ethiopia, Iran, Kenya, Namibia, South Africa and Zimbabwe. In Asia, cheetahs are now confined to Iran, and comprise the subspecies A. j. venaticus, commonly known as Asiatic cheetah. A recent review showed that there are less than 50 mature cheetahs in Iran now.

Considering how few Asiatic cheetahs now survive in Iran, it could not be considered for translocation to India. Therefore, the Indian government decided to undertake the transcontinental translocation of the African cheetah to India instead.

The history of the project

Discussions to bring the cheetah back to India were initiated in 2009 by the Wildlife Trust of India. Experts from across the world and government officials decided to conduct site surveys to explore the potential for reintroduction.

The former cheetah range states of Gujarat, Rajasthan, Chhattisgarh and Madhya Pradesh were prioritised. Amongst the 10 surveyed sites of the central Indian states, Kuno Palpur National Park (KNP) in Madhya Pradesh was rated the highest because of its suitable habitat and adequate prey base.

KNP is spread over 748 sq km, is devoid of human settlements, forms part of the Sheopur-Shivpuri deciduous open forest landscape and is estimated to have a capacity to sustain 21 cheetahs. Kuno is probably the only wildlife site in the country where there has been a complete relocation of villages from inside the park. Kuno also offers the prospect of housing the four big cats of India--tiger, lion, leopard and cheetah--and allowing them to coexist as in the past, a government release notes.

The Supreme Court (SC) put an end to these talks in 2013. In an ongoing matter related to the relocation of Asiatic lions from Gujarat to KNP, the SC came down heavily on the plan of the Ministry of Environment, Forest and Climate Change (MoEFCC) to introduce the African cheetah from Namibia into India. It noted that Kuno is not a historical habitat for African cheetahs, and that a detailed scientific study was not done before introducing this foreign species to India.

"At this stage, in our view, the decision taken by MoEF for introduction of African cheetahs first to Kuno and then the Asiatic lion is arbitrary and illegal and clear violation of the statutory requirements provided under the Wildlife Protection Act. The order of MoEF to introduce African Cheetahs into Kuno cannot stand in the eye of Law and the same is quashed," the Supreme Court stated in its order in 2013. The Asiatic Lion is an endangered species and exists as a single isolated population in Gujarat.

In January 2020, in a matter where the National Tiger Conservation Authority approached the SC again for the reintroduction of cheetahs in India, it was submitted that the African cheetahs will be introduced on an experimental basis in a carefully chosen habitat. The SC finally allowed this the same year, while appointing an expert committee to decide on the viability of introducing the African cheetah on a larger scale. The committee included M.K. Ranjit Sinh, former director of wildlife preservation, Dhananjai Mohan, chief conservator of forests (Uttarakhand), and Director General (Wildlife).

The Indian government released a cheetah action plan in 2021. Cheetahs were supposed to be introduced in India by August 15, 2022, which marked 75 years of Independence, but delays pushed the launch by another month. The cheetahs have finally been flown in from Namibia this morning after the Madhya Pradesh government spent hectic weeks preparing for their arrival.

The eight cheetahs (five females and three males) have been brought in a modified passenger jumbo jet that left from Windhoek, Namibia on September 16. The aircraft flew overnight and arrived in Gwalior this morning and thereafter the cheetahs are being transferred to Kuno National Park via helicopter. To know more about the cheetahs, read our tweet thread here.

This transcontinental translocation is a major step for Namibia as well, as it will be the first time the wild Southern African cheetah is translocated anywhere in the world. "The cheetahs on this flight are not just the founders of a new population but explorers and goodwill ambassadors for an entire species," stated a press release by the Cheetah Conservation Fund which is overseeing this project. Vets had full access to the cats in the non-stop flight and now the Indian authorities will undertake a 'soft release' of the felines in a 6 sq km enclosure after they are radio-collared for monitoring.

Based on carrying capacity estimates, the potential cheetah habitat covering over 3,200 sq km (up from the current 740 sq km) in the Kuno landscape, with restorative measures and scientific management, could provide a prey base for up to 36 cheetahs.

The project has a budget of Rs 39 crore ($5 million) for a period of five years. India aims to allow the cheetah to perform its functional role as a top predator, and to provide space for the natural expansion of the cheetah within its historical range, thereby contributing to its global conservation efforts. Another major objective of this project is to use the cheetah as a "charismatic flagship and umbrella species" to garner resources for restoring open forest and savanna systems that will benefit biodiversity.

The central government has undertaken an awareness campaign in schools for cheetah conservation from September 9 onwards, involving more than 17,000 students across 12 states. Public awareness campaigns have been formalised for the local communities, who will be termed as Cheetah Mitras, with a local mascot named "Chintu Cheetah".

In saving cheetahs, one would have to save not only its prey-base comprising certain threatened species, but also other endangered species of the grasslands and open forest ecosystems, some of which are on the brink of extinction, the government's action plan had noted. "Amongst these are the caracal, the Indian wolf and three endangered species of the bustard family- the Houbara, the lesser florican and the most endangered of all, the great Indian bustard (GIB)."

The government's criteria for the project's success for the short term includes 50% survival of the introduced cheetah for the first year; cheetahs establishing home ranges in KNP; successfully reproducing in the wild; survival of wild-born cheetah cubs to more than a year, and F1 generation, that is, the first offsprings breeds successfully.

The project will be considered a failure if the introduced cheetahs do not survive, or fail to reproduce in five years among other things. "In such a case, the program needs to be reviewed for alternative strategies or discontinuation," the action plan has recommended. 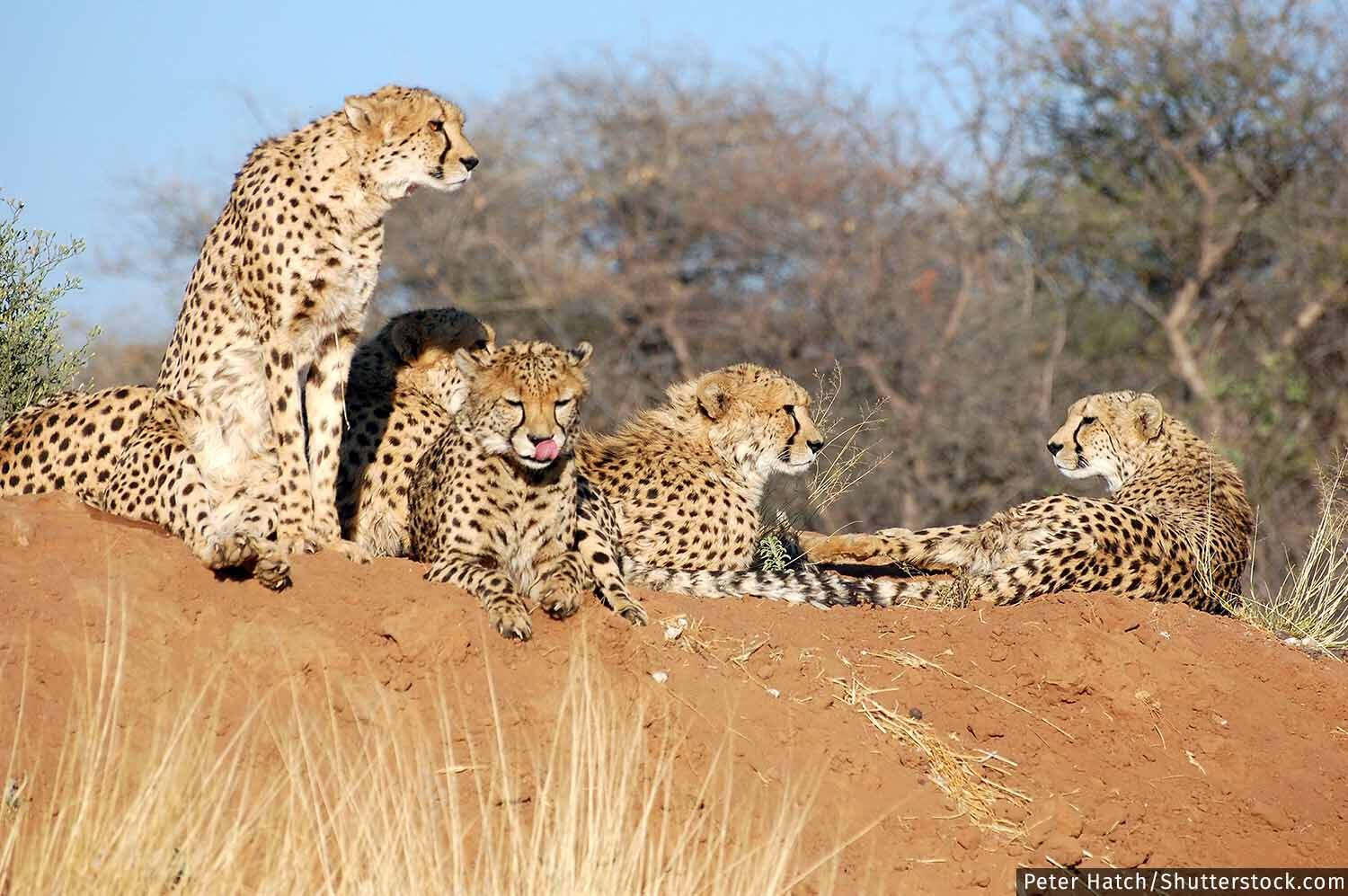 Senior conservationist and author of around 40 books on wildlife Valmik Thapar is unsure whether the cheetahs will survive in the wild in India.

"We do not have the habitat or prey species for wild, free-roaming cheetahs," Thapar told IndiaSpend. "The authorities have no experience or understanding of cheetahs in the wild. African cheetahs, if released into Kuno, will survive only in the short term and that too if frequently baited. India was never the natural home of African Cheetahs. They were imported, domesticated and trained to hunt. They were pets for royalty. Historically, for 300 years we have had no healthy population of cheetahs besides runaways from people's homes. I expect nothing from this project and believe we should look after our own indigenous species and not focus money or manpower on exotic aliens."

Wildlife biologist and conservation scientist Ravi Chellam, who has been advocating for the translocation of Asiatic Lions in KNP, believes that the cheetah introduction project is a bid to stall the Asiatic Lions from being moved out of Gujarat.

"This poorly planned cheetah introduction is taking place to stall lion translocation. Where is conservation, science or logic in it? They have decided to keep the lions in Gujarat, despite the clear SC order," said Chellam.

Explaining why he thinks the cheetah introduction is a vanity project, Chellam said that if in 15 years India will have only 21 cheetahs under the best-case scenario, how will that establish cheetah as a top predator and also save grasslands? The average area required for a single cheetah is 100 sq km, which means Kuno can support only seven to eight cheetahs, added Chellam.

"The cheetahs will require intensive hands-on management over decades. The government has still not implemented the 2013 court order to translocate Asiatic lions, of which there are only around 700 in the world, from Gir, Gujarat to KNP but they are quick to implement a 2020 order to bring in cheetahs from Africa, which number around 7,000 in the world. Which is more endangered? They claim not to have funds to bury power lines in the habitats of the Great Indian Bustard but they have the required money for this extremely expensive trans-continental movement of cats?" asked Chellam.

Prerna Singh Bindra, wildlife conservationist and former member of the National Wildlife Board (NBWL), also said that she wouldn't classify the cheetah translocation project as a conservation project.

"If we talk about conservation priorities, there is only one single isolated population of the Asiatic lion making it vulnerable to extinction for reasons like a disease. In 2018 there was a canine distemper breakout in the Gir population, underlying the urgency for a second home for the lions," Bindra said.

"We are grappling with many complex conservation problems--human-wildlife conflict, loss and fragmentation of habitat, poaching etc. Such projects (like the cheetah)--though sexy--are a distraction to our core objective of conserving wildlife and ecosystems. Another issue is the Cheetah is one of the widest-ranging of big cats, and known to travel across areas in excess of 1,000 sq km in a year. Historically, India has lost about 90% to 95% of its grasslands, 31% in a decade between 2005-15--so where will the cheetah roam, if it were ever returned to the wild?" asked Bindra.

Instead, Bindra believes that India needs to first save its grasslands--and not consider them wastelands. Our grasslands have an amazing array of charismatic, and endangered species such as Great Indian Bustard, lesser Florican, wolves etc., and our priority should be to conserve them, she said.

IndiaSpend has written to the MOEFCC on the concerns raised by experts regarding the survival of the cheetahs, and has asked whether the translocation of Asiatic lions is being stalled. This story will be updated when we receive a response.

Preeti Yadav, an intern with IndiaSpend, contributed to this story.

Tanvi Deshpande is a special correspondent (environment and climate change) at IndiaSpend. She is based in Mumbai.