‘Expect Migrant Suicides; 30% To Not Return To Their Workplaces’

Bengaluru: As thousands of migrants travel back to their home states, 30% of them will not return to their work destinations and there “could be migrant suicides in the future”, migration experts said during a webinar conducted by Indian Institute of Health Management Research (IIHMR) university on COVID-19 and challenges of reverse migration.

Due to the hardships caused by the loss of livelihoods, “migrating communities should be paid at least Rs 6,000 per month, as there is no short-term policy for them”, said Ram Bhagat, professor and head at the department of migration and urban studies at the International Institute for Population Sciences.

More than 3,500 Shramik Special trains have transported nearly 4.8 million migrants, as of May 27. 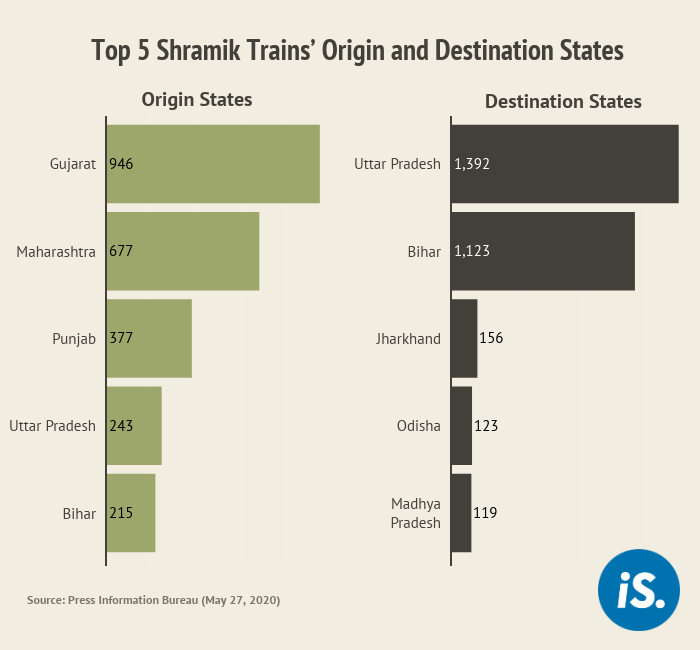 This migration will see a labour crunch in cities such as Mumbai, Delhi, Bengaluru and Hyderabad, according to Irudaya Rajan, professor at the Centre for Development Studies, adding that there could be “migrant suicide in future”.

There are upwards of 60 million migrant workers in Mumbai, Kolkata, Hyderabad, Chennai, Bengaluru and Delhi, IndiaSpend reported on March 28, 2020. COVID-led economic distress has caused a sharp slowdown in global economic growth, and India is no exception to this. Due to the lockdown and lull in economic activity, India’s economic growth will be in the “negative territory” in 2020-21, the Reserve Bank of India has noted.

“The imposition of the lockdown as a measure to contain the exponential progression of the COVID-19 pandemic has hit the unskilled and semi-skilled migrant workers the most,” said Dhirendra Kumar, professor, IIHMR.

The fiscal stimulus of Rs 20 lakh crore announced by the government contains “nothing for the migrants”, said Rajan, “To bring migrants back to work, employers should pay them two-months’ arrears and three-months’ advance salary in their bank accounts and should apologise for their bad behaviour.”

“This stimulus is only about 2% to 2.5% of the GDP”, and is “just half of what was declared in the aftermath of the 2008 economic crisis”, economist and labour expert Santosh Mehrotra had told IndiaSpend on May 24, 2020.

More than 90% of India’s workforce is informal and many of the workers are migrants. “The people who are in the process of reverse migration are mostly daily-wage workers who are doing dangerous, demeaning and difficult work and should be called as City Makers but they even lack statistical inclusion,” said Bhagat during the webinar. While everyone fears that migrants will carry COVID-19 to rural areas, “let’s be clear that they are not carriers but victims”, he said.

Through the Rs-3-lakh-crore package, micro, small and medium enterprises should be encouraged to set up in rural areas, and problems such as rural connectivity, planning and facilities for running businesses should be resolved so that “migrants are able to survive”, Bhagat added.

While the lockdown and consequent reverse migration has taken many migrant lives in transit, the “government should intervene and identify bad employers and ask them to shut their business”, Rajan said.