Bengaluru: Erratic rainfall this monsoon damaged 25% of the kharif (summer) crops sown in the districts along the Kaveri river basin of southern and interior Karnataka, according to a local farmer’s collective. The farmers here had postponed the sowing of these crops to August because June and July, traditional sowing months, had reported scanty rainfall. But torrential rains in August destroyed a quarter of the crops, both young and mature.

The southern areas of the Kaveri basin reported a 28% rainfall deficiency and central areas 22%, according to the India Meteorological Department (IMD). But August recorded a 102% “large excess”.

“The amount of rainfall that Karnataka receives over four months was received in two months this time,” said Sekhar Muddu, professor, Department of Civil Engineering & Interdisciplinary Centre for Water Research (ICWaR), at the Indian Institute of Science (IISc) in Bengaluru. 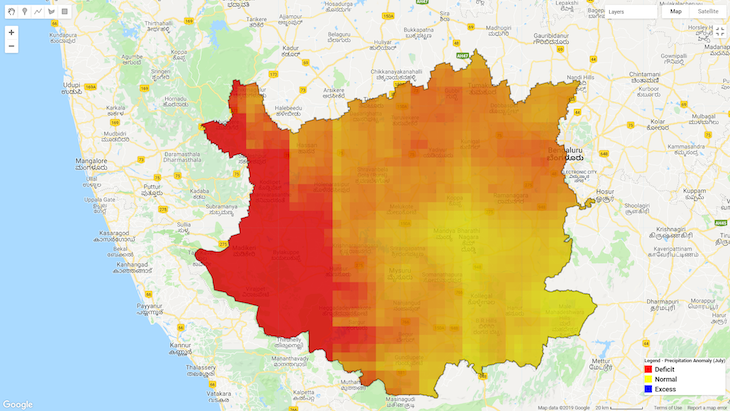 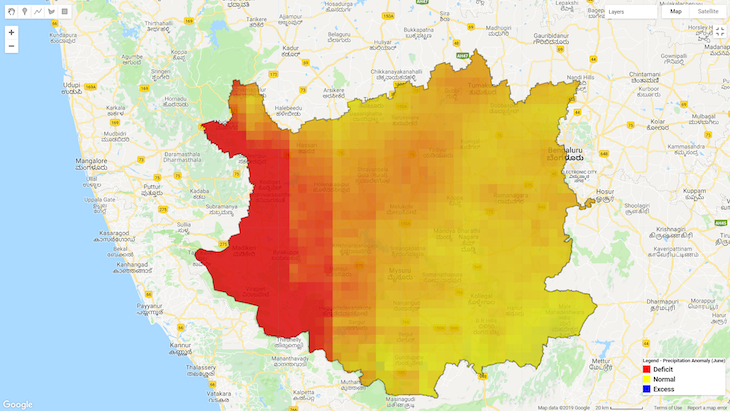 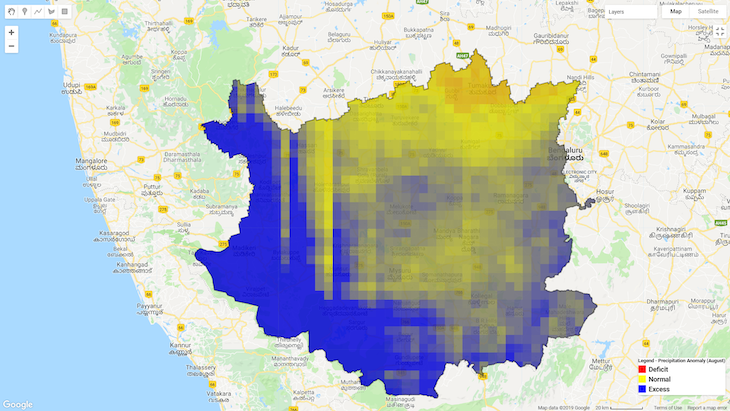 “June and July pointed at drought-like situations for the Kaveri,” said Raj Bhagat Palanichamy, a GIS (geographic information system) and remote sensing analyst with World Resources Institute (WRI), India. “And a single event [rainfall in August] filled all the dams in the basin. Farmers cannot be prepared for such extremes.”

Core catchment areas, Kodagu and Hassan, saw a huge fluctuation, he added. These sharp spikes were “problematic because the river originates in this area and its impacts are felt across the basin”, he said.

The rainfall anomaly in the Kaveri basin is part of a larger trend where climate change, along with factors such as rampant deforestation and developmental activities, results in spells of torrential rain interspersed with unusually dry periods. This rainfall pattern is affecting lives and livelihood in other parts of India as well, as IndiaSpend reported in May 2019 from Rajasthan.

Extreme rain events over central India tripled between 1950 and 2015, according to a 2017 study led by researchers at the Indian Institute of Tropical Meteorology (IITM), Pune, affecting about 825 million people, leaving 17 million homeless and killing about 69,000, as IndiaSpend reported in August 2018.

The Kaveri basin extends over an 85,000-sq km region--roughly 2.5% of the country’s total geographical area--and comprises areas that feed the river and its tributaries. The basin supports around 50 million people and irrigates an area of about 81,155 sq km across Karnataka, Kerala, Tamil Nadu and Puducherry.

The main reservoirs in the basin are Harangi, Kabini, Hemavathi and Krishna Raja Sagara (KRS) in Karnataka and Mettur and Bhavani in Tamil Nadu. 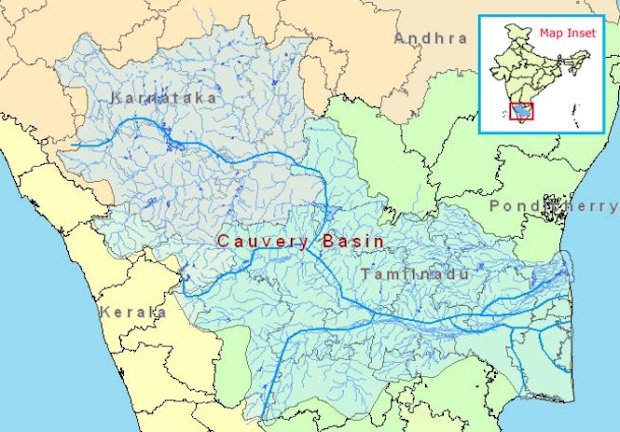 Around 66% of the Kaveri basin is covered by agricultural land, extending largely between Karnataka and Tamil Nadu. Overall, the Kaveri basin recorded a 5% excess rainfall this monsoon. All the reservoirs in the Karnataka part of the basin were at full capacity as on September 19, 2019, according to the Central Water Commission (CWC).

“The planting season for kharif crops in the Karnataka part of the basin begins between May and July. But in many places, the soil moisture content during this time was very low,” said Muddu of ICWaR. This content shows the spread of moisture across the region and is indicative of current rainfall patterns. 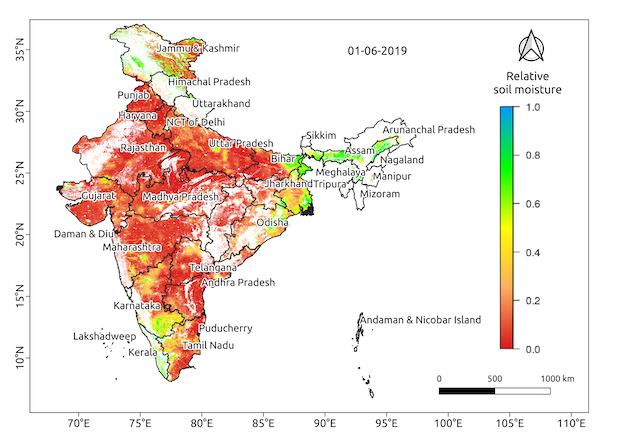 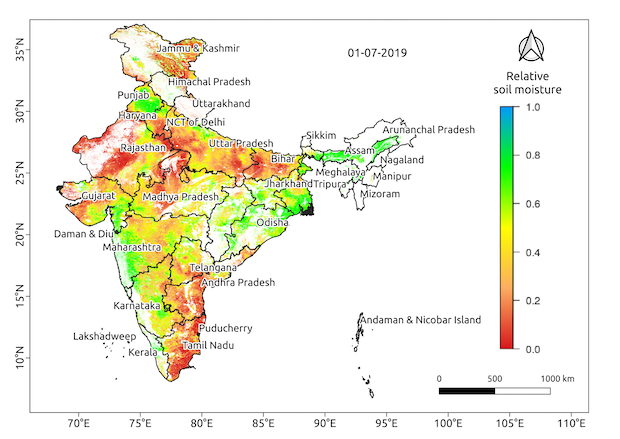 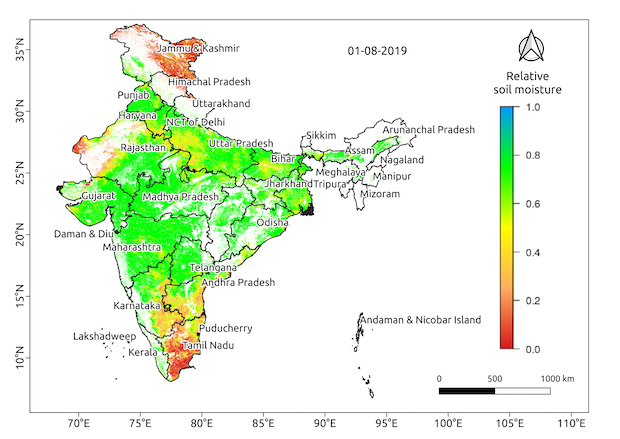 “June and July were very dry,” said Shantakumar, president of the State Farmers’ Federation, a collective of farmer welfare organisations in Karnataka. “Our farmers did not cultivate crops during these months.”

Sowing of crops like paddy, sugarcane and ragi was thus pushed to end-August across Mandya, Mysore, Chamarajnagar, Madikeri and Hassan. “Because of late cultivation, there was a loss of yield of about 25%,” he said. 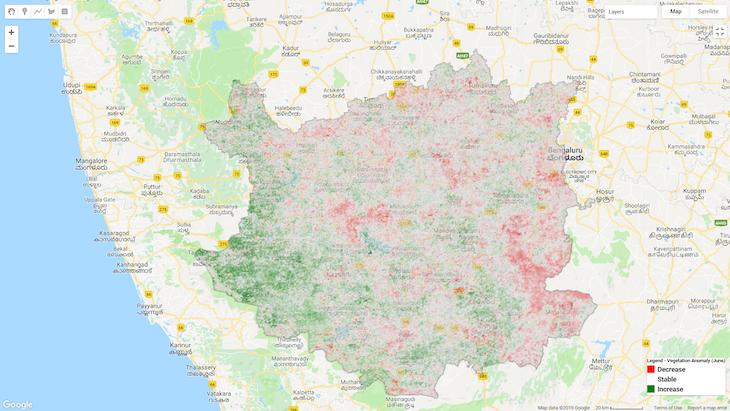 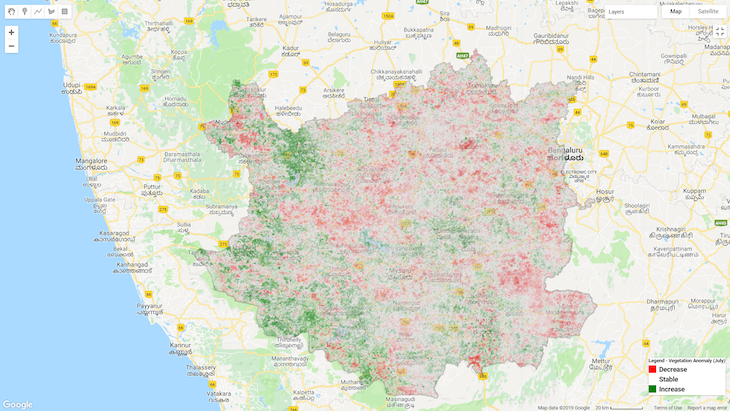 Mature crops were affected too

“A lot of the sugarcane that was planted last year and was ready for harvest around June dried up because there was no rainfall,” said K S Sudhir Kumar, a farmer from Mandya, who is also the secretary of Akhanda Karnataka Rajya Raita Sangha, a farmers’ association. “And because we did not see any rainfall, we did not plant crops for the next season [June and July, 2019].”

In Tamil Nadu’s Kaveri basin areas, since the state receives its rainfall largely between October and December, it is too early to make an assessment, Muddu said. Though the current soil moisture maps show low moisture content over the Kaveri basin in Tamil Nadu, this may not signify an impending drought or poor yield because the state’s agriculture banks largely on the October-December rainfall, he explained.

The heavy August rainfall caused flooding in certain farmlands and many farmers also lost their homes, Shantakumar said. Around 76 people died in Karnataka in these floods, according to latest reports.

While the heavy downpour during August filled many reservoirs to capacity, it did not alleviate the groundwater stress caused by deficient rainfall in the two preceding months.

“Climate change, along with loss of vegetational cover, is causing flash floods and this is preventing rainwater from seeping into the ground,” said T V Ramachandra, coordinator for the Energy and Wetlands Research Group, IISc. “For any catchment to retain water, green cover is needed.”

Vegetation, especially that comprising native species, allows water to percolate. “And this is how groundwater gets recharged,” Ramachandra explained. “So, when the monsoons recede, the water stored in these underground layers will flow into rivers and streams and this is how we get water throughout the year.”

Vegetational cover across the basin had declined over the last few decades, Ramachandra added. “The green cover over the Kaveri basin was 20% in 1965. Today it is around 13%,” he said. The Kaveri basin had 35,020 sq km of dense vegetation cover in 1965. This stood reduced to 22,747.17 sq km as of 2016, according to the analysis conducted by Ramachandra and his team. 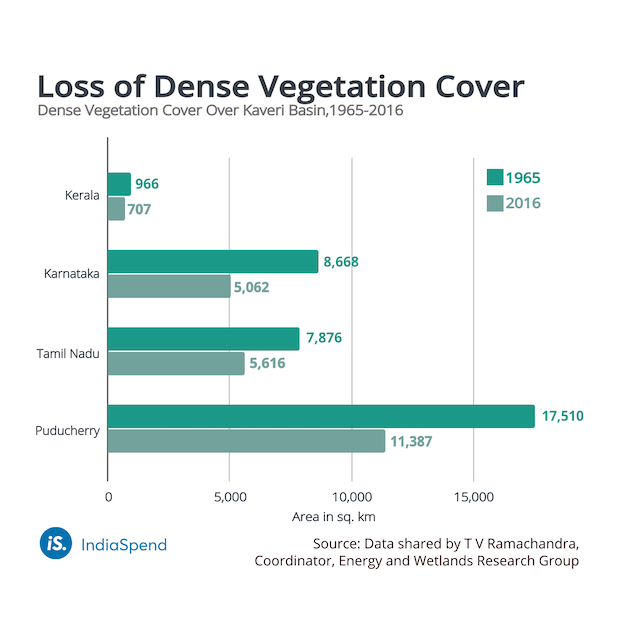 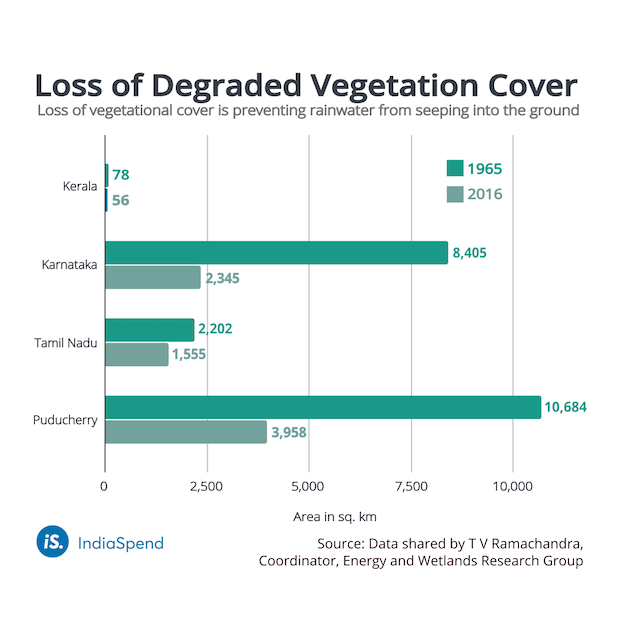 “Catchment integrity is crucial in managing a river basin,” Ramachandra said. “Firstly, we need to maintain green cover--with native species--over catchment areas. Secondly, there is water mismanagement because of inappropriate cropping patterns--the growing of sugarcane over dry areas that could previously only support the production of millets, pulses and groundnuts.”

“Climate change is aggravating the problems that are caused by these factors,” Ramachandra said.

(Pardikar is an independent journalist based in Bengaluru.)