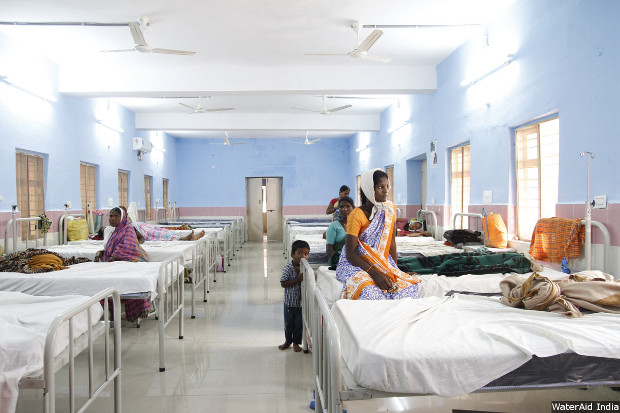 It ranks number six in per capita income--although it has slipped from number three--but the relatively prosperous, mountainous state of Uttarakhand does worse than many poorer states with its infant mortality rate (IMR), ranking 18, an indication of its indifferent health as it prepares to choose a new government on February 15, 2017, according to an Observer Research Foundation analysis.

Although the maternal mortality ratio has improved, child-health indicators, collectively, a major bellwether of a state’s healthcare system, do not match Uttarakhand’s relative prosperity:

IMR per 1,000 live births. Click on districts for data.

With health increasingly important to economic progress, this is the fifth of a six-part series that uses the latest available data to discuss the state of health and nutrition in Uttar Pradesh, Manipur, Goa, Punjab and Uttarakhand.

With 10 million people--or less than half as many as Delhi with an area 36 times as large--Uttarakhand clearly struggles to offer adequate healthcare and get doctors and other medical professionals to many far-flung villages, a situation the government acknowledges.

Community Health Centres (CHCs)--the second-rung of the public health system--are 83% short of specialists required to handle emergencies and 50% short of nursing staff. No more than 68% of primary health centres (PHCs), the frontline of the basic healthcare system, work as they are supposed to 24x7, according to data, the latest available, from the District Level Household and Facility Survey (DLHS-4).

Why are babies dying in holy Haridwar at the same rate as The Congo?

The IMR of rural areas around Haridwar--the city is Uttarakhand's second largest--is 70 (2012-13), worse than the average for India’s worst statewide IMR of (68) among Empowered Action Group (EAG) of states–India’s most backward–recorded in 2012-13 from Uttar Pradesh. Rural Haridwar's IMR is also worse than many of the poorest African nations and the same as the Democratic Republic of Congo, home to the deadliest conflict since World War II.

Uttarakhand doubled the number of institutional births 69% in the decade ending 2015-16, with about two-thirds in public health facilities. But private healthcare varies across districts, according to 2012-13 data, the latest available, from the Annual Health Survey (AHS) 2012-13 report reveals that there are significant variations in the presence of private sector across.

Haridwar is the only district where fewer babies are delivered by public healthcare than private. There is scarce private healthcare in the hills, where IMR rates are lowest across Uttarakhand. The hill districts of Rudraprayag, Pithoragarh and Almora have the fewest recorded deaths of infants, although healthcare is hard to reach, public or private. They still do better than districts with better access to private healthcare.

According to the Clinical, Anthropometric and Biochemical Survey-2014, Haridwar’s high IMR also appears to be associated with its stunting rate of 52% in children under five--comparable to IMR of 23 in Pithoragarh with lowest proportion (22%) of children under five stunted.

For a relatively rich state, Uttarakhand is slow in improving child health

Haridwar may be an outlier, but Uttarakhand, in general, has experienced slow reductions in child undernutrition, as indicated in the two National Family Health Surveys set 10 years apart.

According to the National Family Health Survey-2015-16, a third of children under five are stunted, with this rate--comparable to some poorer states, such as Assam (36%) and Chhattisgarh (38%)--varying widely across districts, from 52% in Haridwar to 22% in mountainous Pithoragarh as per Clinical Anthropometric and Bio-chemical survey-2014, where only 4% of babies are delivered at public healthcare facilities given by Annual Health Survey 2012-13.

The fact that a quarter of newborn babies are underweight reflects long-term malnutrition among females (aged 18-59) measured as BMI less than 18.5. It is also reasonably clear that mothers and their children in Uttarakhand do not receive the medical attention they require from the public healthcare system.

Only one of every 10 pregnant women receives complete antenatal care: At least four antenatal-care visits; at least one tetanus toxoid (TT) injection and iron-folic-acid tablets or syrup for 100 or more days, according to NFHS-4 data. Six of every 10 children (12-23 months) is fully immunised, but this proportion has remained stagnant in the decade to 2015-16.

Uttarakhand, however, shows improvement in ensuring legal age at marriage for women is observed. The proportion of women aged 20-24 married before the legal age of marriage (18) declined over a decade, from 23% to 14% in 2015-16, according to NFHS-4 data.

Early marriage followed by early pregnancy is a major cause of poor maternal and child health in India. Uttarakhand has made reasonable progress on this score, as women aged 15-19 either pregnant or with a live birth at the time of the survey has halved between 2005 and 2015. This means that even if married early, fewer women were bearing children before age 19.

What could quality healthcare do?

More widespread information-technology infrastructure for healthcare and more blood banks are some of the recommendations of this 2015 report of the Ministry of Health and Family Welfare. These and other public healthcare inadequacies have resulted in an average out of pocket expenditure of Rs. 2,399 per delivery at largely free public-health facilities in Uttarakhand.

Uttarakhand does need to allocate more money to healthcare. So far, its special-category status--meaning devolution of more central assistance in development--has helped secure greater central funding, but with changing centre-state finances, the state will need to find innovative and cost-effective public-health financing.

(Rudra is an associate fellow at Observer Research Foundation.)