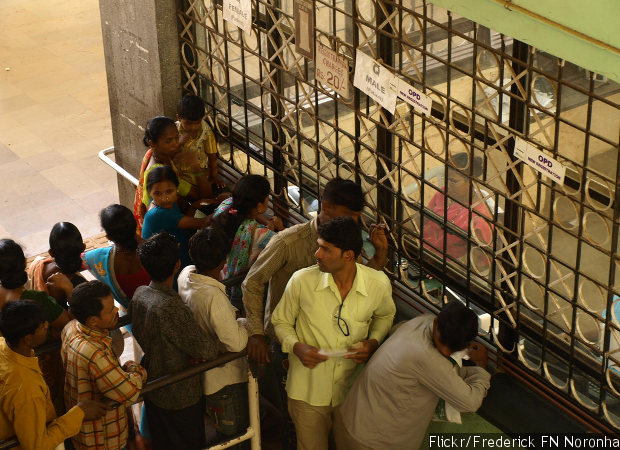 Patients queue up at the registration desk of the out-patient department at the Goa Medical College & Hospital. In Goa, over a decade, more women are anaemic, more children wasted, and in many urban areas, the sex ratio is now among India’s worst.

When it comes to the health of its 1.5 million people, sunny, sylvan Goa--India’s smallest state by area and the fourth-least populous--does better than most Indian states and best among the five heading into elections, according to an analysis by the Observer Research Foundation.

With health increasingly important to economic progress, this is the fourth of a six-part series that uses the latest available data to discuss the state of health and nutrition in Uttar Pradesh, Manipur, Goa, Punjab and Uttarakhand.

Goa has a lot going for it: It is India’s fifth-most literate state (93% men, 82% women are literate) according to 2011 Census; 94% of women in the state participate in household decisions, according to National Family Health Survey, 2015-16 (NFHS-4) data; 99.5% of births take place in a hospital as against all-India average of 79%, according to Rapid Survey on Children 2013-14 data; public-health expenditure is four times the Indian average; medical facilities abound, and they have no shortage of health professionals; the sex ratio is among India’s best and getting better; and the infant mortality rate is India’s best, the same as Saudi Arabia and better than Brazil.

Yet, as we parsed these data, we found prosperity has brought new worries:

As we delved into the details, some answers emerged.

The government is spending money, but so are citizens

Public health expenditure in Goa, at Rs 2,439 per capita, is almost four times the national average, five times that of Uttar Pradesh and twice that of Uttarakhand, according to a health and family welfare ministry report.

Since the public per capita expenditure on health is quite high, health infrastructure at PHCs and CHCs in Goa appears to be better than most states: 94% of Goan villages surveyed had a SHC within 3 km and 82% had a PHC within 10 km.

Apart from a surplus of nursing staff at these centres, no PHC was short of a doctor, lab technician or pharmacist, according to the Rural Health Statistics 2016.

There is, however, a shortfall of specialists--surgeons, obstetricians, gynaecologists, physicians & paediatricians--at the CHCs. This is why Goans may be flocking to private healthcare facilities, despite the high premia they charge.

So, Goans flock to private healthcare, borrowing or dipping into savings

Roughly 45% and 60% of hospitalisation cases in urban and rural Goa, respectively, use public healthcare and is generally free. However, using private healthcare, which is largely paid for with household savings or loans, drives up private health expenditure.

While 16% of Goan households have at least one member covered by a health scheme or health insurance, according to NFHS-4 data released in 2016, there is a difference of almost 14 percentage points in insurance coverage between the two districts in Goa.

The average treatment cost per person for an ailing Goan was roughly Rs 50 over/under the Indian average, for both rural and urban India. However, in rural Goa, the average total medical expenditure (TME) per ailing person for an acute illness was 17 times the average expenditure at a public hospital; in urban Goa, it was four times higher. This reflects the premium Goans pay to private hospitals, even for acute “non-hospitalised treatment”--meaning, treatment for illnesses or ailments which did not require admission of patients into hospitals as in-patients--in the private sector.

This affinity for private healthcare begins when a baby is born.

The high costs of having a baby: The Caesarean explanation

Caesarean births increased by 22% in Goa over the last decade, according to NFHS-4 data, the latest available. About 40% of institutional births take place in the private sector, but of those 40%, around half are caesarean births. While public-sector caesarean deliveries are lower (19%), this is still higher than the ideal rate for these types of deliveries, which should be between 10% and 15%--beyond which there is no evidence of gains in mortality rates--according to this World Health Organization statement.

In urban North Goa, 62% of all births in private-sector healthcare institutions were delivered by a caesarean section, while the comparable figure for urban South Goa was 54%.

Births By Caesarean Section In Goa

These deliveries involve anaesthesia, the use of an operation theatre, a surgeon, and a longer hospital stay, at the least, driving up costs. In the short term, there is a link, some studies suggest, that caesarean sections performed without medical indications increased adverse maternal outcomes.

Adverse maternal and child outcomes, not necessarily linked to cesarean sections, are evident.

Goa’s sex-ratio anomaly, underage marriages and children who waste away

In terms of mortality, Goa has one of the best estimates for infant mortality ratio, according to NFHS-4 data--13 infant deaths for every 1,000 live births (the same as much richer Saudi Arabia)--but its nutrition indicators do not always reflect that position.

While the percentage of children under five who were wasted--low weight for height--children in rural Goa fell from 17% to 12% in the last decade, in urban Goa, that proportion more than doubled since 2005. Urban south Goa has five times the percentage of wasted children than rural North Goa.

The trend of rise in wasting was seen at the all-India level as well, between the previous two NFHS surveys: NFHS II (1998-99) and III (2005-06). However, over the same period, the percentage of wasted children in Goa rose by less than the all India increase.

The percentage of underweight children in Goa fell by one percentage point over 10 years to 2015. While it is possible that the fall is due to an averaging effect of the simultaneous rise and fall in percentage of wasted and stunted children in Goa, the cause for the rise in wasting is unclear--considering Goa’s low infant mortality, high proportion of improved sanitation facilities (78%), and 88% immunisation coverage

Could Goa’s nutritional indicators be reflective of growing morbidity in Goa? In developing countries, there is a tendency for countries that have low IMRs to experience an increase in morbidity, as sick children who would have previously succumbed to illnesses, such as diarrhoea and malaria, survive but with low levels of nutrition.

However, the fall in Goa’s IMR since 2005 has been marginal, at best. Over 10 years, the IMR fell from 15 to 13 infant deaths per 1,000 live births, not a drop large enough to account for the state’s 57-percentage-point rise in wasting.

A related issue is that almost half of Goan children under the age of five are anaemic. However, for all states that have experienced a reduction in wasting, apart from Manipur, the proportion of anaemic children is equal to or more than that of Goa’s.

An alternate explanation could lie in the possible worsening of mothers’ health in Goa. However, the numbers tell us quite the opposite: The proportion of pregnant women who are anaemic fell by approximately 10 percentage points between 2005 and 2015, settling at 32% in 2015, according to NFHS-4 data. While wasting was worse for urban Goa, the drop in the prevalence of anaemia among pregnant women was more pronounced in urban Goa than rural. The proportion of women with below-normal body mass (BMI) index has also fallen in rural and urban Goa since 2005.

Antenatal care (ANC) in Goa similarly varies: The proportion of women who received full ANC in south Goa was less than half that of north Goa.

Goa’s healthcare issues are also compounded by diseases related to its prosperity, the so-called lifestyle diseases.

Lifestyle diseases: The burden of prosperity

In 2015, India signed a United Nations agreement that called for 17 sustainable development goals (SDGs). SDG Indicator 3.4.1 calls for monitoring of mortality rates attributed to lifestyle diseases--brought about by prosperity and the sedentary living--such as cardiovascular disease, cancer and diabetes.

That burden of prosperity is evident in Goa. Even as 33% of children in south Goa are wasted, 33% women in south Goa are overweight or obese with a BMI over 25 kg/m2, while the normal BMI is supposed to be between 18.5-24.9 kg/m2. Urban north Goa has the largest proportion of overweight or obese men and women in Goa, at 36% and 39% of the population, respectively. Between 2005 and 2015, the proportion of overweight/obese men in Goa more than doubled.

This is the fourth of a six-part series. You can read the first part here, the second part here and the third part here.

Next: Uttarakhand Has Rich People--And Children With Poor Health

(Colaco is a researcher at the Observer Research Foundation, focusing on health and nutrition.)