#Elections2017: More Wasted Children, Anaemic Men, Women Than Before In Once Robust Punjab 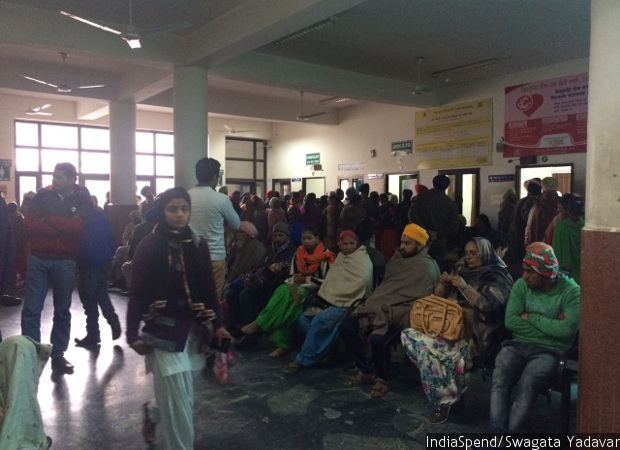 Patients queue up outside the out-patient department at the Civil Hospital in Tarn Taran, 25 km south of Amritsar. Punjab's government hospitals offer only as many beds as poorer states and absenteeism among staff is high, driving its citizens to private healthcare.

The popular caricature of Punjabis is of a robust, relatively rich people made that way by hearty eating and energetic living. The reality today: Wasting (low weight-for-height) among children has increased from 9.2% in 2005 to 15.6% in 2015, and one in four is still stunted (low height for age), according to an analysis of the latest government data, by the Observer Research Foundation.

As Punjab, once among India’s fastest-growing and richest states, prepares for assembly elections, it is now often termed as a “once rich” agrarian state, its economy declining and ill-health plaguing people of all ages.

With health increasingly important to economic progress, this is the third of a six-part series that uses the latest available data to discuss the state of health and nutrition in Punjab, Uttar Pradesh, Goa, Manipur and Uttarakhand.

Punjab faces a double burden of obesity and poor nutrition. Obesity among men (27.8%) and women (31.3%) increased by 5.6 and 1.4 percentage points, respectively, in the decade to 2015, putting more Punjabis than ever at risk of different non-communicable diseases, a situation--as we shall see--the state’s healthcare system appears unprepared to deal with. Simultaneously, the proportion of anaemic men doubled between 2005 (13.6%) and 2015 (25.9%), and anaemic women went up from 38% to 53.5%.

Overall, despite low public-health spending, many health and nutrition indicators have slowly improved over the last ten years in Punjab.

Punjab had--and has--much going for it, but it does not show in its health

Punjab is ranked 16 by population among Indian states but 15 by Net State Domestic Product (NSDP) per capita, according to NITI Aayog. Research studies have shown that, historically, free rural electricity linked to the green revolution has not only led to overexploitation of groundwater, but also a fiscal crunch. This has affected public spending on education and health, and there has been little real growth in Punjab’s social spending.

Yet, the health indicators lag its economic standing and there are wide inequities within the state, with under-provisioning and over-provisioning existing in parallel, driven by a costly, unregulated healthcare sector.

Among the battleground states of the 2017 elections, Punjab has the second lowest per capita public health spending at Rs 647 per year, according to the 2013-14 data from the health ministry, the latest available. That has led to infrastructure gaps: For instance, the average population size served by each government-run hospital bed is 2,420 in Punjab, comparable to poorer states such as Odisha, Madhya Pradesh and Assam.

Vacancies and absenteeism at Punjab’s public-health facilities make it difficult to improve health status through publicly provided healthcare, according to this 2014 Princeton University study. As a result, dependence on private healthcare facilities is high--83% for outpatient and 66% for inpatient--leading to Punjab having the highest average medical expenditure per episode of hospital admission in India.

Punjab also has among the lowest proportions of population covered by health insurance--5.6%, compared to the all-India average of 15.2%. Among India’s larger states, Punjab had the second-highest proportion of households (18.5%) that reported “catastrophic” healthcare expenditure, after Kerala, according to research from Brookings India, a think tank, based on the latest National Sample Survey Office (NSSO) data.

Often, patients from Punjab travel to neighbouring states seeking medical care. The average expenditure per overnight trip for health and medical purposes was the highest in Punjab among all Indian states and union territories--at Rs 31,512, Punjab’s average was about double the India average of Rs 15,336, according to the 2016 NSSO report, Key Indicators of Domestic Tourism in India.

The majority of Punjab’s health institutions (55%) are located in seven (Ludhiana, Gurdaspur, Jalandhar, Amritsar, Hoshiarpur, Firozpur and Patiala) of its 22 districts, according to this 2014 study.

Media coverage of Punjab’s healthcare sector often features the “cancer train”, which carries cancer patients to Rajasthan’s Bikaner from Punjab’s cotton belt. Pushed out by the high costs, and making use of a railway concession for cancer patients and carers, many poor Punjabis travel to Rajasthan regularly for their cancer treatment.

The proportion of rural households in Punjab with any member covered by health insurance or health scheme is 22.1%, compared to Manipur’s 3.7%, Goa’s 11.4%, or Uttarakhand’s 19.8%, according to NFHS 4, the latest available data, released in 2016. However, district-level disparities in insurance coverage remain: From districts like Patiala, where only 10.5% households are covered by health insurance, to Rupnagar where 45.4% households are covered.

Urban sex ratio at birth for under-five children varies from 1,147 in Bathinda district--better than the average for Kerala and Puducherry, regions with India’s best sex ratios--to 593 in Amritsar district, among the lowest in India.

Sex Ratio At Birth, By District

Over the last decade, the proportion of fully immunised children has improved in Punjab--from 60.1% to 89.1%, according to NFHS 4. Yet, district-level inequities remain: Full immunisation coverage in Punjab’s districts varies from 72.3% in Ludhiana to 100% in Kapurthala.

Safe deliveries or births assisted by a doctor/nurse/lady health visitor/auxiliary nurse midwife/other health personnel, either at home or hospital, have also increased over the last decade, from 68.2% in 2005 to 94.1% in 2015. Almost 99% of deliveries in Barnala and Faridkot districts are safe; in others, such as Ludhiana and SAS Nagar, one in 10 is still without the assistance of health workers.

A relook at health and nutrition strategies may be necessary in Punjab, given the double burdens of under- and over-nutrition as well as communicable and non-communicable diseases. As of now, Punjab’s health system seems ill-equipped to face new challenges. The state elections give political parties an opportunity to share with voters their vision and plan for a healthy Punjab.

This is the third of a six-part series. You can read the first part here, and the second part here.