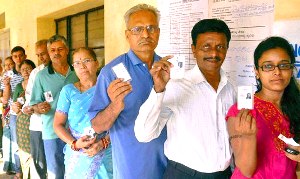 Much emphasis has been placed on the potentially higher turnout at the polling booths in the upcoming elections, starting April 7, 2014. The question is: do high turnout numbers really matter and will they swing the vote this time?

Another surprise in the voting pattern during the 2009 elections was the North East and South India. Nagaland had the highest voter turnout across the country at 89.99% followed by Tripura (84.45%) and Sikkim (83.76%). The states accounted for a very small number of seats though.

Let us now compare the voter turnout and the results in these states:

If you look at the 2009 election data, the Congress has been able to win the majority of the seats in alliance with state parties like its erstwhile partners Dravida Munnetra Kazhagam (DMK) in Tamil Nadu and the All India Trinamool Congress (AITMC) in West Bengal.

Its performance was boosted by its alliance with Samajwadi Party in Uttar Pradesh. Its alliance with National Congress Party (NCP) in Maharashtra also helped INC win more than 50% seats in the state.

The low voting percentage was seen in the 2004 elections too. As against the national average of 58.01%, U.P. saw polling of only 48% and Maharashtra had a participation of only 54%.

The first real challenge to the ruling Government in India happened in 1977. With a voter turnout of only 60.49%, the ruling Congress party was routed with 154 seats while the opposition Bharatiya Lok Dal (BLD) won 295 seats.

During the 7th Lok Sabha elections held in 1980 after the fall of the first non-Congress Government at the centre, the voting percentage was only 56.92%. But the opposition at that time (Congress) swept the polls with 353 seats.

The next challenging election was in 1984 following the assassination of Prime Minister Indira Gandhi in 1984. With a voter turnout of 63.56%, the ruling Congress won a landslide victory with 404 seats.

With no clear issues looming on the horizon, the electoral scene seems set for a close finish between the Congress and the BJP. And if a game driven by allies were to play out, and chances are they will, electoral fortunes will clearly be driven by pre- or post-electoral deals and alliances between parties. The real story may thus emerge not on counting day on May 16 but well after that.