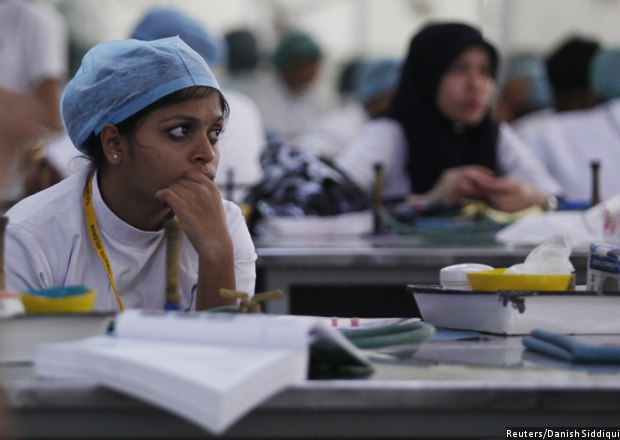 Young graduate mothers gave birth to 899 girls per 1,000 boys, lower than the national average of 943, according to an IndiaSpend analysis of Census data.

Higher education levels have helped in better family planning, but they do not eliminate the preference for boys, the analysis reveals.

The reason, experts said, could be that the educated are more likely to afford sex-selective abortions to kill chances of giving birth to girls.

Sex-selective abortion was outlawed by India in 1994.

The Census 2011 data for fertility of women based on education levels also show that educated mothers gave birth to fewer children, IndiaSpend reported.

Urbanisation and better education appear to correlate with a worsening sex ratio (number of females per 1,000 males). The sex ratio of children ever-born (that is, including children who died at birth or later) to all women was 895 in rural areas but 878 in urban areas.

(1) These data are for all children ever born to these women, and include children who died at birth or later.

(2) This graph presents data only for mothers who were between 20 and 34 years old at the time of census, as it gives a more contemporary trend.

(3) The age group "All ages" in the census data includes "age not stated", and hence, the above numbers may not capture each and every woman between 20 and 34 years old.

Preference for sons is no lesser among the educated, according to Tulsi Patel, Delhi University professor and editor of the 2007 book Sex-selective Abortion in India.

"With better control over fertility and reproductive outcomes, also comes the conviction of dispensability of daughters," she said.

The one positive trend is that younger women (between the ages of 20 and 34) reported a better sex ratio than women in older age groups. Mothers between 20 and 34 gave birth to 927 girls per 1,000 boys, whereas the average for all women was 890.

This indicates that although younger mothers are less likely to prefer male children than before, education and urbanisation do not appear to be helping.

"Discrimination against girls, selective female feticide, and low sex ratio are more common among the educated and the prosperous part of the society throughout India," said this study by two Leiden University researchers Kamlesh Madan and Martijn Breuning.

The study also noted that when abortion was legalised in 1971, it was "used extensively in urban areas for sex-selective abortions".

Also, the equipment, being expensive, was "available mostly to the affluent and the well-informed part of the population in the cities".

The trend, it seems, has not changed even today with lesser costs and higher incomes.

Another 2011 study, published in The Lancet, pointed out that there was decline in sex ratio for a second-born child if the first-born was a girl. "Declines were much greater in mothers with 10 or more years of education than in mothers with no education, and in wealthier households compared with poorer households."

"Selective abortion of girls, especially for pregnancies after a first-born girl, has increased substantially in India," the study concluded.

While the sex ratio dipped for more educated mothers across India, the opposite was observed in Kerala, the state with the best sex ratio (1,084).