Dalit activists protest at Thane railway station in Mumbai on January 3, 2018. Dalits, educated and aware, are now responding to the antagonism of dominant castes and the collateral damage caused by the rise of Hindutva forces and their “programmes” like cow protection, French academic Christophe Jaffrelot told us.

On January 1, 2018, dalits, the most disadvantaged community at the bottom of the Hindu caste ladder, had gathered in large numbers at Bhima Koregaon, a village in Pune, to mark a historical event. Two hundred years ago, Mahars, a dalit sub-group, had helped the British defeat the forces of the Brahminical Peshwa dynasty at the site.

The dalits at the event were attacked by right wing groups who claimed to be furious at a celebration of British victory. What followed the next day was a strong retaliation by dalit groups protesting the attacks that brought Mumbai, India’s financial capital, to a halt.

This was the third such occasion in two years when it became clear the dalits could respond strongly to upper caste atrocities. Two years ago, in January 2016, there had been spurt of nationwide student agitations against the suicide of dalit Hyderabad student Rohith Vemula. Then, in July 2016, there were violent protests against the public flogging of dalits in Una by cow vigilantes.

This rise in dalit assertiveness is buoyed by rising levels of education and employment. There has been an overall increase of 51% in the number of literate persons among scheduled castes, IndiaSpend had reported on December 13, 2013. In urban areas, the number of literates among SCs increased by 62%. The worker participation rate for SCs is above the national average (39.8%) at 40%.

Dalit converts to Buddhism--also called neo-Buddhists--enjoy better literacy rates, greater work participation and sex ratios than scheduled caste Hindus, the group from which most converts emerge, according to an IndiaSpend analysis of 2011 Census data.

French scholar and columnist Christophe Jaffrelot, 53, has been studying the dalit and muslim communities in India and their marginalisation for three decades now. Currently a senior research fellow at CERI-Sciences Po/CNRS in Paris, Jaffrelot became interested in Indic philosophies when he was 18 and ended up doing his PhD on the Rashtriya Swayamsevak Sangh (RSS) and the Sangh Parivar. 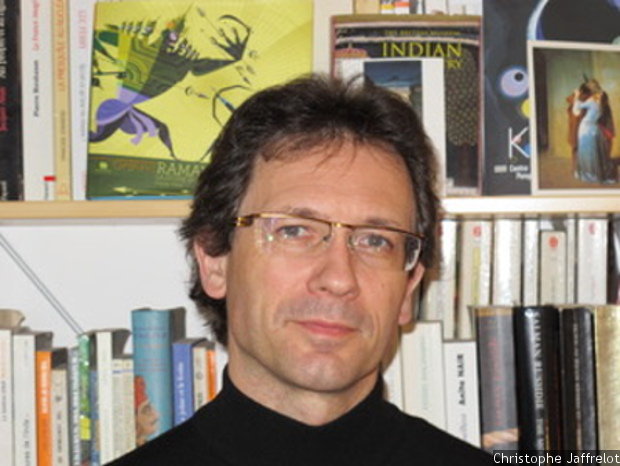 French scholar and columnist Christophe Jaffrelot, 53, has been studying the dalit and muslim communities in India and their marginalisation for three decades now.

His first book on right wing politics was The Hindu Nationalist Movement and Indian Politics: 1925 to the 1990s. Jaffrelot has also written extensively on OBC [other backward classes] politics and Indian muslims, who he terms as the “new dalits”, comparing the ghettoisation of the two communities. The place of Islam in Pakistan’s politics is the subject of his last book, The Pakistan Paradox.

In India recently for the launch of an anthology, Dr Ambedkar and Democracy, and a co-edited volume, The Islamic Connections, he spoke to IndiaSpend on the recent phase of dalit mobilisation, why it is exceptional and why right-wing politics will always have limited appeal for backward castes.

After the suicide of Rohith Vemula, there has been a marked resurgence of dalit assertiveness and mobilisation. What do you see different this time? Do you see this as a stronger movement than before?

Dalit mobilisation has been experienced in several cycles in India’s modern history, not only in terms of demonstrations in the street since Ambedkar’s Mahad satyagraha in 1927, but also in electoral terms. In 1962 and 1967, the Republican Party of India was very successful in Uttar Pradesh. The current resurgence of dalit assertiveness is remarkable because it develops simultaneously in several states--not only UP and Maharashtra, but also Gujarat. Long-term and short-term factors explain this state of things. After several decades of reservation policy, dalits are getting some education and with it comes a new awareness of one’s rights. Circumstances explain their mobilisation too: First, dalits are facing dominant castes’ antagonistic attitude, like the questioning of the 1989 Anti-Atrocities Act by the Marathas; second, they are collateral victims of the rise of Hindutva forces and some of their “programmes”, including cow protection, as evident from what happened in Una in Gujarat.

Dalit leadership appears to now be in the hands of the young--Chandrashekhar Azad of Bhim Army and Jignesh Mevani, for example. The older names in the movement, particularly Mayawati, appear to have lost their shine and strength. Why is this? What marks the younger leaders apart from the earlier generation of Dalit leaders?

This perception is partly true, partly due to the media which tend to focus on personalities of their liking. The remarkable young leaders you are mentioning have not replaced older ones, simply because they do not have large organisations behind them. It takes time to build an organisation. The Bahujan Samaj Party (BSP) is more than 30 years old and shows a remarkable resilience, in spite of lack of funds. After all, it got 20% of the votes in the UP elections last year. In Gujarat, Mevani won his seat partly because the Congress did not nominate any candidate against him and the Congress jumped from two to seven SC seats, partly because of organisations like the Dalit Shakti Kendra that dalit leaders like Martin Macwan have built in the course of several decades. Journalists should pay more attention to this kind of groundwork, and investigate more about the circumstances in which dalit NGOs have been deprived of the FCRA.

In a recent article, after the Bhim Koregaon tensions in Pune, you said that caste identities and hostilities in many parts of the country--Tamil Nadu, Gujarat, Rajasthan, Maharashtra--are now almost entirely between dalits and dominant castes. In most cases, the upper castes are simply not a part of the dynamics. To what do you attribute this?

A definition of the dominant castes may be needed first: These castes are those which have land and numbers. They may belong to the Savarnas (like Rajputs in West UP); they may be Shudras with some of their sections classified as OBCs (like the Patels). These castes have one thing in common: They are still predominantly rural and their members which are engaged in agriculture are experiencing socio-economic challenges, because of the agricultural crisis and because of their comparatively low rate of education resulting in joblessness. They feel under pressure from the OBCs and the dalits who are benefiting from reservations in the university and job quotas. Dominant castes resent competition from the SCs not only for socio-economic reasons, but also because of their attachment to their status. That said, the dalits are not catching up yet, far from it, and they definitely need state’s protection (in terms of physical safety too).

In an ongoing investigation into caste violence, IndiaSpend has found that there has been a sharp rise in crimes against dalits. This could be higher reporting but the acquittals are high as well. Do you believe there is a sense of impunity about caste crimes today, the sense that the establishment doesn't care?

This is not only true of crimes against dalits, a similar problem arises in the case of Muslims, as evident from the limited number of criminals responsible of lynching who have been prosecuted. Many variables need to be factored in to make sense of this state of things: The police bias, the slow pace of the judiciary and, even more importantly, the fact that testimonies are not easy to gather publicly.

The Sangh is seen as being largely upper caste and anti-dalit but the BJP has managed to win dalit votes in UP, wresting them from the BSP. Do you think this is an isolated alignment or could it replicate elsewhere as well?

Some dalits have always voted for the BJP, in UP or elsewhere for all kinds of reasons: First, the demonstration effect (that you can call sanskritisation, to use MN Srinivas’ phrase) that harks back to the Shuddhi movement of the 19th and 20th century when Hindu Mahasabha leaders agreed to have food with Dalits. Second, clientelism, a process through which some dalits support BJP notables who help them economically or otherwise. Thirdly, a combination of inter-caste rivalries and factionalism: If one jati supports a dalit party, another one will turn to another one. In UP, the Valmikis (rechristened in a sanskritisation process cultivated by the Vishva Hindu Parishad) have voted for the BJP in response to the association of the Jatavs with BSP. In Maharashtra, Mahars have supported the RPI and the Mangs as well the Chambhars other parties, including Shiv Sena and BJP. That said, the dalits have not been attracted by BJP in large numbers. Only one-fifth of them supported BJP in 2014, and in their midst we do not observe the rule that applies to other caste groups, that is "the richer I am, the more BJP-oriented I am too".

Why do you believe that the early socialist dream of a casteless society fell by the wayside? Do you see caste becoming irrelevant anytime soon in India?

Caste is transforming itself to some extent. The stigma of impurity remains strong in some milieus, especially in villages, but it does not prevent people from traveling in the same bus any more. But caste sentiments are perpetuated by endogamy: Most Indians continue to marry within their caste. And this matrimonial practice reflects a strong sense of caste identity that is nurtured by attitude vis-à-vis food, vis-à-vis history (see the Rajputs' pride of their history). In some ways, castes have become a pressure groups, as evident from the way some of them have lobbied for reservations. But in some other ways, they have become mini nations with a strong sense of their kinship and culture. The proponents of Hindu nationalism have not transcended caste differences in spite of their efforts to promote a unifying sense of belonging. The socio-economic differentiation of castes along class lines may be the ultimate antidote to casteism if, after the urbanisation and industrialisation process is completed, there is too little left in common between the rich and the poor of the same caste. This became clear in the visible urban/rural divide between how the Patels voted in the recent Gujarat elections.

Every political party, including the BJP of late, has been keen to appropriate Ambedkar. Why hasn’t this resulted in a better life for the dalits?

The BJP co-opted him only because it became difficult to ignore the dalits as a vote-bank. But they found that he simply wouldn’t fit the Hindutva agenda. Ambedkar had left Hinduism because the caste hierarchy was so inherent in it that, according to him, it left no scope for change within the religion. And they also realised that the dalits who were voting for them weren’t doing it because they were talking about Ambedkar, whereas some of their supporters would be alienated by too many references to him. The Rajputs in UP were a case in point after they clashed with dalits in Saharanpur and elsewhere. So the BJP took to other routes, they talked of dalit entrepreneurs.

Dalit activists like Manoranjan Byapari have pointed out that those of the community who make their way up in life using education don’t always look out for those who are still marginalised. That education, which Ambedkar strongly recommended as a way out, isn’t the answer to dalit struggles.