Explained: Why Air Cooling Technologies Are Heating Up The Earth

Air conditioners and refrigerators use hydrofluorocarbons, which heat up the earth. Natural refrigerants, with lower warming potential, can replace them

Mumbai: Did you know that refrigeration and cooling technologies, such as air conditioners, add over 1 billion tonnes of carbon dioxide emissions (CO2), the same amount as Japan--the fifth largest emitter in the world, produced in 2018. India has formulated an India Cooling Action Plan (ICAP) for energy-efficient and climate-friendly cooling technologies, but in two years since its launch, progress has been slow, according to experts.

With heat waves sweeping across India, India's cooling demand is expected to grow five to eight times by 2037-38, as compared to 2017-18 levels, with the most growth in the demand for cooling spaces, which will be met through air conditioners.

In August 2021, India ratified the Kigali Amendment, which requires that countries replace earth warming hydrofluorocarbons (HFCs) with climate-friendlier coolants. If fully implemented, the HFC phaseout required by the Kigali Amendment would help avoid upto 0.4°C of global warming by the end of this century.

In this explainer, we look at the possible alternatives to HFCs and India's green cooling plan.

Cooling technologies such as air conditioners and refrigerators use hydrofluorocarbons or HFCs, which were commercialised in the 1990s as a replacement for earlier refrigerants that were based on chlorofluorocarbons, or CFCs. CFCs were destroying the ozone layer high in the earth's atmosphere, which is essential for protecting life from the sun's harmful ultraviolet radiation.

"HFCs are much less harmful than CFCs, but they create another problem--they have a strong heat-trapping effect that is contributing to global warming," said Shubhashis Dey, director of the climate policy programme at the Shakti Sustainable Energy Foundation.

HFCs are up to several thousand times more warming than carbon dioxide. These gases are not supposed to be emitted by AC units, but leakage often occurs during manufacturing, maintenance and breakdowns.

In 2050, HFC emissions are expected to contribute to warming that is equivalent to 20% of global CO2 output, according to a 2020 report by the Institute for Governance & Sustainable Development, a US-based environment organisation. 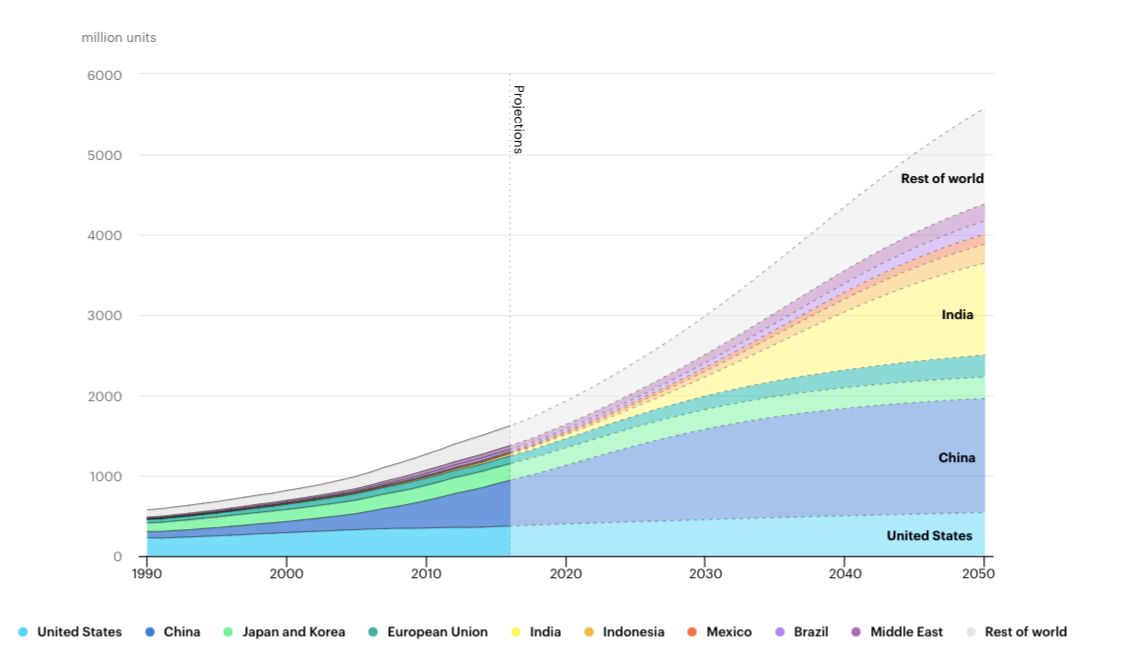 Here's how HFCs work: They circulate in the walls of the refrigerator, absorbing ambient heat to keep the fridge cool. As HFCs absorb the heat, it evaporates and the resulting vapor is pumped to the coils on the back of the refrigerator, where it is condensed back to a liquid under pressure. In the process, the heat absorbed from inside the fridge is released into the surrounding room.

Alternatives to HFCs such as hydrocarbons (HC), ammonia, water, etc. have lower global warming potential, studies show. And, CO2 itself, first used in refrigeration more than a century ago, is coming back in commercial refrigeration, as it is less warming than HFCs.

But there are issues with some natural refrigerants--some are flammable, Shikha Bhasin, senior programme lead at Delhi-based environment policy think-tank Council on Energy, Environment and Water, told IndiaSpend. "So there is big pushback from a lot of companies on moving towards natural refrigerants," impacting the market for these gases, she added.

Natural refrigerants, including ammonia, propane and CO2, have high risks; a propane leak could cause a fire while an ammonia leak could be fatal.

"Natural refrigerants' applicability, or use in cooling systems, needs to be tested to understand what the challenges are and what we can learn about using them safely and effectively," said Bhasin of CEEW.

In India, Godrej & Boyce is one company that has switched to non-HFC alternatives in their ACs and refrigerators. "For refrigerators, we switched from chlorofluorocarbons, or CFCs, to environmentally friendly hydrocarbon blend (which is a propane and isobutane mixture) as early as 2001," Kamal Nandi, business head and executive vice president of Godrej Appliances, told IndiaSpend. "The products require a certain technical expertise which we have built over time."

The initial switch to R-600 (isobutane) cost them Rs 36-40 crore, a sixth of which was funded by Swiss and German governments. In 2010-11, they moved their air conditioners to R-290 (propane), which cost them Rs 10 crore, completely funded by GIZ, the German international development agency.

"There are also other cooling options, which do not use any refrigerants and are climate-friendly," said Dey. These include simple, low-tech solutions, such as one in Rajasthan. A college building has been designed using ancient architecture--at the base of the building is a vast pool of water, a cooling concept taken directly from the stepwell structures developed locally over 1,500 years ago to provide refuge from the desert heat.

In India, roughly 8% of households were air-conditioned as of March 2018. This is estimated to rise to 50% by 2050, according to a report by the The Energy and Resources Institute. This would not only lead to an increase in HFCs leaking from AC units, but would also translate into a significant increase in energy needs.

"The challenge is not only to transition to clean technologies that have minimal impact on climate, but also to take efficiency into consideration, as this will create additional pressure on the [electricity] grid," said Dey.

Increasing the energy efficiency of air conditioners worldwide could save nearly $3 trillion in investment and running costs for power generation by 2050, according to a May 2018 International Energy Agency report.

In 2018, the Rocky Mountain Institute (RMI), a US-based energy policy think-tank, started a Global Cooling prize scheme to encourage companies to build a more efficient air conditioner, five times more efficient than the current standard, but at a cost no more than twice as much as it costs today. This prize is endorsed by the UN Environment Programme and the Indian government. Daikin Industries, one of the winners, produced cooling systems using HFOs.

In March 2019, the environment ministry launched the ICAP to address cooling requirements by prioritising energy-efficient and climate-friendly cooling technologies. The plan sought to reduce cooling demand across sectors by 20-25% by 2037-38, reducing refrigerant demand by 25-30%, through strategies such as the adoption of non-refrigerant cooling technologies.

The plan also recognises "cooling and related areas" as a thrust area of research under the national Skill and Training Programme, and thereby training over 100,000 service technicians by 2022-23 to meet the cooling demands.

India's nearly 200,000 AC service technicians in India, most of whom function in the informal sector, would have to be trained to transition to energy efficient cooling technologies, the cooling plan said. The number of people employed in this sector would also increase.

"The plan has short- and long-term interventions to reduce HFC usage," said Bhasin, who was one of the authors of the plan. "The implementation of ICAP was thwarted by the pandemic, but the intent is still there."

We reached out to the Ministry of Environment, Forest and Climate Change for their comments on the implementation of ICAP. We will update this story when we receive a response.

In short-term recommendations for the transition, the report suggested development of alternatives to HFCs with low global warming potential, building application laboratories to evaluate these alternatives and coming up with new solar energy-based cooling solutions, etc. These would need to be implemented between 2019 and 2024.

In recommendations for the medium term, the ICAP suggested setting up production facilities and undertaking toxicity tests for new-generation refrigerants, and in the long term, initiating commercial production of alternative refrigerants and building a review mechanism with incentives for corporates to undertake research on more such alternatives. This would have to take place between 2024 and 2029 and 2029-2038, respectively.

But "India's ratification will help advance the ICAP implementation", said Dey, referring to the ratification of the Kigali Amendment in August 2021. India has said it would develop a national strategy for phasing down HFCs in 2023, in consultation with industry. The government also plans to update its existing legal framework to phase out ozone-depleting substances by mid-2024, through the Ozone Depleting Substances (Regulation and Control) Rules. This will allow the government greater control on the production and consumption of HFCs to comply with the Kigali Amendment.

Flavia Lopes is an environment and climate change reporter.