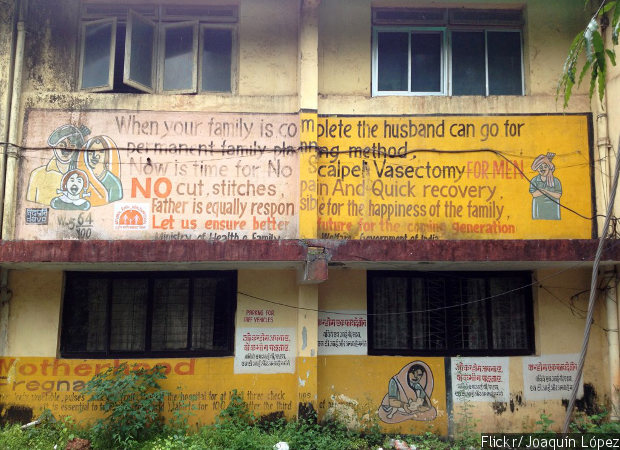 A building is painted with a family planning awareness message, issued by the ministry of health and family welfare, in Mapusa, Goa. Condom use in the country declined 52% over eight years and vasectomies fell 73%--indicating greater reluctance among men to use birth control.

Over eight years to 2016, as India’s population surged, the use of contraceptives declined almost 35%, as abortions and consumption of emergency pills--both with health hazards and side effects--doubled, according to health ministry data.

Despite a 14% percentage-point rise in national literacy over a decade to 2011, hazardous birth-control measures of the last resort, emergency birth-control medication and abortions, are becoming the first choice among both poorer and wealthier, better-educated Indians. The result is that India’s population, now estimated at 1.32 billion, is expected to surpass China’s within the next six years and reach 1.7 billion by 2050, according to World Health Organization projections, even as millions of women die from unsafe abortions.

While condom use declined 52% over eight years and vasectomies fell 73%--indicating greater reluctance among men to use birth control--the use of oral birth-control pills fell 30% between 2008 and 2016, the data showed.

Compared to 300,000 men who agreed to vasectomies in 2008-09, more than 5.5 million women agreed to use intrauterine contraceptive device (IUCDs) to avoid pregnancy the same year. Over the years, the number of women resorting to these devices has remained steady.

“People think that women should undergo everything,” said Nozer Sheriar, deputy secretary general of the Federation of Obstetric and Gynaecological Societies of India (FOGSI).

The government is trying to expand contraceptive choice and use, India’s health minister J P Nadda--referring to the forthcoming launch of controversial injectable contraceptives for women in the public health system--said in January 2017. Greater contraceptive use allows births to be spaced better and reduces the chances of accidental pregnancies and population rise.

In literate Kerala, condom use plunges; rises in Bihar

Does the use of conventional contraceptives correlate with literacy rate? That is not clear. Indeed, there is some evidence that the opposite is true.

For instance, Karnataka’s literacy rate (75.6%) is higher than than the national average of 74%, according to Census 2011. Yet the state is among the top five of those that reported the highest drop in vasectomies, IUCDs and oral-pill use.

For men, medical professionals recommend condoms and vasectomies--where the tubes that carry sperm are permanently blocked; and, for women, oral pills and IUCDs, which are inserted into the uterus and stop sperm from fertilising eggs.

While Indian men believe that condoms reduce sexual pleasure and vasectomies rob them of their manhood, women have concerns about the health impacts of IUCDs and oral pills, said Umesh Kulkarni, part of the training team of Ipas, an NGO that tries to prevent death and disability from unsafe abortions.

The drop in contraceptive use comes at a time when it is easier to limit family size.

Over a decade to 2016, in 10 of 14 states surveyed as part of the National Family Health Survey, 2015-16, use of any modern method of family planning among women of childbearing age (15 to 49) decreased 6%, despite a greater awareness of birth-control methods and an improvement in family planning services, IndiaSpend reported in August 2016.

So, why is contraceptive use falling? Kulkarni believes the government’s “force-feeding” approach could be responsible.

When doctors and teachers advocate these contraceptives, people tend to get sceptical, he said, since they wonder whether the process is indeed as safe and beneficial as a doctor or teacher claims or if they are hard-selling them because of the incentives.

The growing reluctance to undergo vasectomies could be an echo of the wariness created by the hardsell. While 290,000 Indian men chose this permanent contraceptive in 2008-09, the figure for 2015-16 was less than 80,000.

Andhra Pradesh and Bihar recorded a fall of 95% and 90%, respectively.

“Men take vasectomy as castration,” said FOGSI’s Sheriar, who argued that the public sector was “too aggressive and coercive” and the private sector “too casual”.

Information, education and communication about male sterilisation is inadequate, said experts, not only among Indian society at large but in the public-health system. The fall in use of condoms could reflect these inadequacies.

Condoms are a better option than other oral-contraceptive methods, but Indian men are not keen to use them.

Although 660 million condoms were distributed nationwide in 2008-09, that figure fell by more than half to 320 million in 2015-16. Andhra Pradesh and Madhya Pradesh recorded the highest falls, 83% and 79%, respectively.

Over the same eight-year period, the use of oral pills by women came down by 30%. Tamil Nadu and Kerala recorded the highest fall.

As contraceptive-usage declined, sales of emergency contraceptive pills that check pregnancies rose 100% over the eight years in question.

While a million emergency pills were sold nationwide in 2008-09, the figure rose to 2 million in 2015-16, according to data from the health ministry’s National Health Management System.

As the name suggests, the emergency contraceptive pill should only be used when conventional contraceptives fail or after an unexpected sexual encounter takes place. If used often, these pills can disrupt a woman's menstrual cycle, cause intermittent bleeding, and, possibly, infertility, said Ipas’ Kulkarni.

“Sometimes, an unplanned pregnancy can upset your whole life.”

Complete with dirge-like background music, these are the opening lines of an 2009 i-pill advertisement. It continues: “So, if you are worried that you might get pregnant after last night, get new i-pill, the emergency contraceptive pill.”

Ipas’ Kulkarni speculated that “inappropriate effects” of such advertisements are driving exponential growth in their sales, making what should be contraceptives of the last resort, the first choice. The side effects of emergency pills include nausea, weight gain, mood changes, missed periods, decreased libido and headaches and they are not recommended for routine contraception.

The sale of emergency pills rose significantly in Bihar (1,305%), Uttarakhand (724%) and Jharkhand (383%). In Tamil Nadu, where over-the-counter sales of these pills were banned in 2006 (they can be bought only with a doctor's prescription), consumption more than doubled over these eight years.

The marketing of contraceptives is instructive. Makers of these emergency pills reach their target audience through extensive advertising across print, online and television media. The government relies on word-of-mouth publicity to promote conventional contraceptives by roping in doctors, nurses and teachers of government hospitals and schools.

The inability of government advertising to communicate with its target audience was evident in conversations with contraceptive users.

Priya M (name changed on request), 52, a Kerala school teacher, had a copper T--an IUCD--inserted eight years ago. The mother of two told us she was always worried the metal device could fall out or perhaps slip inside. After four years, she asked a doctor to remove the IUCD.

Thomas Massey (name changed), 45, a businessman from Coimbatore in Tamil Nadu, said he has reservations about vasectomy, since it required surgery. “When there are i-pills, I don't think there is a need for another alternative,” he said.

When all else fails, Indians turn to abortions, in larger numbers than ever.

Abortions, its dangers and stigmas do not deter women

As many as 2,500 abortions were carried out in India every day in 2016, doubling from eight years ago, health data showed.

More than 10 million women are estimated to secretly undergo abortions every year, IndiaSpend reported in November 2016.

Compared with less than a million reported annual abortions, India logged sales of 11 million units of popular abortion medicines, mifepristone and misoprostol, according to this June 2016 report in Lancet, a global medical journal.

Women are often embarrassed to talk about abortions, experts said. In some women it evokes regret, while in others, pride.

“Every woman has a story to tell,” said the FOGSI’s Sheriar. “There isn’t a woman who does not have one, married or unmarried.”

He recalled women who consulted him without the consent of husbands or others in the family because they did not expect support. He talked of women who travelled long distances to undergo abortions.

Abortions were illegal until the Medical Termination of Pregnancy Act (MTP Act), 1971, kicked in. Yet, 46 years later, abortion is still considered taboo, rarely discussed but clearly used by women to end unwanted pregnancies.

A surging tide of women attempts abortions at home, goes to quacks

Up to 28% of Indian women report attempting self-abortions, according to this October 2006 study in the Lancet, and an Indian woman dies every two hours because of abortions gone wrong, The Hindu reported in May 2013.

Many young people are sexually active but unaware of precautions against pregnancy and risks of abortions, said Rekha G, manager at the Family Planning Association, a nonprofit, in Bengaluru. Quacks are often their choice for help with abortions. Wrongly done procedures by quacks were the third-leading cause of maternal deaths in India, Sheriar said.

Maharashtra--where use of condoms, oral pills and vasectomies fell by 38%, 22% and 61.5%, respectively, over eight years to 2016--was the state with the highest number of recorded abortions (1 million) over this period. Among poorer women, finding contraceptives is a problem, said Sheriar.

As many as 21% of Indian women who wanted to use contraceptives to delay or avoid pregnancy could not do so (technically called an “unmet need”), according to this 2015 study in the Indian Journal of Medical Research.

“We are a long way from where we need to be in terms of contraceptives coverage,” said Sheriar. “We have a massive unmet need for contraception.”

(Paul is a Bangalore-based independent journalist associated with 101reporters.com, a pan-India network of grassroot journalists.)