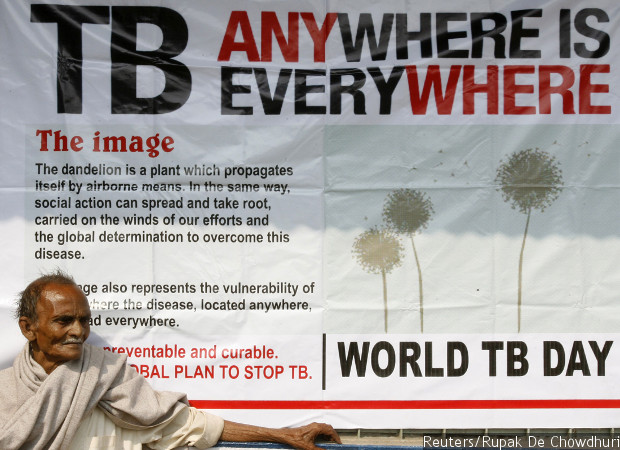 A radical draft National Strategic Plan (NSP) for Elimination of TB that proposes to bring down new tuberculosis (TB) infections by nearly 80% over the next eight years says India must expand the programme to the private sector, offer direct benefits transfer to patients, improve surveillance and monitoring of patients, and increase funding for the existing TB control programme.

“If the new NSP can be fully funded, and fully implemented, it could be a game changer for India,” said Madhukar Pai, associate director of the McGill International TB Centre at McGill University in Canada. “Even if elimination by 2025 is unlikely, the country will at least get closer to the End TB Strategy timeline of 2035.”

The World Health Organization’s (WHO) End TB strategy targets reducing new cases to under 10 persons per 100,000 a year.

At 2.8 million, India had 27% of the world’s new TB cases in 2015, according to WHO data. Tuberculosis is treatable, but the WHO estimates TB treatment does not reach 41% of India’s estimated patients, as IndiaSpend reported in October 2016.

India’s gains in TB treatment are by no means negligible--from 1997 to 2016, India’s TB control programme saved 7.75 million lives, directly and indirectly, through reduced transmission of TB, according to a February 2017 study.

However, “the rate of decline is too slow to meet the 2020 Sustainable Development Goals and 2035 End TB targets,” the NSP says, adding that prior efforts cannot be continued and a new strategy is needed.

“If resources do not follow the NSP, then I fear this will be yet another wasted opportunity to make real progress,” Pai said.

Source: Annual TB Report 2016, Draft National Strategic Plan for TB Elimination 2017-2025Note: In 2016-17, the figure for budget is not available and the figure for expenditure is upto January 2017

Further, even though the NSP targets an 80% reduction in new TB cases by 2025, it says early modelling exercises show that “increased coverage of care both in public and private sector will result in a decline by roughly half the TB incidence in the country over a decade”, which means the incidence would reduce to roughly 109 cases per 100,000 people by 2025.

The challenge: Barring some pilot projects over the last two years, RNTCP has solely focused on patients who come to the government system, even though the private sector in India treats an estimated 2.2 million TB cases.

“If we are talking about elimination, we can’t only talk about the public sector. Everyone who might have TB should be included,” especially as the private sector engages with half, if not more of TB patients, said Soumya Swaminathan, director general of the Indian Council for Medical Research (ICMR).

Solution proposed: The draft NSP proposes an expansion of the programme to reach every TB patient, wherever they seek care.

“The approach will be to first capture all TB patients by attracting TB notification from private providers and then work to improve the quality of care,” the NSP says.

The program plans to map all healthcare providers and pharmacists, and also provide free drugs and diagnostics to private-sector patients.

Even after these incentives, “the cost of involving the private sector is almost the same or marginally higher than the cost in the public sector”, according to the draft NSP.

Incentives count for a lot for smaller medical practitioners, for whom every patient is important financially, Swaminathan of ICMR said. “For larger practitioners and hospitals, making the system to report easier, while being strict about notifications, would help,” she said.

In the longer term, the draft NSP proposes a stricter regulation of notifications, with penalties for those who do not register TB cases with the government.

The challenge: India needs “an army” of people to engage with the private sector, trained to track, monitor and work with a variety of healthcare providers ranging from big hospitals to AYUSH (Ayurveda, Yoga and Naturopathy, Unani, Siddha) practitioners, Swaminathan said. This would require additional training and a larger workforce because health workers today are not equipped to work outside of the public sector, she explained.

Only 295 of the 764 positions of coordinator for private sector engagement have been filled, the draft NSP says, adding that not only do coordinators lack capacity, limited efforts have been made to build their capacity.

“Within the public sector, there is heavy dependence on an insensitive diagnostic test which cannot diagnose drug resistance,” the draft NSP notes.

The solution: The NSP proposes scaling of rapid molecular tests that diagnose drug resistance better. It says all patients diagnosed with TB should be tested for resistance to rifampicin. In 2016, 29.7% of those registered with the government--520,000 patients--were tested for drug resistance, according to the NSP.

Further, because many don’t seek treatment for TB, it is “highly imperative to shift from the passive to active” in looking for people infected with TB, the NSP says. It proposes actively sending healthcare workers for community screening of vulnerable populations such as those living in slums, prisons, old-age homes, refugee camps and tribal areas, as well as construction workers, the homeless, street children and mine workers.

The challenge: Out of those TB patients who reached the government system–72% of India’s total TB cases in 2013–more than half a million patients were either not diagnosed correctly, or diagnosed but not registered for treatment, IndiaSpend had reported in November 2016.

Further, not everyone who registers for TB treatment is cured. In 2014, for instance, 37% of those who were re-treated--after they defaulted on treatment or did not get cured with the previous treatment regime--remained uncured, according to data from the 2016 annual TB report.

Those who are untreated or partially treated can spread the disease to others, and potentially increase drug-resistant forms of the disease.

Even though the ‘Standards for TB Care’, a health ministry guide for TB treatment in India, recommends that patients be examined after six and 12 months of treatment completion, the RNTCP does not provide data on whether all TB patients were still free of TB one year after completing treatment, as IndiaSpend reported in November 2016.

As such there is little information on long-term health outcomes, the NSP says, which means the TB programme would be unaware if a patient who successfully completed treatment relapsed after six months.

The solution: By 2020, the NSP proposes to ensure TB patients and their families incur no economic costs, whether of treating the disease or taking care of a patient. For this, the program proposes a Rs 2,000 direct benefit transfer for patients’ nutritional support during the course of treatment.

The programme will also provide a monthly support of Rs 500 to incentivise treatment completion.

Further, the NSP proposes a patient-centred approach: A treatment plan that meets the patient’s needs, regular counselling of the patient and their family, supervision of treatment by a trained supporter, as well as nutritional and psycho-social support.

The program suggests collecting patients’ Aadhaar numbers, a unique government-issued identification number, and phone numbers to track their treatment status. It also suggests scaling up of programmes that use call centres for user-friendly private reporting and patient monitoring.

Further, the NSP proposes implementing a WHO-recommended 9-11 month treatment regime for multidrug-resistant TB, shorter than the current 24-27 month treatment that is difficult to complete. The shorter treatment will be provided to all TB patients resistant to the main anti-TB drug, rifampicin, by the end of 2017, the NSP said.

As much as 40% of the Indian population is infected with Mycobacterium tuberculosis, the bacteria that cause tuberculosis. In many people, the bacteria is latent, meaning the person does not suffer from disease, although people with latent TB have a 10% risk of re-activation of the bacteria, which would result in disease. There is a 5% risk that those with latent TB will develop the disease within two-five years of acquiring the infection.

It would be “financially prohibitive and logistically difficult to find all of these people in India”, the NSP says, suggesting that preventive treatment focus on key populations such as those living with HIV; children who are in contact with TB patients; patients with silicosis, a lung disease caused by continuous exposure to silica; and other vulnerable groups.

But to reach the goal of elimination, “we will have to prevent people from getting tuberculosis 40 years from now”, Swaminathan said. This is possible with a strategy that not only treats active TB cases but develops new vaccines for the disease or preventive medicines, for which, she said, “research and innovation is critical”.

Further, Swaminathan said, the TB programme should target women, especially in states that have high gender inequality, where women are more likely to be undernourished as well as less likely to seek treatment for TB. Not only do women face the burden of disease second-hand as they are more likely to take care of a family member diagnosed with TB, women are also more prone to certain kinds of extra-pulmonary TB that are hard to diagnose, she explained.