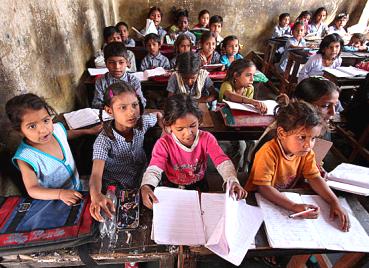 * US continues to be the highest donor to India.

* Delhi, Tamil Nadu get the most of aid funds.

India is among the fastest growing economies in the world, and is the 9th largest economy with a GDP of $1.6 trillion in 2011… but the country is also ranked 7th among the recipients of overseas development assistance (ODA) after Afghanistan, Ethiopia, Pakistan, Tanzania, Vietnam and Haiti.

So, who provides the aid and who gets them? Equally, from a pure economic standpoint, does India need these contributions? For instance, former Finance Minister Pranab Mukherjee, during a visit to the United Kingdom, had said that India did not need UK aid.

IndiaSpend’s Prachi Salve looks at how much aid India gets by analysing the data from the Home Ministry and the Ministry of Finance for this article while there could be funds flowing in from other sources as well not accounted for by the ministries. The key findings: Small contributors account for most of the foreign aid, and social organisations working in the fields of health and education get maximum funds from the donors. And establishment expenses of these organisations accounted for over Rs 1,400 crore in 2009-10.

Foreign Contributions Regulations Act or FCRA permits organisations or associations to accept foreign contributions either by registration or prior permission from the central government under the Act.An association is defined as a collective with a cultural, economic, educational, religious or social agenda.

How Much Money Is Coming In?

The total amount received as foreign contributions under FCRA was Rs 10,337.59 crore (over $2 billion) during the year 2009-10, according to the annual report published by the Home Ministry. 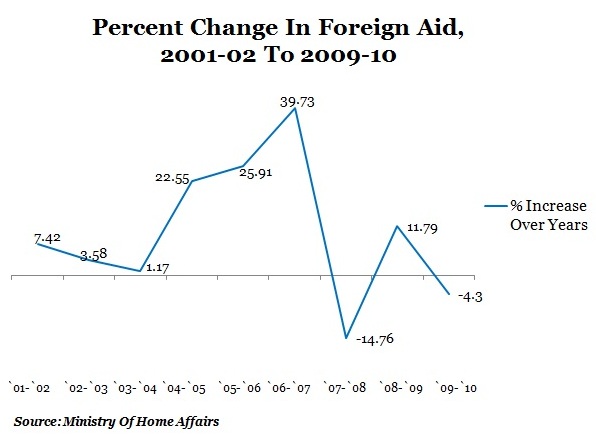 Table 1 below has the figures in a little more detail

Table 1: Foreign Contributions Through The Years 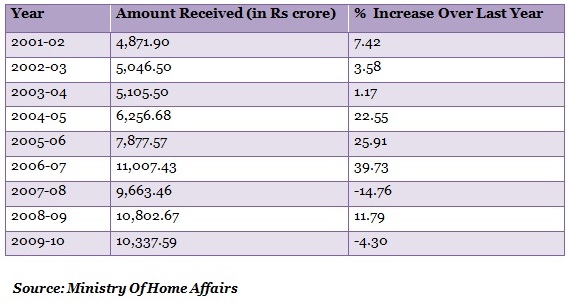 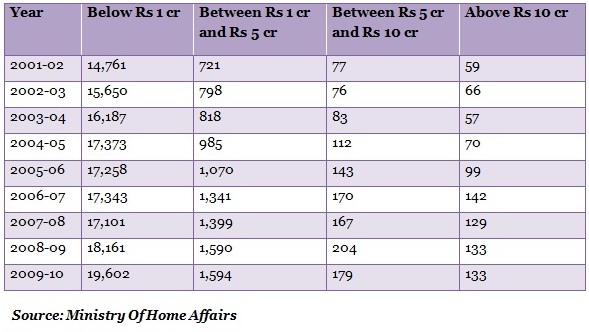 India is a member of many multilateral organisations like the United Nations and the Asian Development Bank. So, the government receives interest-free loans, technical assistance for everything from economic development to gender equity and welfare. Table 3 shows receipts in the form of loans from multilateral organisations for 2009-2010 and 2010-11. 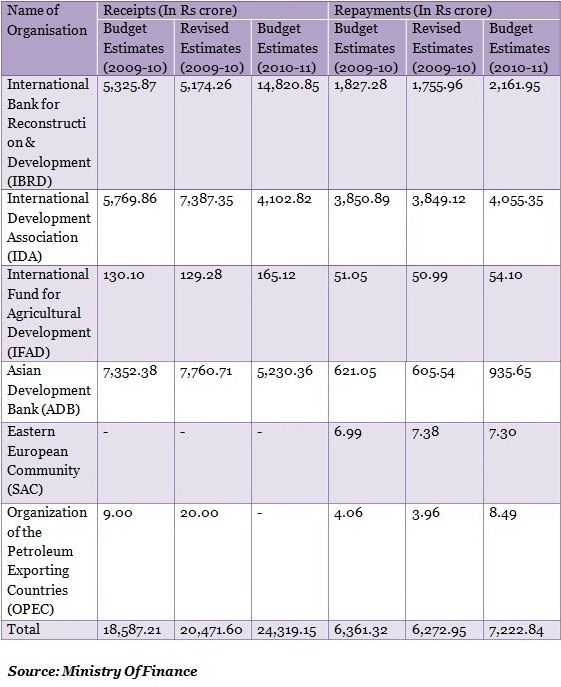 While India has increased its borrowing, there is an increase in the repayments as well. The highest receipts have been from IBRD while the highest increase in repayments has been to IDA. Interestingly, the Indian government has not received anything from SAC from 2009 to 2011 but has repaid nearly Rs 7.30 crore.

US Continues To Be A Big Donor

United States continues to be a major donor for India, and has contributed three times as much funding as Germany and UK, which were the second and third largest donors, respectively. The impact of the on-going recession is evident on fund flows as most countries have not increased aid for nearly three years. And there has been a decline in aid from the EU countries. 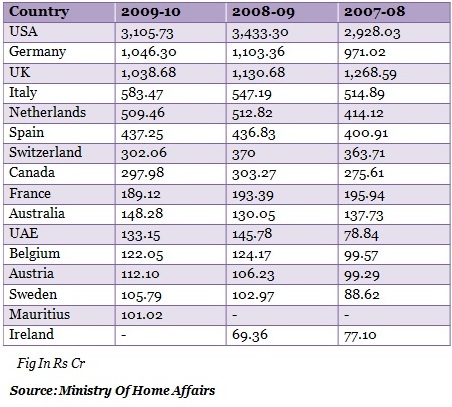 Education, Health Get Most Funds

Most of the aid to India (nearly 96%) comes in the form of sector-allocable funds followed by humanitarian and commodity aid(inflows of goods and services with no payments). Among social sector funding, most of it goes to health followed by education, reproductive programs, water supply, sanitation and civil society. 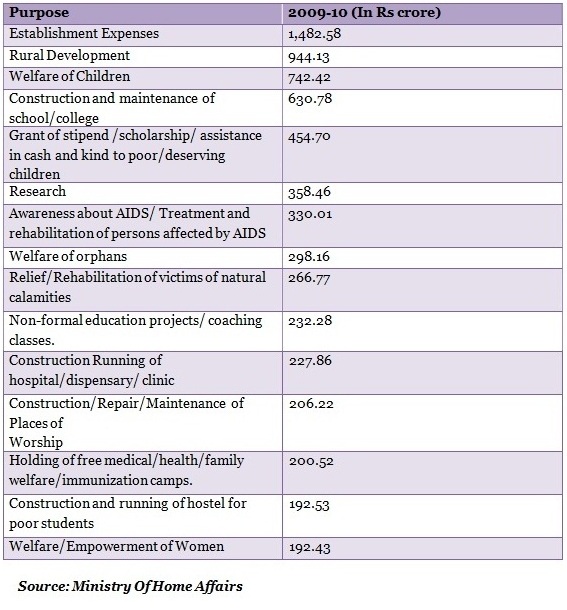 Delhi, Tamil Nadu Get Most Funds

Delhi has received the maximum aid from foreign contributors followed by Tamil Nadu while Rajasthan and Himachal have received the least amount of foreign aid. 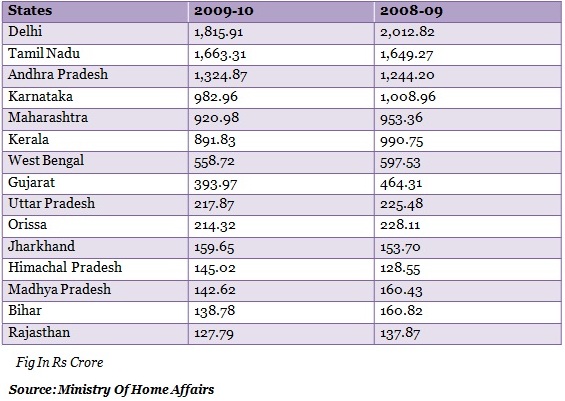 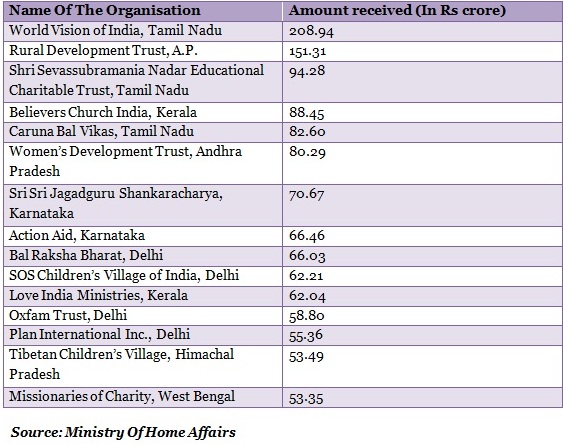 The government has changed the policy around foreign aid and has limited the number of donor countries but has allowed development assistance to non-government organisations and universities…. and international aid is now concentrated on developing social sectors like education and health.

To answer the question we asked at the outset, does India need foreign contributions? It would appear that the monetary value is not much but the impact value could be arguably higher, particularly in some areas. It could also be argued that a sum like this or more can additionally be generated from within the country for the same or similar objectives. Once again, this is a pure economic statement.