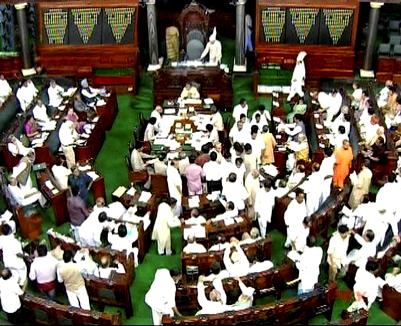 Do we need a Minister of Steel, or Coal or Non-Renewable Energy? There could be many ways of answering that question. IndiaSpend’s Bhumish Khudkhudia tries to answer this by highlighting the Indian Government’s own introspection in this regard. And contrasts this with countries like the United States, and concludes, well, the obvious.

Let us look at the government’s take which covers most, though not all the possible permutations. The Second Administrative Reforms Commission (ARC) was constituted in August, 2005, under the chairmanship of Veerappa Moily. In its 13th report – Organisational Structure of Government of India – it said that the number of ministries could be reduced from about 55 at present to about 20-25.

Take “Transport” as a department. As many would know, different aspects of the subject are dealt with in different ministries. The Ministry of Civil Aviation deals with air navigation and carriage of passengers and goods by air while the Ministry of Railways is responsible for all aspects of rail transport.

Similarly, Ministry of Shipping, Road Transport and Highways deal with maritime shipping and navigation, highways and motor vehicles, respectively. The Ministry of Urban Development deals with planning and co-ordination of urban transport systems. Thus, “Transport” is fragmented into multiple disciplines and assigned to independent ministries. Arguably, this makes an integrated national approach difficult.

Similarly, Energy is now being handled by at least four different ministries i.e. the Ministry of Power, Coal, New and Renewable Energy, Petroleum and Atomic Energy. The Planning Commission wrote a document titled “Integrated Energy Policy” to deal with the whole gamut of issues pertaining to energy within one policy. But linkages between ministries are weak and thus difficult to devise national energy strategies.

According to ARC, there is a need to strike the right balance between the requirements of functional specialisation and the need for a holistic approach to key issues. Democracies like the UK and the USA have attempted to achieve this by having between 15 and 25 ministries headed by cabinet ministers and assisted by other ministers.

A pragmatic approach for India, the ARC feels, would be to retain the existing council of ministers but increase the level of co-ordination among the departments by providing for a senior cabinet minister to head each of the 20-25 closely-related departments.

He/she may be designated as the “First or co-ordinating Minister” (or any other suitable nomenclature) and would co-ordinate and provide the overall lead for the entire group of departments. The commission recognizes that for this arrangement to work, adequate delegation and division of work among the concerned ministers would have to be worked out.

Interestingly, the ARC has proposed a rationalised structure as well:

1) The Ministry of Local Government could include the following ministries or departments:

b) Drinking Water and Sanitation

2) The following ministries could be clubbed under the Ministry of Transport:

b) Road Transport and Highways

3) Similarly, the Ministry of Energy could include the following ministries:

b) Petroleum and Natural Gas

For comparison, here is a look at how the departments are organised in the United States of America:

Departments In United States Of America

Name of the Departments

DOT’s overall objective of creating a safer, simpler, and smarter

DOT employs almost 60,000 people across the country, in the Office of the Secretary of Transportation (OST) and through 12 Operating Administrations (OAs) and bureaus, each with its own management and organizational structure.

The Department of the Interior (DOI) is the nation’s principal

conservation agency. Its mission is to protect America’s natural

research, conserve and protect fish and wildlife, and honour the Department’s

The Department of the Interior is managed by Secretary, the Deputy Secretary, five Assistant Secretaries (Fish, Wildlife and Parks; Indian Affairs; Land and Minerals Management; Water and Science; and Insular Areas) and eight Bureau Directors.

The U.S. Department of the Interior employs about 70,000 people in approximately 2,400 locations with offices across the United States, Puerto Rico, U.S. Territories, and Freely Associated States*.

To ensure America’s security and prosperity by addressing its energy, environmental and nuclear challenges through transformative science and technology solutions.

Catalyze the timely, material, and efficient transformation of the nation’s energy system and secure U.S. leadership in clean energy technologies.

Maintain a vibrant U.S. effort in science and engineering as a cornerstone of US’ economic prosperity with clear leadership in strategic areas.

Establish an operational and adaptable framework that combines the best wisdom of all Department stakeholders to maximize mission success.

The Department of Energy (DOE) is comprised of three Offices of Under Secretaries (Nuclear Security,

22 operations and area offices, and 24 research laboratories and facilities.

Contractor employees. The large number of contractors is attributable to the highly specialized scientific

Now, let us look at the size of the various Indian ministries and their budgets:

Strength/Size Of The Ministries*

Name of the Ministry

^Ministry of Drinking Water and Sanitation

Ministry of Housing and Poverty Alleviation

-Ministry of Road Transport and Highways-

Ministry of Petroleum and Natural Gas

Ministry of New and Renewable Energy

^In 1999, the Department of Drinking Water Supply (DDWS) was formed under Ministry of Rural Development, for focused attention on drinking water and sanitation. Later was renamed as Department of Drinking Water and Sanitation in 2010 and in 2011, it was conferred the Ministry status, keeping in view the extreme importance given to the sector by the ruling government.

Administrative Costs In Running The Ministries

Name of the Ministry

The administrative costs are not comparative. It would still appear that the bigger loss in departmental spin-offs is not so much cost – for which a far more detailed study is required – but the evident inefficiency in co-ordination. This is also not a front burner issue. And perhaps that’s where the problem lies.