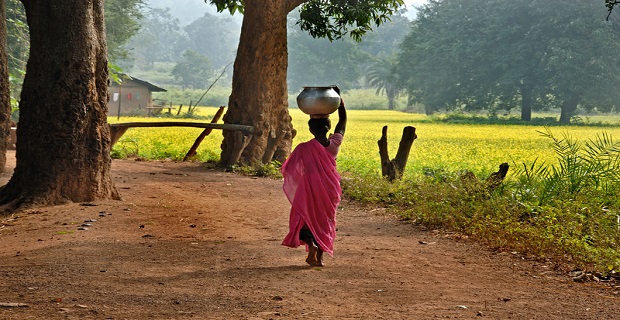 Highlights:*Chhattisgarh agriculture and allied growth was 7.2% while All-India growth was 3.9%

*The 2011 India Human Development Report of the Planning Commission of India ranks Chhattisgarh the lowest among the Indian states.

Are stable Governments good for India’s states and their people? You might be forgiven for thinking the answer is a yes. Actually, it leans the other way - not necessarily so.

This is one of those exercises which might provide only a few definitive indicators but interesting to embark on nevertheless. Why is the co-relation between good performance and political stability tough to establish? Because, you might ask, for instance, what does ‘good’ or ‘better’ mean?

The good news is that there are some common indicators to go by. And here we attempt to use them by zooming in on Chhattisgarh which is gearing for legislative elections in October 2013.

Chhattisgarh is one of the newer states of India; formed in 2000, along with Uttarakhand and Jharkhand. Chhattisgarh has political stability in the state.

Upon its creation, the Chhattisgarh government was headed by Ajit Jogi of the Indian National Congress, who served as Chief Minister for 3 years. Since December 2003, Raman Singh of the BhartiyaJanta Party has been Chief Minister.

Comparably, Uttarakhand has had six Chief Ministers and Jharkhand five with three spells of President’s Rule.

Let us see how the top five politically stable states and ‘unstable’ states fare. Five indicators have been used to compare these states with all-India figures.

Incidentally, IndiaSpend earlier put together a comparative analysis of the three newer states of India and how they performed better in terms of growth and other development indicators against their respective parent states.

West Bengal has seen the longest serving Chief Minister - Jyoti Basu of the CPM - from 1977 to 2000. Buddhadeb Bhattacharjee, also from the CPM, took over in November 2000 and continued in office till May 2011. A Trinamool Congress government, headed by Mamata Banerjee took over in a dramatic entry two years ago. It is no revelation that while there was a stable government in Bengal for many decades, there was not much by way of growth.

There are other states that have witnessed political stability in the past decade. 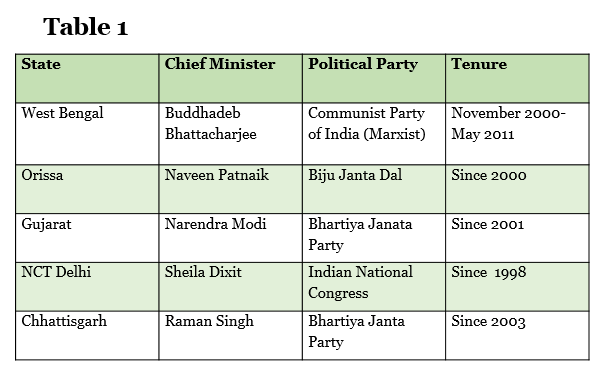 The other states that have demonstrated similar stability are some of the north-eastern states of India namely, Assam, Tripura, Sikkim and Manipur. But because of their small size, it would not be fair to compare those with the larger states.

Two others, Maharashtra and Madhya Pradesh have seen same parties rule for a decade now but with different Chief Ministers. There are also states like Rajasthan, where the governments have lasted full five-year terms but the rule has alternated between different political parties.

The states of Jharkhand, Uttarakhand, Uttar Pradesh, Karnataka and Jammu and Kashmir have seen assemblies with unclear majority in the past decade. In any Indian state, if there is no clear majority for any party, the Governor of that state can declare a state emergency. This is also known as President’s Rule.

When state legislatures are hung, the central government has the power to make laws for that particular state, till a government can be formed. If a state witnesses spells of President’s Rule it would naturally imply political instability. Some of the above states did not face state emergencies per se, but could be termed unstable (for the purpose of this report) because of frequent changes in ruling parties or Chief Ministers, as in Uttarakhand.

Now let’s see if there is any co-relation between stability and economic growth. Note that the last seven years have been generally good for most states, as they were for the country. 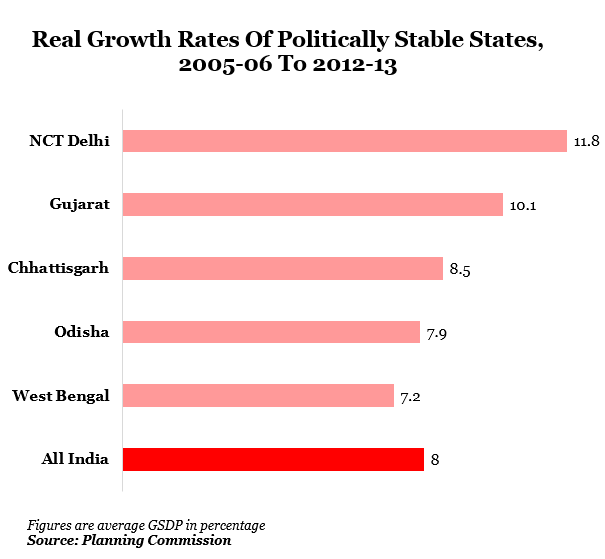 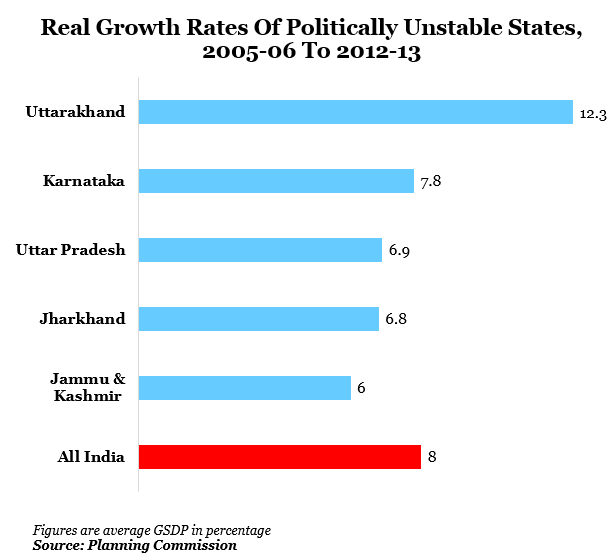 GSDP or Gross State Domestic Product at constant prices is a measure of the real growth rate in a state. The above illustration suggests that states with stable governments have marginally performed better than those with unstable governments. Arguably, these are not conclusive numbers. And do not reflect the overall prosperity or quality of life for citizens.

The province of Odisha is one of the most backward regions of India. West Bengal, on the other hand was under the rule of the left-leaning CPM. Uttarakhand performed well, evidently because of its industrial policies.

Agricultural and Industrial growth in Chhattisgarh

Data released by the Planning Commission of India on agricultural growth and industrial growth, shows of Chhattisgarh with higher averages than the all India average. 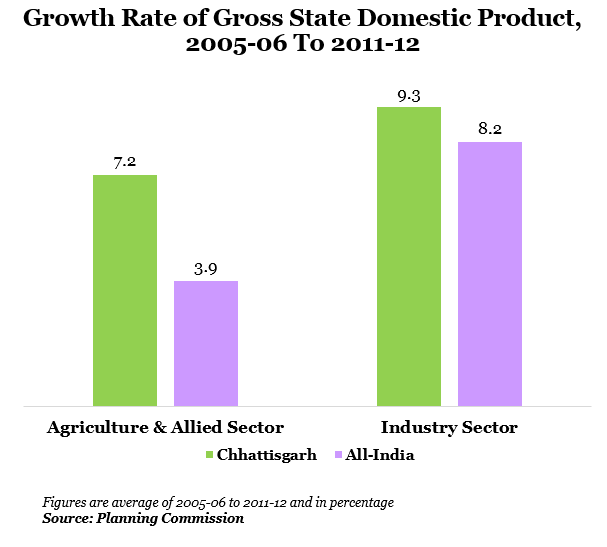 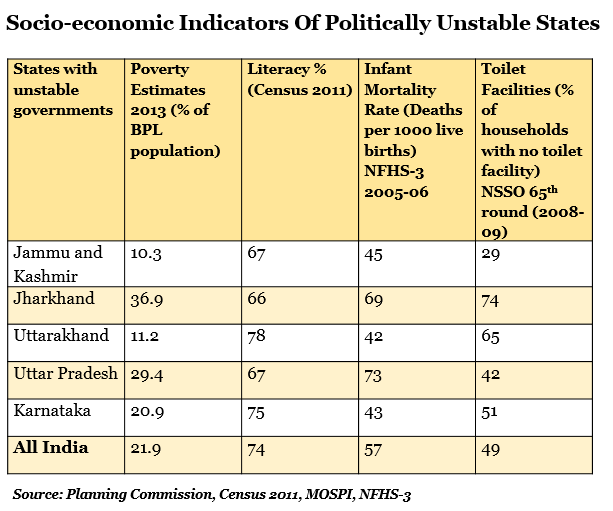 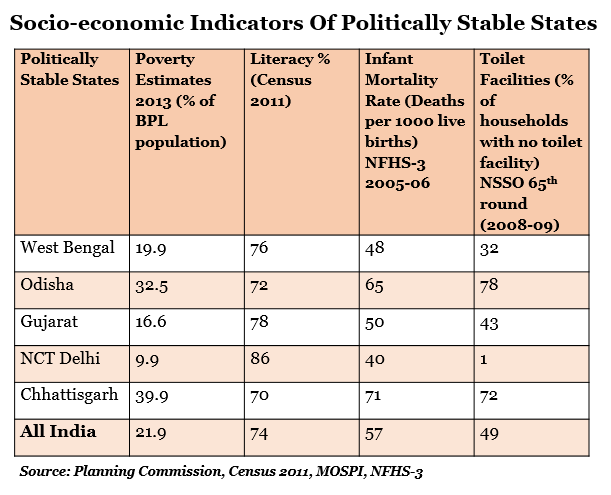 High on economic growth, but low on human development-

Chhattisgarh has the highest percentage of poor in the country according to the latest Tendulkar Committee Estimates Report (2013). Though the percentage of the Below Poverty Line population in the state has gone down from 48% to 39% since the last poverty estimates of 2009-10. The correlation with political stability is however not clear, at least from these data sets and to us.

States with high political stability have higher literacy rates than the ones with low stability. Chhattisgarh comparably, has a lower literacy rate than the all India average. There has been an increase in the percentage of literates from 65% in the 2001 census to 70% in the 2011 census.

According to the NFHS 3 report, Chhattisgarh has the second highest infant mortality rate after Uttar Pradesh. And scores low on other socio-economic indicators such as 72% of the population without toilet facilities.

Stability is good but evidently does not produce better economic or social indicators. The reason a state Government is returned to power could be a combination of many things of which economic and social indicators are also important. But unlikely the only reasons. As most readers of this piece would know only too well.

In some states, strong economic and social indicators might guarantee a re-election. On the other hand, states who are weak on these indicators might win the hearts of the populace because of other reasons, such as a feeling of community, safety or security. Or just promises of a better future.

Editor: We invite thoughts and comments on whether the data presented here can be viewed differently. Or if you don't agree !