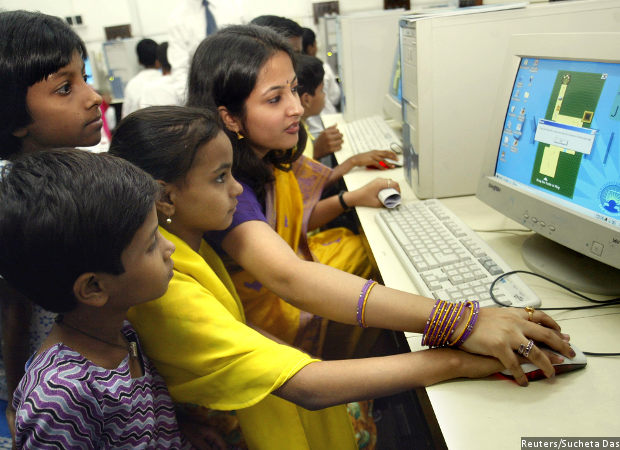 Recent indications that India's Internet use is low and not reflected in the numbers of mobile-phone connections and growth are buttressed by a new study that points to digital inequality in urban areas.

Carried out in Pune, a rapidly growing metropolis of 5.92 million people, its economy driven in large part by information technology, the study found:

* 82% of people surveyed in low-income neighbourhoods don't use Internet.

* 56% of households have no Internet users at all.

* 41% of non-users have never heard of the Internet.

The results are likely to be similar in more prosperous cities, such as Bengaluru and Delhi, worse in poorer cities.

Although Internet users in India are increasing rapidly, and the country is Asia-Pacific's fastest-growing smartphone market, only 22% of the adult population in India uses the Internet, compared to the global median of 67%, according to this survey by Pew Research Center, a US research institute.

India lags most major economies and performs worse than Nigeria, Kenya, Ghana and Indonesia, among other countries, the data reveal.

Yet, in absolute numbers, India likely overtook the US and became the country with the world’s second-largest Internet market, with 402 million active Internet users in December 2015. These figures clearly hide great variations, the Pune study revealed.

The study, “Towards Digital Inclusion: Barriers to Internet access for economically and socially excluded communities” conducted in low-income and socially excluded neighbourhoods by the Centre for Communication and Development Studies (CCDS), a Pune non-profit, provides rare empirical evidence of digital inequality.

Pune has grown rapidly over the last two decades to become the eighth-largest urban agglomeration in India. In 2015, Pune ranked second only to Bengaluru in software exports from India.

The city has as many as 3.6 million Internet users (a 34% year-on-year growth), according to “Internet in India 2014”, a report from Internet and Mobile Association of India.

These are the six main observations the study made about Pune's digital inequality:

Only 26% of all Internet users were women, and 84% of all surveyed women do not use Internet, compared to 42% of all men.

There are several stereotypical beliefs that augment this gender digital inequality, according to the CCDS study. For instance:

Boosting Internet access for women has the potential to boost their participation in the labour-force participation, according to this Mckinsey study.

As the chart below shows, the number of non-Internet users decreases with increasing education levels. Of those who never attended school/had any primary education, only 3% access the Internet, compared to 83% of those who are graduates and above.

3. Wealthier households are more likely to use Internet

4, Younger people are more connected to the Internet

53.5% of all Internet users were between 16 and 20 years of age. The percentage decreased with age, as the chart below shows.

46.5% of Internet users were students, while 26.2% were in the service sector, establishing a link between occupation and access.

6. Having a smartphone increases chances of Internet use

“Smartphone users are leading India’s Internet growth,” said this recent report from Google India. A direct correlation between access to Internet and smartphone ownership was noticeable in the Pew survey.