Bengaluru: Common Service Centres (CSC), the privately-run, Internet-enabled outlets meant to provide government-to-consumer (G2C) services across rural India, are failing to deliver in Jharkhand, according to a survey in the poll-bound state.

They are also frequently offline and hence dysfunctional due to sporadic electricity supply and patchy internet connectivity.

The survey findings are significant in the light of a recent memorandum of understanding (MoU) signed between the CSC-Special Purpose Vehicle and the Ministry of Panchayati Raj to begin the process of transforming “all gram panchayats into paperless, digital panchayats”.

Digital delivery of government services has been a favoured poll plank for the Bharatiya Janata Party (BJP), which rules at the Centre as well as in Jharkhand, where it will seek re-election in elections over five phases starting November 30.

CSCs were established in 2006 under the National e-Governance Plan and are a “strategic cornerstone” of Prime Minister Narendra Modi’s Digital India Programme. Jharkhand, which ranks 34th out of 36 in Human Development Indicators in India, was one of the first states to achieve 100% CSC roll-out.

Entrusted to bring ‘public services closer home’, these centres are run by private individuals, who are referred to as Village Level Entrepreneurs (VLEs). These ‘entrepreneurs’ receive a commission from the state government for every service they provide. They are expected to be “change agents” to enable “community participation and collective action for engendering social change”.

Prime Minister Modi has spoken about how more than 300,000 such centres are achieving the “dream of Digital India”. During his 2018 Independence Day Speech, Modi had said that these centres were “rendering ‘anytime-anywhere connectivity’” services to every citizen in villages through optimal utilisation of information technology”.

The survey findings, however, contradict Modi’s claims in at least one state--Jharkhand.

interviewing 401 users of CSCs, called Pragya Kendras (PKs) in Jharkhand, and 61 VLEs in 10 districts in June 2018, researchers asked users about their awareness and experience of accessing the nature and type of services at the PKs, the resources it took, and how grievances were resolved in case of problems. The VLEs were asked about the services they offered, their financial sustainability and their perception of themselves as entrepreneurs or as government servants.

Only 37% of all PKs in Jharkhand actually operated in the gram panchayat bhavans, as mandated for easy accessibility, in the surveyed districts in June 2018.

Lack of electricity and internet connectivity were cited as the main reasons for low usage of PKs. Out of the few PKs that did operate out of the Panchayat Bhavan, about one in four users did not use the PK nearest to their homes. Despite many PKs not operating at the panchayat bhavans, users felt that they were a convenient add-on to existing service delivery channels.

Users were significantly overcharged for services, despite the existence of an official rate chart, the survey found. The rate chart is to be prominently displayed outside every PK but this is not always done so, or displayed in a poor, illegible manner. Users paid an average of Rs 101 to get a certificate, such as for birth and caste, issued despite the government-specified rate being Rs 30. Similarly, they paid an average of Rs 80 for every Aadhaar-related service even though these are free, the survey found. 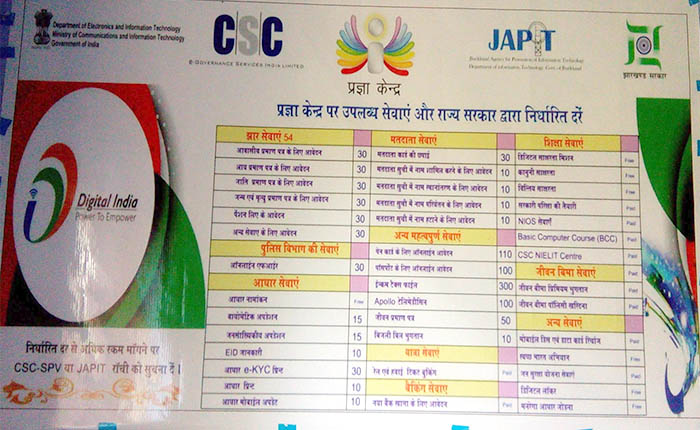 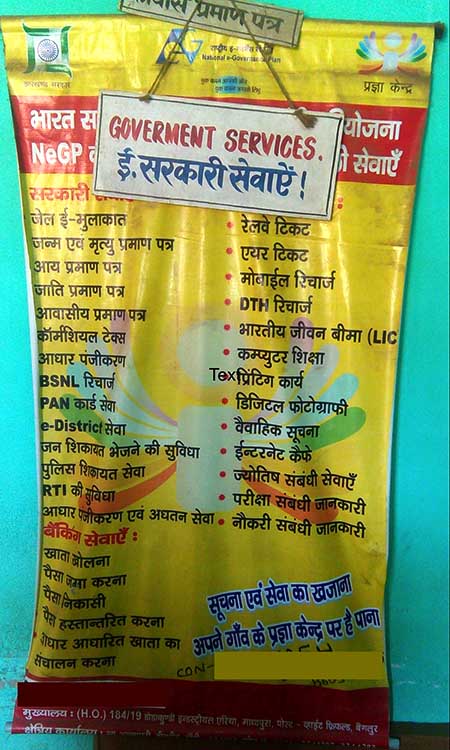 Source: https://pkas2018.wordpress.com/ (photos were taken by local and student volunteers)

Only 22% users said they had seen a display chart at PKs, the survey found. Low awareness and absence of clear official rate charts may be one reason why VLEs get away with swindling users. About 40% of users thought that the VLE fixed the rate for services and 43% said they were unaware about whether it was the government or the VLE who fixed the rate, the survey found.

Of the 401 users surveyed, 37% said they had to revisit a PK owing to network/electricity-related problems, the survey found (Table 2). On average, users had to visit a PK more than six times for a certificate, three times to avail a banking service, and more than eight times for other services. These unchecked hardships are counter-intuitive to the design and purpose of PKs.

The CSCs provide financial services to “unbanked and isolated rural communities” and as such are “probably the largest financial access point network in the world”, according to Dinesh Tyagi, who heads the CSC e-Governance initiative. In Jharkhand, rural banks are sparsely located and hence overcrowded.

The survey reflected this ground reality given that banking was the second most frequently used service at PKs. But users faced several hindrances. For instance, 63% of those surveyed did not get a receipt or a paper acknowledgement for their transactions and about a third were directed to visit a bank branch instead.

Provision of these receipts/acknowledgement slips is critical because PKs do not offer passbook updation services. The receipts then are the only way for users to track their banking transactions. The absence of these paper trails can leave them susceptible to fraud.

For Aadhaar-related transactions, 42% users had to additionally visit a mukhiya (official), the survey found. As per the VLEs, 42% users’ biometrics do not work in the first attempt.

Officials at big banks across Jharkhand frequently turn away users from the branch, asking them to withdraw amounts below Rs 10,000 at their local PK, the researchers found. In case they are unable to withdraw from the PK due to biometric authentication failures, they are asked to procure a signed letter from the VLE stating that their biometric authentication has indeed failed.

VLEs are in it for money

The survey found large socio-economic variation among the users and the VLEs. Among the VLEs, about 15% were Dalits/Adivasis (“lower” castes/tribals) in sharp contrast to the sample users’ profile and that of the overall profile of Jharkhand: 40% of the state’s population are Dalits/Adivasis.

This skew was manifest in gender representation as well as education levels. The survey found that 93% VLEs were male even as the state has a 49% female population. And while more than 90% VLEs had studied till class 12, 37% users lacked literacy or had completed less than five years of schooling.

The VLEs contradicted the prime minister’s ‘anytime-anywhere connectivity’ claim when they cited infrastructure and utility problems as the main reason for not being able to operate at the panchayat bhavans.

More than half (54%) the VLEs said they relied on additional sources of income, according to the survey. They said that commissions did not make setting up a PK commercially viable, with over 90% saying they preferred a fixed monthly salary instead of commissions.

VLEs reported earning an average of Rs 3,000 per month, whereas they reportedly spent Rs 87,000 in order to set up a PK. About a quarter said they had to pay ‘extra set-up cost’ to officials. Most of the VLEs indicated that the low commissions render the model financially unsustainable. Moreover, state officials acknowledge that VLEs overcharge the users.

This contradicts the financial sustainability goal of the model. “We are able to maintain because we have a shop too,” one VLE told us. “Many others have started providing these services. This decreases our profit margin as we are losing customers.”

Referring to users as customers was common, the researchers found, which is at odds with the government’s expectation of VLEs becoming agents of social change in the community. None of the VLEs saw themselves as such change agents and community mobilisers. From the VLEs’ perspective, sustainable employment was the predominant reason for them to start a PK.

No mechanism for grievance redressal

All such hardships are worsened by the lack of credible grievance redressal mechanisms--for both the users and the VLEs. While the state does monitor each VLE, they are not accountable to their users. Nor is there a feedback mechanism or a robust grievance redressal system in place.

A majority (75%) of users said they were unaware that they could file complaints against the PK if there are problems.

Another 22% who wanted to file a complaint against the PK did not. “I do not know where to complain,” one user told us. “It is a private enterprise so accountability is low.”

An alternative, not a substitute

The current digital platform for services comes in the way of accountability and transparency, according to stakeholders, including users, VLEs, government officers and civil society members. As things stand, technology has become a smokescreen and the baton of accountability is passed on to the “computer” (Table 3).

The PKs can be a healthy addition and not a substitute to public service delivery mechanisms, as recommended by stakeholders during a public consultation in state capital Ranchi. Their operational design must incorporate participatory democtratic ideals instead of relying on privatisation as the sole mantra of governance.

(Anognya Parthasarathy is a student of Public Policy with National Law School, Bengaluru. Rajendran Narayanan, who teaches at Azim Premji University (APU), Bengaluru, conducted the research, together with Inayat Sabhikhi from Harvard University, USA and Rahul Lahoti from APU.)