Diabetes: The Epidemic That Indians Created 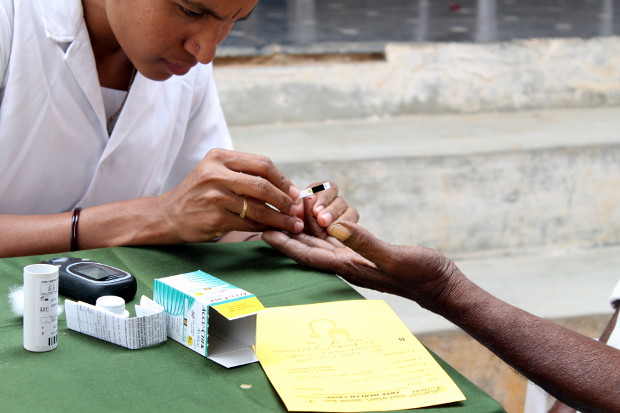 A villager in rural Karnataka having his blood tested at a diabetes screening camp. Image: Flickr/Trinity Care Foundation

Meerut’s Sharad Tripathi developed diabetes five years ago, at 33, “no thanks to the stressful life of a sales person that involves a lot of travel, eating out and irregular meal times, and no time for exercise.”

Just when Tripathi learnt to manage his condition—with medication and lifestyle changes—his mother, in her mid-sixties, developed diabetes. Tripathi senior joined the club a year later, at age 70.

Tripathi found himself sharing the dos and don'ts of living with diabetes with his parents. The family’s predicament indicates how fast the disease is sweeping India, enveloping entire generations, ignoring age and setting new global records, as it trebled over the past two decades. 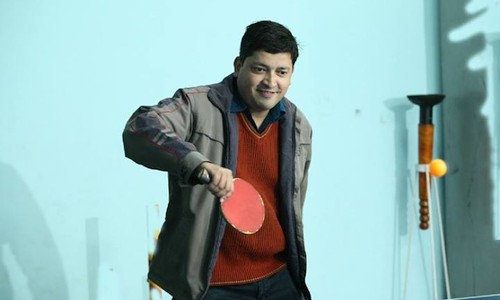 Sharad Tripathi, 38, from Meerut has been living with diabetes for five years. After he was diagnosed with diabetes, his parents were too.

Another 77 million Indians are currently believed to be pre-diabetic, according to the Indian Council of Medical Research.

Diabetes in India now cuts across all age groups and geographies. Although it is more prevalent in urban areas, rural India will catch up as lifestyles change. In cities like Chennai, Delhi and Kochi, one in five adults is diabetic.

There is little doubt that India is witnessing a diabetes epidemic—brought on by Indians.

Diabetes mellitus, to use its scientific name, is associated with elevated blood glucose (sugar) levels because the body produces insufficient insulin or because the body’s cells do not respond properly to insulin, or both. It is mainly of two kinds—type 1 and type 2.

Type 1 diabetes is insulin-dependent. In this, the body produces no insulin at all so diabetics need insulin shots to survive, let alone manage their disease.

Type 2 diabetes is more common, accounting for 85 to 95% of all cases in developed countries (higher in developing countries). It can be managed with oral medication, especially in the early stages.

“Our professors in medical school taught us that type 2 diabetes happens at an advanced age,” said Mumbai diabetologist Pradeep Gadge. “Whereas, type 1 diabetes mostly afflicted the young, so it used to be called juvenile diabetes. No longer.”

About 2% of Gadge’s child patients have type 2 diabetes. Childhood type 2 diabetes is also a growing phenomenon across India. So, doctors have stopped referring to type 1 as juvenile diabetes.

Some offer the old nature excuse for India’s diabetes explosion—that a predisposition to diabetes is written in our genes.

Those of Indian ethnicity have a genetic propensity to acquire metabolic syndrome, a set of five conditions of which you need only three to enter the class. One condition is both visual and measurable: the apple-shaped body. The others are measurable: high blood pressure, low high-density lipoprotein (HDL), high triglycerides and high fasting blood-glucose.

Metabolic syndrome increases the risk for developing diabetes over the next five years five-fold, according to Enas A Enas, American-Indian cardiologist and head of the CADI (Coronary Artery Disease among Asian Indians) Research Foundation in the USA.

“If you have metabolic syndrome, consider yourself in line for diabetes,” said Seema Gulati, head of the Nutrition Research Group, Center of Nutrition & Metabolic Research (C-NET), National Diabetes, Obesity and Cholesterol Foundation.

Indians tend to have more fat than muscle at a given body mass index, vis-à-vis Caucasians. “This means even normal weight Indians would metabolically be considered obese individuals,” explained Gulati.

Obesity is a known risk factor for diabetes.

Children of people with diabetes tend to develop the disease. A study in Chennai found 55% of the offspring of two diabetic patients had either diabetes or impaired glucose tolerance, a pre-diabetic condition, compared to 15.6% in those with no family history of diabetes.

The upward trend of diabetes explains why current generations cannot blame their genetic heritage for the ongoing diabetes explosion.

In 1938, a doctor in Kolkata conducted what has become the earliest documented study on the prevalence of diabetes in India. Of the 96,300 patient medical records he screened, A Chakravarthy found only 1% had diabetes diagnosed by glycosuria, the presence of glucose in urine. Today, 12% of Kolkata is diabetic. The big difference between then and now is urbanisation. In rural Bengal, the prevalence of diabetes is still only 4%.

Indians have traded dal-sabzi-roti for pizzas, burgers and other calorie-dense goodies. Researchers Nikhil Tandon and Nishant Raizada estimate that city-dwellers consume up to 32% of the daily energy requirement as fat.

We rely on cars to get around. We’ve hired help and bought machines to perform household calorie-burning chores, and, for the most part, not bothered to replace those activities with exercise. At work too, more Indians than ever before are employed in sedentary white-collar jobs.

In other words, Indians are bringing diabetes on themselves.

It boils down to life choices

If faulty lifestyle is the cause, lifestyle modification is the cornerstone of diabetes management.

Overall, the chances of diabetes depend 80% on the environment, 20% on genes, said Anoop Misra, chairman, Fortis Centre of Excellence for Diabetes, Metabolic Diseases and Endocrinology, and chairman, National Diabetes, Obesity and Cholesterol Foundation.

By aggressively pursuing changes, diabetics can manage without medication or with lower doses of drugs.

Ask Subramanian Sharma. A 55-year-old management consultant living in Pune, he developed diabetes at the age of 32. 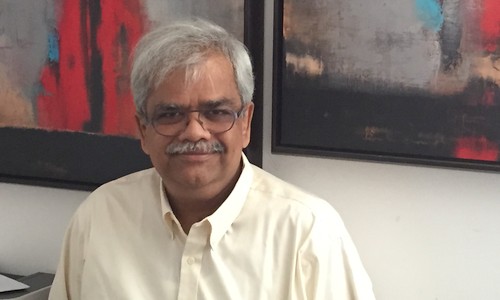 Subramanian Sharma, 55, a management consultant from Pune, came off insulin with the help of a diabetes-reversal programme, a combination of diet, exercise, positive thinking and group therapy.

“I was obese, a foodie and suffered from stress—not that I recognised it. I was living the aspirational life of an IITian and IIMian who made it good, at a time when middle-class India was just starting to indulge itself,” he said. “And no, my parents didn’t have diabetes.”

Over the next two decades, Sharma’s diabetes grew steadily worse—from managing with oral medication, he progressed to four daily shots of insulin, 52 units in all.

In 2013, he heard about Freedom from Diabetes, a programme to reverse diabetes, from Pune-based diabetes reversal specialist Pramod Tripathi. Sharma signed up.

“64% of those who’ve done our intensive 12-week course have come off insulin and/or medication,” said Tripathi.

Sharma is one of the fortunate ones.

“It took me just five weeks to get off insulin, and 12 weeks thereafter to get off medication,” said Sharma. “I’ve also lost 23 kg and shed eight inches off my waist.”

Sharma’s next goal is to improve his glucose-tolerance test score. Considering he’s suffered diabetes for two decades, these are still early days.

But for every Sharma, there are thousands of Seema Shettys. 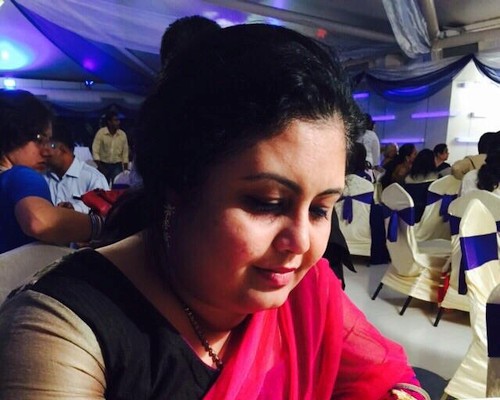 Like most Indians, Seema Shetty, 44, from Mumbai, is inactive. She finds it hard to change her lifestyle and control her diabetes. "I am lazy," she admitted.

Diagnosed diabetic a year ago at age 44, Shetty, a Mumbai resident, takes medicine to control her glucose levels. She is obese and has a family history of diabetes. She understands that regular walks and diet control could take her off medication completely but “I’m lazy,” she admitted.

The only consolation is Shetty is not very fond of junk food, “but I still need my daily fix of rice,” she said. Shetty has cut back on rice from twice a day to once, eats salads for lunch and has an early dinner. “I know it’s bad,” said Shetty about her inactive lifestyle, which is typical of Indians, said doctors, an issue that needs to be addressed en masse.

What could encourage diabetics like Shetty to get more serious about lifestyle changes is greater awareness.

What you know, you can control

Awareness about diabetes is abysmally low in India, both among diabetics and non diabetics.

Only 43.2% of the population knew about diabetes, according to a recent Indian Council of Medical Research study in Chandigarh, Jharkhand, Maharashtra and Tamil Nadu. Just over half of those surveyed knew that diabetes could be prevented and that it can cause complications. Tamil Nadu displayed the most awareness.

Diabetes is a progressive disease, which means the symptoms tend to worsen with time.

When type-2 diabetes is first diagnosed, through a blood test and telltale signs, such as excessive thirst and appetite, and frequent urination, most cases can be managed with medication. Insulin shots are avoided—except in special circumstances—as long as drugs can keep diabetes in check.

Managing type-2 diabetes with oral medication alone is easier, possibly why it is associated with fewer complications, according to a global study of 66,726 diabetics on insulin alone or in combination with oral glucose-lowering drugs. Close to a third of those patients were in India.

Relying on oral medication alone is also less expensive. As it is, diabetics incur costs on doctors’ consultations, monitoring blood-glucose levels, oral medication and/or insulin, special foods and screening for complications. Those with high blood-pressure and raised blood lipids need extra medication. About half of the direct expense is on drugs alone.

It gets worse. Patients may have to bear increased payments for health and life insurance. If complications set in, there’s the cost of hospitalisation, and the loss of income of the diabetic and of the caregiver.

A sure way to avoid extra expenditure and suffering is to take responsibility for your own wellbeing. Stop thinking: once a diabetic, always a diabetic. As much as you may want to live life on your own terms, some transformation is worth it.

Meanwhile, Tripathi (the patient) is setting a good example for his parents. He exercises and stays away from fried foods and sugar.

“Consider the lifestyle changes a blessing of having diabetes,” he said. ¦

You can read the first part of this series here, the second part here, the third part here and the fifth part here.