Mumbai: More than 75% of school-age children in five states were required to provide their Aadhaar--a 12-digit, biometric-based, unique identity number--for school enrolment in violation of a landmark Supreme Court order, as per the State of Aadhaar Report 2019 published on November 25, 2019.

Nationwide, providing Aadhaar during enrolment was mandatory for about 73% of children, the report said: “Even after the 2018 Supreme Court ruling, many families still need to provide Aadhaar for children’s school enrolment.”

The Unique Identification Authority of India (UIDAI), which is tasked with the Aadhaar programme, had stated in December 2018 that “asking for Aadhaar cards for admissions is not as per the provisions of law” and asked schools to ensure that children are not denied admission for lack of Aadhaar.

The apex court, in its judgement in September 2018, had prohibited private organisations and service providers such as schools, banks, insurance firms and telecom companies from demanding Aadhaar data to grant school/college admissions, open bank accounts, give mobile connections, etc. even as it upheld the linking of Aadhaar to permanent account numbers (PAN) and to beneficiaries’ bank accounts to receive benefits under welfare schemes. Critics of the digital ID programme have consistently raised concerns about denial of service as well as highlighted how personal information and biometrics can be used as surveillance tools.

Yet, about 92% of people surveyed for the present report said they were satisfied with Aadhaar; 90% said it kept their data safe; 61% said it prevented others from accessing their benefits, and only 8% worried about its misuse, the report said. In addition, 80% of beneficiaries said Aadhaar had made accessing rations under the public distribution system (PDS), social pensions and wages under the rural employment guarantee scheme more reliable.

This has led to criticism, with some detractors arguing that the findings are overly complimentary for the controversial UIDAI and Aadhaar.

The report’s key contribution is to show that while Aadhaar has reached almost everyone in India, providing access to it and ensuring it works for society’s most vulnerable is an unfinished agenda, said Petra Sonderegger, one of the report’s co-authors from Dalberg Advisors. “This may require targeted support considering that homeless people found providing the necessary documents for enrolment more difficult than others did.”

The Centre for Monitoring Indian Economy and Kantar Public undertook research for the State of Aadhaar Report 2019 (SOAR), the findings were then analysed by advisory group Dalberg, who prepared the report. This is the third time Omidyar Network India has funded research on Aadhaar since 2016--Omidyar Network India is a philanthropic investor in technology, including digital identity, discovering emergent issues and education.

The research covered experience and perspectives from a total of 167,077 residents in 28 states and union territories using three methodologies: a 10-minute pulse survey with 147,868 respondents, a core 45-minute in depth survey with 19,209 respondents in 16 states and one union territory, and in-depth interviews with 103 people (from among the core interview respondents) in four states--from May to September 2019.

“The perspective of people who use Aadhaar ID in their daily lives is important in the ongoing debate around Aadhaar,” said Sonderegger. “That perspective has been captured for the first time across the nation in this report: what works and what doesn’t work for the everyday users of Aadhaar.”

About 13% of school-age children experienced a delay in school enrolment that was related to providing Aadhaar. One-fourth of all children, or an estimated 1 million, not enrolled in schools but whose parents wished to enrol them, could not do so over Aadhaar-related reasons, the report said. 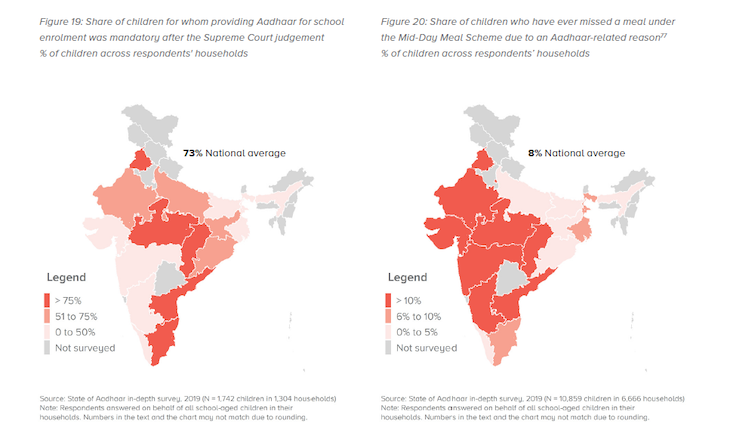 “The Supreme Court ruled that children cannot be forced to get Aadhaar,” development economist Reetika Khera told IndiaSpend. “The government does not appear to care for the Court's ruling, and it remains compulsory for school enrolment. It is also being used to deny enrolment at anganwadis (for children under six). What are parents supposed to do? The more 'practical' option must seem like enrolling their child, rather than fighting a seemingly futile battle against the state.”

Apart from enrolment, not having an Aadhaar meant that many children failed to get free hot meals under the government’s mid-day meal scheme that aims to improve children’s nutrition and thereby boosting enrolment and attendance. Nearly 15 million children, or 8%, missed out on one or more mid-day meals due to difficulties related to Aadhaar, the report said.

Families were also likely to lose out on other welfare benefits if their children did not have an Aadhaar card. For instance, all household members were required to provide Aadhaar to receive their full allotment of PDS rations.

“It is of utmost importance that these denials be eliminated,” said Omidyar Network India’s Subhashish Bhadra. “We also need to make people aware of where Aadhaar is mandatory and where it isn’t. Last-mile service providers also need to be sensitised to the latest norms and procedures.”

The design of digital identity instruments, and their use cases need to be much more thoughtful, said Subhashis Banerjee, a computer science professor at the Indian Institute of Technology, Delhi, who was on the report’s advisory panel. “As things stand now, Aadhaar can be hugely exclusionary with serious negative consequences for child and human rights. The government needs to step back and reassess.”

Aadhaar was the first ever ID for 8%--extrapolated to 67 million--of people, according to the report. “Aadhaar was the first ID for 15% of homeless and third gender populations each compared to 8% for the rest of the population,” said Sonderegger. “Some individuals we spoke to within these groups said that having an Aadhaar afforded them a sense of humanity and freedom from harassment.”

“Of these, about 85% of third-gender persons and 84% of homeless wanted the ID but could not obtain it despite multiple attempts,” the report said. While lack of documents was a major hindrance for the homeless, third gender persons faced another obstacle: their gender on an existing ID did not correspond to their identity or appearance at the time of Aadhaar enrolment. Compared to others, they were four times more likely to have an error in the gender data on their Aadhaar IDs, the report said.

Getting any form of ID for the homeless and third gender persons has been an uphill task, according to people who work with these marginalised communities. More than 1.7 million people, or 0.14% of India’s population, were homeless as per Census 2011. The homeless or houseless are defined as those who “live in the open or roadside, pavements, in hume-pipes, under flyovers, in open spaces, at places of worship, etc”. There were few to no official government data about how many homeless have any ID document.

The homeless are the most vulnerable deprived group, said Sanjay Krishna of Aashray Adhikar Abhiyan, an organisation that works for the homeless. “Government officials don’t want to face them so no real work happens on the ground. Be it a voter or Aadhar card, it needs an address, but this population is mobile in nature and migrates frequently,” he said, “Lack of awareness is another issue. They do not understand the real importance of identity proof.”

The Census 2011 recorded 487,803 ‘other gender’ persons in India. The Election Commission’s data on the electorate for the 2019 general elections indicated that about 8% or 38,325 of them had voter IDs, as per an official release.

Providing supporting documents during Aadhaar applications was problematic for the transgender community, said transgender rights activist Grace Banu. “Transgenders live in rental housing, which makes it difficult for them to furnish proof of permanent residency,” said the Chennai-based activist. “Transgenders are also asked to provide surgery certificate. This violates the orders of the NALSA judgement. Many transgenders do not opt for surgery so they do not have a certificate to submit.”

Citing the case of Tamil Nadu, Banu said that if a transgender individual wants to get a voter ID, they have to first submit a transgender welfare board ID card: “It takes a minimum of eight months to get an ID card from the welfare board, so it is very difficult to get each and every ID card.”

Aadhaar was expected to provide an identity to those who had none, pointed out development economist Khera. “But only 0.03% used the introducer route while the rest got it by submitting a proof of ID and proof of address,” she said, based on information furnished by UIDAI to Right to Information queries in 2015 and 2016. “The [State of Aadhaar report] findings seem to corroborate that those who had no ID to start with have also been left out of Aadhaar.”

Omidyar’s Bhadra presented the data in a different light. The homeless and third gender have a higher proportion (15%) among all the people (8%) for whom Aadhaar was their first-ever ID document, he reiterated. "These individuals [homeless and third gender] have gone on to use their Aadhaar to open bank accounts, buy SIM cards and get food rations for the first time. Therefore, Aadhaar has included millions of new people and this impact has been higher for certain vulnerable groups,” said Bhadra.

While Aadhaar has reached almost everyone in India, providing access to it and ensuring it works for society’s most vulnerable is an unfinished agenda, said Dalberg’s Sonderegger. “This may require targeted support considering that homeless people found providing the necessary documents for enrolment more difficult than others did.”

The survey dataset consists of over 20 million data points and is freely accessible on www.stateofaadhaar.in, said Bhadra. “Researchers and policy-makers can use the dataset to run analysis while civil society may better understand the lived experiences of Indians. It can also help governments understand on-ground implementation and help improve the user experience.”