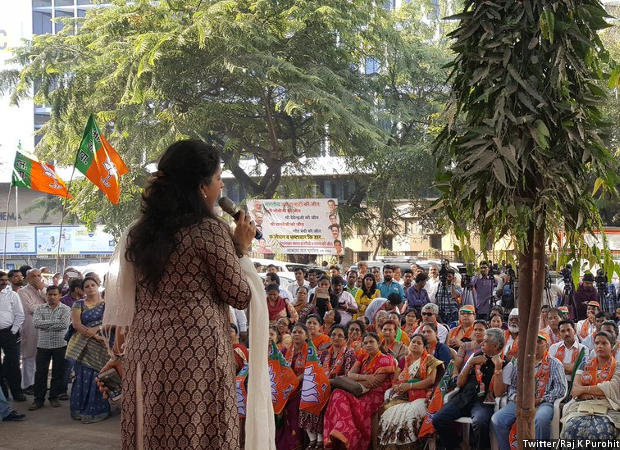 Leaders of the Bharatiya Janata Party celebrate the party's performance in the first phase of Maharashtra’s municipal council elections held on November 28,2016. Despite the negative impact on the rural economy of #Notebandi, it does not seem to have affected the elections.

In the first state-wide election after demonetisation announced by Prime Minister Narendra Modi on November 8, 2016, the Bharatiya Janata Party (BJP) won 893 out of 3,705 seats in the first phase of Maharashtra’s municipal council elections held on November 28, 2016. The party also won 86 out of the 94 seats in the election to municipal councils and taluka panchayat (sub-district council) in Gujarat.

As many as 15,826 candidates were in the fray across 147 municipal councils and 17 nagar panchayats (municipal or town councils) in Maharashtra with around 70% of the electorate exercising their franchise. (The next phase is scheduled for December 20, 2016.)

Here are some developments from the elections:

1. Women and Child Development Minister Pankaja Munde of the BJP was outsmarted by her cousin and Nationalist Congress Party (NCP) leader Dhananjay Munde in Parli, Beed district of Marathwada region. NCP won 27 of the total 33 seats in Parli municipal council.

3. All India Majlis-e-Ittehadul Muslimeen, led by Asaduddin Owaisi, the Hyderabad-based leader, won 40 seats, mostly in Marathwada region, which has a significant Muslim population.

Congress was second in the municipal council elections after winning 727 seats, the NCP bagged 638 seats.

Despite the negative impact on the rural economy of #Notebandi, as IndiaSpend reported on November 26, 2016, it does not seem to have affected the elections.

“BJP has emerged as the largest party. I thank people of Maharashtra for their continued support and faith in BJP's development politics,” BJP national president Amit Shah said.

While local parties such as Peasants and Workers Party of India won 384 seats, unrecognised parties won 119 seats. As many as 28 candidates won the elections without opposition.

Of the 147 municipal councils where municipal chiefs were elected directly, BJP nominees won at 52 places, compared to only six places in 2011 (held through indirect elections within the councils).

“In town after town where the president is from a party in minority in the general body, you can be assured of a serious crisis which could well ensure that the city suffered setbacks in the very purpose which civic elections are held--to ensure a local self-government, where the purpose is to get the citizenry its basic facilities,” journalist Mahesh Vijaypurkar wrote in his column in Firstpost on November 29, 2016.

“What a president proposes can be rejected, though the president has a larger mandate being directly elected.”