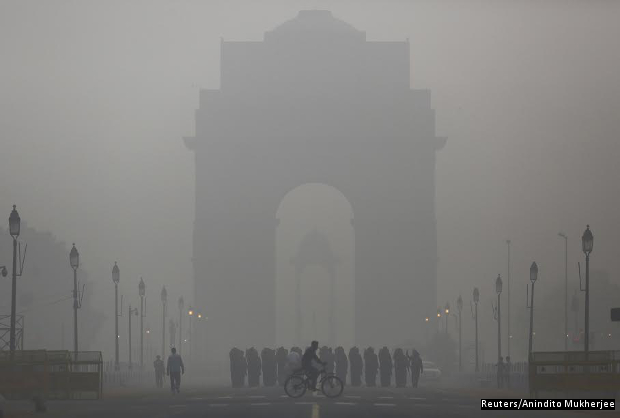 Delhi’s air pollution has been one-and-a-half times worse than in Beijing over the past week, according to an IndiaSpend analysis of PM 2.5 (Particulate Matter) concentration data.

The analysis is based on a comparison of data generated by IndiaSpend’s #Breathe air quality monitoring sensor placed at RK Puram, Delhi with the one placed by the US government in its embassy at Beijing.

The average weekly PM 2.5 concentration in Delhi’s air was 230.9 micrograms per cubic metre (µg/m³), giving it a ‘very poor’ rating of air quality under the guidelines of the Central Pollution Control Bureau (CPCB). The rating could lead to ‘respiratory illness on prolonged exposure’.

Beijing, by comparison, recorded a PM 2.5 concentration of 139.7µg/m³ during the same period.

PM 2.5 are fine particulate matter found in the air with a diameter of 2.5 micrometres or less and are known to pose the greatest risk to human beings. Their measurement is considered to be the best indicator of the level of health risks from air pollution, according to the World Health Organization (WHO).

The PM 2.5 concentration level in Delhi has been higher than Beijing for six out of seven days under consideration, based on a comparison of daily averages.

The ‘severe’ rating means the PM 2.5 concentration is so high that it might affect healthy people and seriously impact those with existing diseases.

Beijing, by comparison, recorded ‘severe’ rating only once in the same period.

Both Beijing and Delhi recorded ‘very poor’ air quality in terms of PM 2.5 concentration (151 to 250 µg/m³) on three out of the last seven days.

Delhi had only one day with ‘poor’ air quality (PM 2.5 concentration between 91 to 150 µg/m³) that could lead to breathing discomfort to most people on prolonged exposure.

Beijing recorded ‘good’ to ‘satisfactory’ air quality on three days (3 to 5 December 2015), which has contributed to a lower weekly average of PM 2.5 concentration. This was the result of strong winds that blew over the city on December 2, 2015 and dispersed the smog. 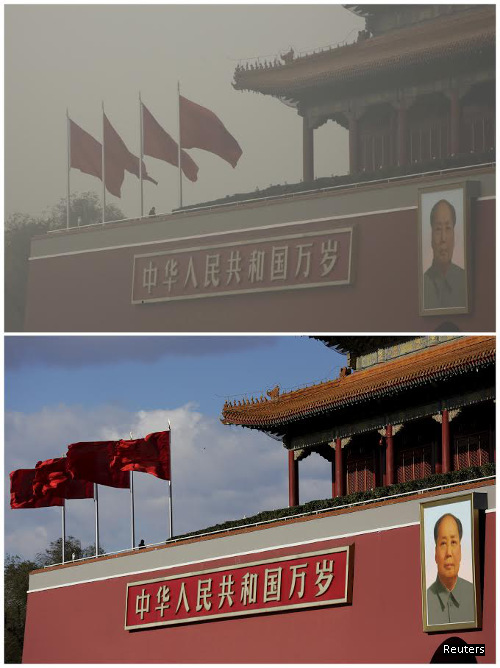 A combination photo shows the giant portrait of Chinese late chairman Mao Zedong on the Tiananmen gate on a smoggy day on December 1, 2015 (top), and on a sunny day on December 2, 2015 (bottom), after strong winds cleared the smog that was blanketing Beijing.

The WHO data reveal that Delhi has the world’s worst air pollution with the highest PM 2.5 concentration levels among cities. Beijing, by comparison, is not even in the top 50 cities by air pollution.

Coming to concentration of PM 10 (particles between 2.5 to 10 µm in diameter), Delhi air recorded ‘severe’ rating for one day, ‘very poor’ ratings for three days, and ‘poor’ and ‘moderate’ ratings for one day each.

The daily PM 2.5 concentration rising to unhealthy levels, i.e. above 150 µg/m³ since December 6, 2015, has prompted Beijing to issue the first-ever “red alert” for pollution. The alert is a pre-emptive measure to protect the city’s citizens from a new blanket of smog expected to descend on the city over the coming days.

While schools in Beijing have been urged to close temporarily, odd-even number plate system for cars has been enforced.

The odd-even formula for private cars comes at a time when a similar measure announced by Delhi Chief Minister Arvind Kejriwal is being debated by lawmakers and civil society, with doubts being raised regarding the effectiveness with which the formula can be executed.

“First of all, this is Delhi, where being ill-informed and rich is a virtue. Most people have multiple cars and will just take out their second or third or fourth car—or buy a new one if required—to get around this rule,” Rajyasree Sen wrote in an article in Mint.

It is worth noting here that when the odd-even formula for private cars was enforced in Beijing for a two-week period starting August 20, 2015, the city’s usually smog-filled skies had turned perfectly blue.

The pollution level in India’s national capital has reached alarming proportions, prompting a bench of Delhi High Court judges to compare the city to a gas chamber last Thursday.

Unlike Beijing, Delhi currently has no formal mechanism for issuing alerts and advisories for pollution, leading the National Green Tribunal to recently issue a directive to warn people about the deteriorating air quality in the capital and suggest ways to deal with it.

Nearly half of the state’s 4.4 million school children are growing up into adults with irreversible lung damage, according to a report by the Kolkata-based Chittaranjan National Cancer Institute (CNCI).

PM 10 and PM 2.5 include inhalable particles that are small enough to penetrate the thoracic region of the respiratory system. The health effects of inhalable PM are well documented. They are due to exposure over both the short-term (hours, days) and long-term (months, years) and include:

- Respiratory and cardiovascular morbidity such as aggravation of asthma, respiratory symptoms, and an increase in hospital admissions; and

- Mortality from cardiovascular and respiratory diseases and from lung cancer.

There is good evidence of the effects of short-term exposure to PM 10 on respiratory health, but for mortality, and especially as a consequence of long-term exposure, PM 2.5 is a stronger risk factor than the coarse part of PM 10.