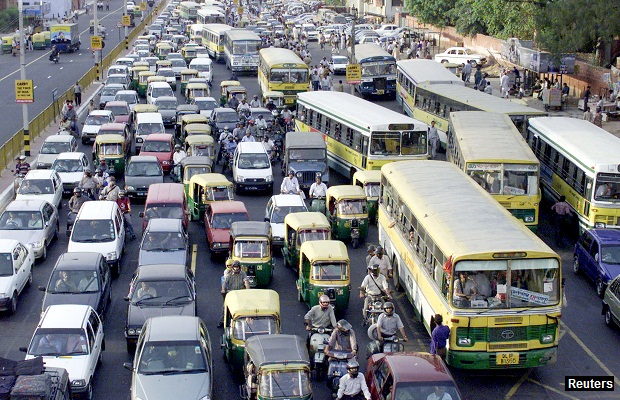 Scrambling to find a solution to the world's worst urban air, Delhi's government has decided to add 6,000 buses to support the odd-even vehicle formula.

It will not be an easy task to convince Delhi-ites to take the bus.

But vehicles per 1,000 people have increased 92% over the past 16 years, even as buses and their ridership declined, according to Delhi’s Economic Survey 2014-15.

The Delhi metro, which has a network of 187 km across seven lines, now carries 2.4 million commuters every day, but between the metro and the buses, mass transit clearly isn't adequate.

Metro ridership is expected to increase to four million once the third phase is complete and 117-km of line is added.

A third of households use cycles, but use is declining, as car ownership soars

Nearly 31% of Delhi's households use cycles as their primary mode of transport, which the city's plans have ignored.

Delhi is reported to have more than 8.8 million motor vehicles as on March 31, 2015, registering an increase of more than 6% over the previous year.

Many vehicles on Delhi's roads are not registered in the city

Delhi’s economic survey points to a contradiction: There are many more vehicles on Delhi's roads than those registered with transport authorities. This means many vehicles not registered in Delhi run on its roads.

Efforts are now being made by Delhi’s transport department to count the actual number of vehicles on the road, according to the economic survey.

Soaring pollution levels in Delhi have forced its government to formulate a controversial odd-even vehicle-numbering formula that hopes to get roughly half of its nearly 9 million vehicles off the roads, as we reported in the first part of this series.

The government has now acknowledged that if millions of vehicles cannot run, buses will be required to plug transit gaps.

Delhi also has 1,406 private buses running on 457 bus routes as part of its bus services.

The data clearly indicate Delhi's affinity for cars and two-wheelers, but India's vehicle ownership is low by global standards.