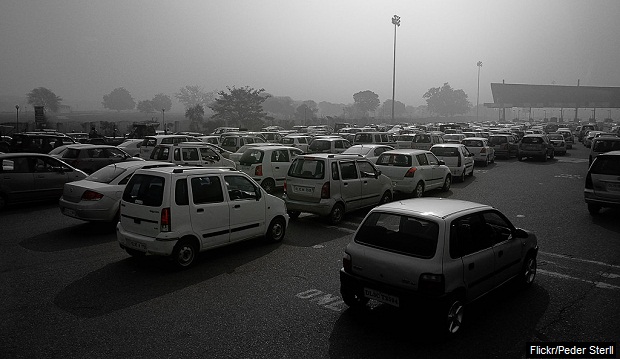 Air pollution levels in Delhi rose 23% during the second phase of the odd-even registration rule, from April 15 to April 29, over the previous 14 days (April 1 to April 14), based on an analysis of PM (particulate matter) 2.5 data, generated by IndiaSpend’s #Breathe air-quality monitoring devices.

The odd-even scheme ends today, April 30, 2016, the data indicating that it likely cannot work in the long term without additional action, such as improving bus services, curbing factory and truck emissions and suppressing construction dust--which accounts for about half of Delhi's air pollution. Wind speed and temperature also affect air quality.

The average PM 2.5 concentration in Delhi’s air was 68.98 micrograms per cubic metre (µg/m³) during the odd-even period, from April 15 to April 29, indicating "moderate" conditions, which increased from 56.17µg/m³, indicating "average" air quality between April 1 and April 14.

During the odd-even period, 7 am was the worst hour in Delhi, based on hourly averages between April 15 and April 29, with PM 2.5 levels indicating "poor" air-quality levels of 124.3µg/m3, a 31% increase (94.67µg/m3) in the hourly average recorded at the same time before the rule was implemented from April 1 to April 14.

Evening 5 pm was the best hour for Delhi during the odd-even phase, with PM 2.5 levels at 21µg/m3, indicating "good" air quality.

Similarly, the PM 10 levels during 7 am were as high as 243.967µg/m3, indicating "moderate" conditions, which cause respiratory illness on prolonged exposure. These levels rose 36% from 179.7 µg/m³ at 7 am, based on hourly averages of the 15 days preceding the odd-even period.

Getting a reliable picture of air pollution is inherently difficult due to Delhi’s changing weather conditions and constantly shifting patterns of emissions throughout the day, week, and year, IndiaSpend had reported. Moreover, some of the most important pollution sources lie outside the National Capital Region.

A growing tide of vehicles and pollution in Delhi, falling use of buses

Vehicles per 1,000 people in Delhi have increased 92% over the past 16 years, as bus and ridership declined, according to Delhi’s Economic Survey 2014-15.

Daily passenger ridership on Delhi Transport Corporation (DTC) buses declined 11% in 2014-15 over the previous year, and the number of buses has declined 24% over the past five years, from 6,204 in 2010-11 to 4,712 in 2014-15, IndiaSpend reported. Boosting bus services, we also observed, is key to sustaining the odd-even system.

Delhi was reported to have more than 8.8 million motor vehicles as on March 31, 2015, registering an increase of more than 6% over the previous year.

Heavy vehicles are major sources of PM 10 and oxides of Nitrogen (NOx). Trucks are leading polluters, contributing 46% of PM 10 and 38% of NOx; light commercial vehicles contribute 28% of PM 10 levels and 13% of NOx, as IndiaSpend reported previously.

Odd-even in other cities across the world

Mexico City started this rule as Hoy no Circula scheme (No Circulating Day) in 1989. The trial implementation during the winter months of 1989 resulted in a 20% reduction in daily vehicles in circulation within the target area, an increase in vehicle speeds, drop in fuel consumption and 6.6% increase in subway ridership.

Initially, the scheme reduced pollution 11%. But, once the rule became permanent, people purchased more vehicles with alternate plates. There was no improvement in long-term air quality levels during any hour of the day or the week. Pollutions levels increased during the weekends and hours of the day when the rule did not apply.

In Paris, similar restrictions were imposed for one day in 1997 and in March 2014. The experiment reduced pollution levels. Beijing implemented a temporary scheme before the 2008 Summer Olympics, cleaning the air and relieving traffic congestion.

In Sao Paulo, the scheme was initially implemented in 1995, as an emergency measure to curb air pollution. An experimental trial of six month showed 2% (morning) and 5% (evening) reduction in peak-period vehicular volumes. The initial experiment was successful in reducing pollution levels, especially carbon monoxide. The odd-even scheme known as Rodizio, was made permanent in 1997.