As the Delhi government announced emergency measures to tackle its toxic air, it was evident that the air across large swathes of north India was unsafe, as a satellite image from the US space agency revealed. 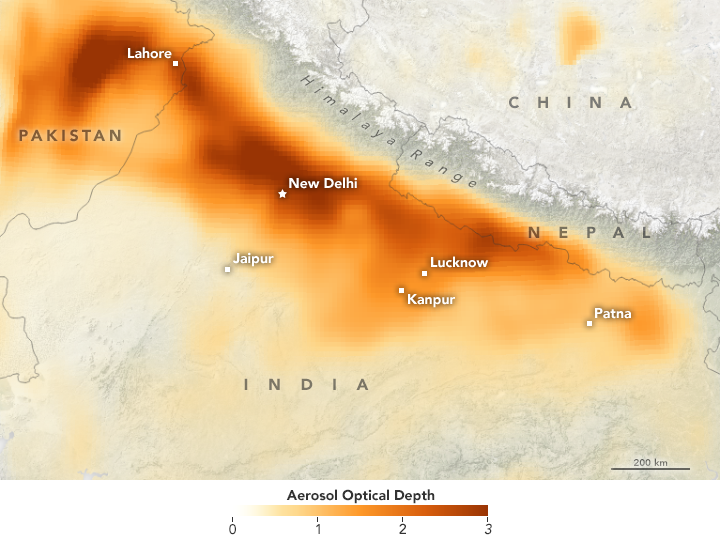 The ‘aerosol optical depth’ image--a measure of how airborne particles change the way the atmosphere reflects and absorbs visible/infrared light--shows skies thick with haze in red-brown and clear skies in white, according to a National Aeronautics and Space Administration (NASA) release on November 7, 2017.

Munirka in south-west Delhi reported the worst particulate matter (PM) 2.5 concentration at 968.28 μg/m³ at 9 am on November 7, 2017, according to an analysis of hourly averages for 48 hours, based on data from the IndiaSpend #Breathe air-quality sensor. The 24-hour average for Munirka (655.78 μg/m3) on November 7, 2017, was 26 times more than the World Health Organisation (WHO) 24-hour average standard of 25 µg/m³. It was also nearly 11 times more than the national ambient air quality 24-hour average standard of 60 µg/m³.

Pollution at four of eight locations in seven north Indian cities, analysed using IndiaSpend #Breathe air-quality sensors, showed “severe” (>250 µg/m³, or 10 times above safe limits) levels, based on the 24-hour average of PM 2.5, on November 7, 2017. Of the remaining four, three indicated “poor” (ranging between 91-150 µg/m³, nearly four to six times above safe levels) and one ‘moderate’ (61-90 µg/m³, about twice to three times above safe levels).

PM 2.5 are fine particulate matter found in the air with a diameter of 2.5 micrometres or less and are known to pose the greatest risk to human beings. Their measurement is considered to be the best indicator of the health risks from air pollution, according to the WHO.

Most parts of north India, including Delhi-National Capital Region (NCR) and neighbouring states like Haryana and Punjab, are masked in a thick blanket of smog. Pollution levels in the region have crossed severity levels with the Delhi government issuing a health advisory to citizens.

With a health emergency declared in the national capital, schools are to remain closed till Sunday, construction activities have been halted and the entry of trucks in the city are banned.

Air-quality levels in Delhi crossed “poor” eight times since October 8, 2017, “very poor to severe” 21 times and “emergency” once as they have for 48 hours to November 8, 2017, according to data from the government’s own alert system, IndiaSpend reported on November 9, 2017.

Chandigarh -- north of Delhi and the capital of both Punjab and Haryana-- reported the second worst air quality reading of PM 2.5 concentration at 606.19 μg/m³ on November 7, 2017 at 7 pm.

The sensor located near Lucknow’s Babasaheb Bhim Rao Ambedkar University reported 24-hour average of 130.23μg/m3 on November 7, 2017-- five times more the WHO standard and more than double the national standard.

Varanasi, located on the banks of Ganges and south-east of Lucknow, reported the lowest 24-hour average (75.17 μg/m³) on November 7, 2017 among all the eight sensors we considered. However, the hourly trends, indicate that the air quality in the city turned bad in the late evening of November 7, 2017, increasing to its 48-hour peak of 166.3 μg/m³ at 9 pm.

Why Delhi and its neighbouring states suffocate every year

Farmers from the neighbouring states--Punjab and Haryana-- burn post-harvest straw on their fields in October. With the onset of winter in November, the smoke, mixed with fog and industrial pollution, form a thick haze over these states.

Satellite images of active crop fires in Punjab and surrounding areas were released by National Aeronautics and Space Administration (NASA), the US space agency, on October 25, 2017. 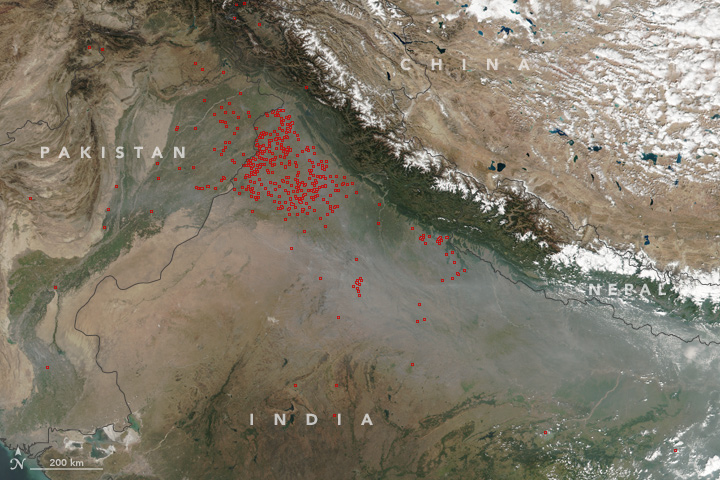 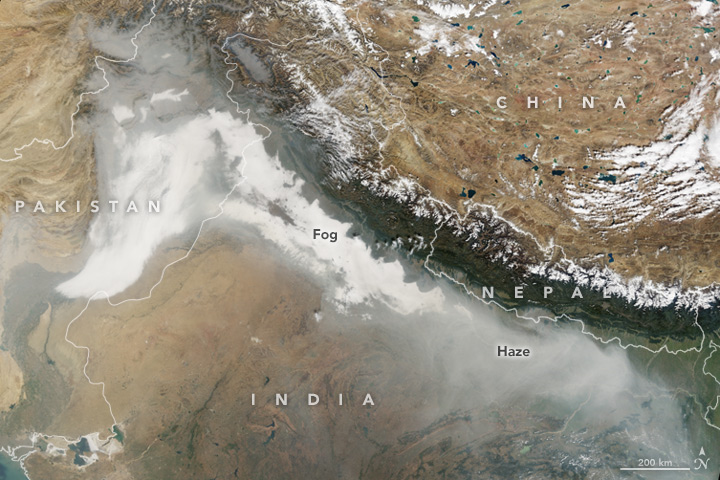 Stopping the practise of burning straw or stubble and other biomass could improve air quality in Delhi by 90%, according to a 2016 apportionment study by the Indian Institute of Technology, Kanpur, IndiaSpend reported on October 17, 2017.

“The immediate impacts of exposure to air pollution are primarily on the cardiovascular and respiratory systems,” Hem Dholakia, senior research associate at Council on Energy, Environment and Water, a New Delhi based non-profit, told IndiaSpend.

“New research shows that exposure to pollution can lead to premature deliveries as well as impact the neurological development in children. Some of the latest studies link air pollution with a higher risk of breast cancer.”

Dholakia said strong investments are needed for pollution monitoring. “In addition to measuring levels of pollution, networks are required to inform us of the sources of pollution in real-time,” he said. “The capacity across central and state pollution control boards needs to improved. We also require policy coordination across different sectors, civil society as well as investments in clean technology.”