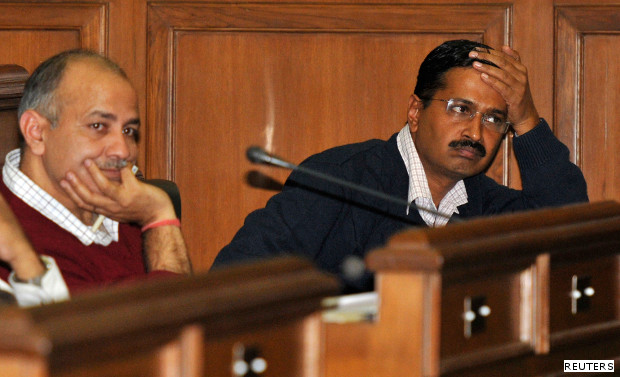 The devolution of financial power by New Delhi—the seat of India’s central government—continues to roil the states with the provincial government of Delhi rebelling, saying it would lose Rs 25,000 crore ($4 billion) over a decade.

In the course of presenting an interim budget last week, Delhi Finance Minister Manish Sisodia complained that since India’s capital is a union territory, it would not be able to cash in on recommendations by the 14th Finance Commission to increase central taxes to states from 32% to 42%.

“Had this recommendation been applied to Delhi, then Delhi would have received approximately Rs 25,000 crore during the award period (2015-2020),” said Sisodia, whose budget reveals his efforts to cobble together funds for electricity and water subsidies, which he intends to boost by 381% over a year.

“We don’t have funds,” B.B. Tyagi, chairman of the standing committee of East Corporation (Delhi has three municipal corporations, all run by the Bharatiya Janata Party). “Not only sanitation workers, even officials have not been paid for months.”

IndiaSpend has reported how Tamil Nadu, India’s leading welfare state, rebelled against the recommendations of the 14th Finance Commission.

These stands contrast with that taken by Jammu & Kashmir, where Finance Minister Haseeb Drabu said he would not go “begging” to Delhi for funds, as reported earlier.

“Delhi’s economy has a predominant service sector with a share of 87.48% of GSDP (Gross state domestic product), followed by industry and agriculture sectors,” said Sisodia. “The contribution of Delhi in service tax, income tax, corporate tax and custom & central excise is very significant compared to other metropolitan cities. In spite of that, Delhi’s share in central taxes remains stagnant at Rs 325 crore since 2001-02.”

Budget documents confirm the minister’s point: The national capital’s grant in lieu of a share in central taxes has indeed remained constant at Rs 325 crore.

As in Tamil Nadu, new subsidies do not help balance the budget.

The implementation of two key election promises of Sisodia’s Aam Aadmi Party (AAP)—a 50% reduction in power bills and 20,000 litres of free water per month—is expected to cost Rs 351 crore in 2014-15.

This year, financial prudence. Next year, not quite

Plan expenditure--used to create assets and invest in infrastructure--will drop to Rs 15,450 crore (from the budget estimate of Rs 16,700 crore); non-plan expenditure--mainly used to pay for the water and power subsidies, interest, salaries and other routine bills used to run government--to Rs 18,440 crore (from Rs 19,066 crore); and centrally-sponsored schemes--such as the National Health Mission and the Universal Education Scheme--to Rs 900 crore (from Rs 1,000 crore).

Next year’s budget includes an increase of 16.5% in non-plan expenditure to Rs 21,500 crore, which means continuing subsidies and government spending on itself; Rs 15,350 crore plan expenditure (reduction of 1%); and Rs 900 crore for centrally sponsored schemes (no change).

This land is my land. No, it is mine

Given the number of overlapping authorities, some controlled by central government departments, others by local government, land is another bone of contention between Delhi and New Delhi.

Money spent to buy land from the Delhi Development Authority (DDA), run by the Union government, could be spent on development of the city’s infrastructure, Sisodia said in his speech.

“It is highly desired that land should be made available to the city government free of cost for infrastructure development,” he said. “The huge resources accumulated with DDA must be shared for the development of the city. (The) state government has no direct role in the city planning made by DDA. A metropolitan planning body is required for the comprehensive development of the city, which will also address the specific issues of development of social and physical infrastructure for unplanned settlements, unauthorised colonies and rural areas of Delhi.”

The minister promised a full budget and to “work in complete partnership with the common man for (sic) addressing their issues . . . and for preparation of future plans”.