Delhi Continues To Top World’s Most Polluted Megacities List: WHO 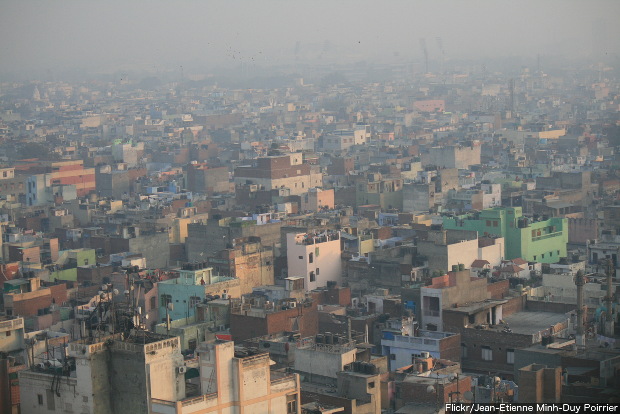 Delhi's air is the worst among world megacities, the World Health Organisation (WHO) confirmed recently, even as IndiaSpend's #breathe network of air-quality sensors reported fine-particulate-matter (PM2.5) levels were almost four times above daily safe levels, on average, for the seven-day period from September 22 to 28, 2016.

For long-term exposure, these 24-hour levels are nearly 11 times above the WHO health standards.

Over the monsoons, Delhi's air was relatively cleaner because the rain and wind diminished the impact of pollutants. But with the season changing, three of our five sensors in the National Capital Region (NCR) registered "poor" to "very poor" air-quality levels from September 22 to 28, meaning prolonged exposure affects healthy people and "seriously impacts" those with existing disease.

In 2012, with one million deaths, China reported the highest toll from PM2.5 and PM10 pollution. At the time, India followed, reporting 621,138 deaths, nearly 10% of the global toll (6.5 million deaths) associated with outdoor and indoor air pollution.

However, between 2011 and 2015, in a comparison of megacities with population above 14 million, Delhi's ambient air-pollution levels were worse than Beijing and Shanghai, an IndiaSpend analysis of the WHO’s 2016 data of global ambient air pollution showed.

Delhi recorded a PM10 level of 229 µg/m³, followed by Cairo with 179 µg/m³ and Dhaka with 158 µg/m³ - the top three megacities with the most polluted air globally. Beijing and Shanghai were sixth and seventh on that list.

India's capital was the only megacity to record a PM10 level above 200 µg/m³, exceeding the WHO air quality standard of 20 µg/m³ by more than 900%.

Even Kolkata and Mumbai—recording PM10 levels of 135 µg/m³ and 117 µg/m³ respectively—had air worse than the biggest Chinese cities.

PM10, or coarse particulate matter with diameter between 2.5 and 10 micrometers, are primarily made up of dirt and dust from farming, factories and roads, and caused due to the crushing of rocks and soil.

Most air-pollution deaths are caused by fine, invisible particles, called PM2.5, about 30 times finer than a human hair. These pollutants, if inhaled deep into the lungs, can cause heart attacks, strokes, lung cancer and respiratory diseases, and are known to pose the greatest risk to human beings. Their measurement is considered to be the best indicator of the level of health risks from air pollution, according to the WHO.

The WHO’s new air-quality model, it’s most comprehensive yet, is based on information from satellite measurements, air-transport models and ground-station monitors for more than 3,000 urban and rural areas across the world. It analyses this with population data in a grid pattern area of 10 sq km. It was developed by the WHO in collaboration with the University of Bath, United Kingdom and confirms that 92% of the world’s population lives in places where air quality levels exceed WHO limits.

"Air pollution continues take a toll on the health of the most vulnerable populations – women, children and the older adults," said Dr Flavia Bustreo, Assistant Director General at the WHO.

Some three million deaths every year are linked to exposure to outdoor air pollution, according to the WHO. Nearly 90% of air-pollution-related deaths occur in low- and middle-income countries, with nearly two out of three occurring in WHO’s south-east Asia region (of which India is a part) and the western pacific region.

Inefficient modes of transport, household fuel and waste burning, coal-fired power plants, and industrial activities are the major sources of air pollution, the WHO said.